In tough times, relying on the Jewish community for help 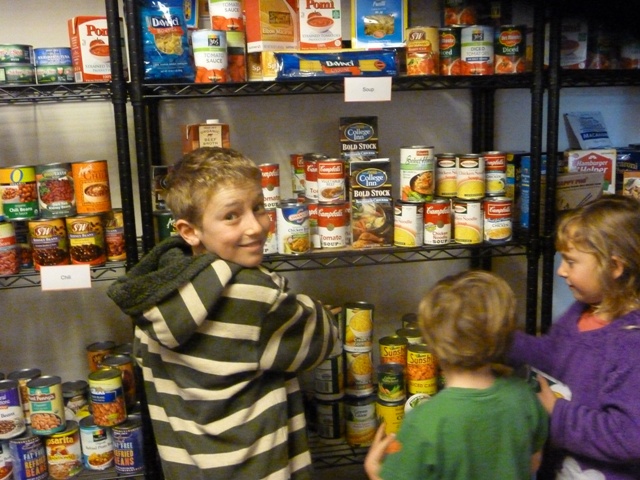 Young volunteers at the Jewish Family and Children's Services in San Francisco help the agency feed the hungry at Chanukah and throughout the year. (Courtesy JFCS, San Francisco)
Advertisement

BOSTON (JTA) — In August, in the heat of the summer, a Boston-area mother of three began to worry about how she would pay for Chanukah gifts. Across the country in San Francisco, a 33-year-old Russian-born mother of six said that thinking about this Chanukah made her cry.

Both women — Lauren of Boston and Lilya of San Francisco (they asked that their last names not be used) — are struggling in a down economy to provide for their families. Still, they are hopeful that with support of Jewish organizations, they will find meaningful ways to celebrate the eight-day Festival of Lights.

As American Jews prepare to celebrate Chanukah, which this year begins on the evening of Dec. 20, Jewish social service agencies across the country are gearing up to help the growing number of needy American families.

In the five boroughs of New York City, the magnitude of Jewish need is huge, according to William Rapfogel, CEO of the New York-based Met Council, a Jewish anti-poverty agency. Even before 2008, when the recession hit, Rapfogel estimated that one-third of the 1 million Jews living in New York City live at or near poverty.

Since ’08, more middle-class and upper-tier earners have experienced job loss and other financial crises.

“There now really is no unaffected group, except maybe the very top income earners,” Robert Moffitt, a professor of economics at Johns Hopkins University, told The Associated Press. “Recessions are supposed to be temporary, and when it’s over, everything returns to where it was before. But the worry now is that the downturn — which will end eventually — will have long-lasting effects on families who lose jobs, become worse off and can’t recover.”

At Chanukah, Rapfogel expects his agency to distribute 15,000 to 20,000 toys. In New York, kosher pantries serving those in need will offer Chanukah food, he said.

Understanding the growing need for families, Lauren began calling Jewish groups in the summer hoping to get a head start to arrange for her three young sons to receive Chanukah gifts. She has tried to manage the gift-giving expectations, but admits it’s stressful.

Three years ago, her middle-class family faced an unpredictable crisis that left Lauren to raise her children on her own. Lauren sold her home and is living in a smaller house with the financial support of her family. She is juggling four separate part-time jobs, from caring for an elderly blind woman to office work for a seasonal service company.

Her children participate in the Jewish Big Brothers and Big Sisters program in New England, which provides some gift cards and will host a Chanukah party for its families.

Lisa Cohen, a licensed social worker and vice president of programs and services for the organization, says the program is inundated at Chanukah time.

“We anticipate a lot of tough stories this year,” she told JTA in a phone interview. Noting that the hard times have hit middle-class families, Cohen said, “We hadn’t experienced that as much before.”

Chanukah once was Lilya’s favorite holiday. She had immigrated to America in 1993 at the age of 14 with her parents and siblings. After she married, she would decorate her home and host a large family gathering, setting a table with special Chanukah dishes.

But last year, Lilya ended a difficult marriage and now is the sole support of her children. She is struggling to find work.

Lilya, trying to make significant changes in her life, says staff members at Jewish Family and Children’s Services in the San Francisco Bay Area have helped with everything from resume-writing assistance to emergency funds and supermarket vouchers.

Jewish Family and Children’s Services in the Bay Area over the last several years has seen an increase in families who had never utilized a social service agency, said Gayle Zahler, the agency’s associate executive director. She said her agency will see a 15 percent increase in the number of families seeking help, with a total of 3,000 families in some kind of economic distress.

At Chanukah, people feel more isolated, Zahler says. Her agency maintains five regional food pantries, including one at the San Francisco office. For the High Holidays it collected a record 11,000 pounds of non-perishable food. The office is gearing up for a similar drive for Chanukah, she said.

Rapfogel says the proximity this year between Chanukah and Christmas on Dec. 25 has an impact on how the holiday is observed. Even in predominately Jewish neighborhoods, Christmas ornaments and decorations are on full display.

“It’s a fact of life. There’s pressure on families to buy gifts,” he said.

For retailers, that proximity provides some optimism.

Naftoli Versch, who directs Internet marketing for Rite Lite, a large manufacturer of seasonal Judaica, told JTA that when the two holidays fall at approximately the same time, retailers can market the holidays together.

And Chanukah already is the biggest season for Rite Lite, which this year is offering 50 new products for the holiday. Expected to be among the most popular are home-related items such as Chanukah cupcake kits and environmentally “green” products, including organic vegetable wax candles in a biodegradable box.

The economy plays an important role in how Americans celebrate Chanukah, according to Dianne Ashton, whose book “Hanukkah in America” will be published next year. At the end of the 1800s, when Christmas became more child-centered and sentimental, the rise of department stores led to gift giving for children for both holidays.

By contrast, in the 1930s, during the Depression, the Jewish women’s magazine Women’s League Outlook featured paper cutouts for a headband for kids that had paper candle holders, like a Chanukah menorah. Throughout American history, Chanukah has offered Jewish families the opportunity to shape celebrations that are meaningful to them in their own homes, Ashton said.

“It will continue to be shaped by American Jews as they wish to shape it,” she suggested.

Last year, Lilya didn’t decorate her house. Her 14-year-old daughter told her that it didn’t feel like a holiday. That saddened Lilya, so this year she intends to bring her children to community Chanukah programs.

For Lauren, Chanukah is a time to slow down her family’s hectic pace to celebrate the holiday, using homemade menorahs and dreidels her sons made in Hebrew school — the local Chabad congregation provided a scholarship that allows her sons to attend Hebrew school and summer camp.

Lauren sees a positive outcome from the upheaval in their lives.

“This has brought me closer to Judaism,” she said. “My boys wouldn’t be in Hebrew school.”