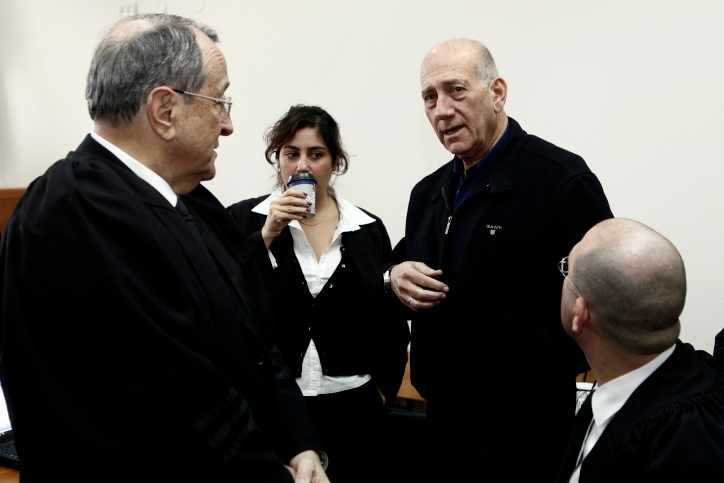 JERUSALEM (JTA) — The indictment of former Prime Minister Ehud Olmert and 17 other Israelis on charges related to one of the largest real estate scandals in Israeli history is the latest shoe to drop in a country where political corruption has come to be seen as an epidemic.

The indictment issued Jan. 4 alleges that Olmert and several other Israeli officials accepted millions of dollars in bribes to promote a series of real estate projects, most prominently Jerusalem’s controversial Holyland development.

“There are so many ironies in the case,” said Stuart Schoffman, a fellow at Jerusalem’s Shalom Hartman Institute. “Israel is supposed to be the holy land. This project is called the Holyland, and yet it’s the most unholy business you can imagine.

“It’s like we’ve turned into ‘Boardwalk Empire,’” he added, referring to the popular American television show about corruption in Prohibition-era Atlantic City, N.J.

Olmert, who has denied any wrongdoing, already is standing trial regarding separate allegations that he illegally accepted funds from U.S. businessman Morris Talansky and double billed Jewish groups for speaking trips abroad.

The corruption charges stem from alleged activities before Olmert became prime minister, an office he assumed in 2006 after a stroke left Ariel Sharon in a permanent vegetative state. Olmert resigned as prime minister in 2008 amid mounting allegations of corruption.

The scope of the latest charges is even greater than the previous ones both in terms of the amount of money involved and the large number of people who have been indicted, including a brother of Olmert’s, a longtime aide and his successor as mayor of Jerusalem.

In this case, Olmert is accused of taking bribes worth about $470,000.

The indictment alleges that his brother, Yossi Olmert, received $150,000 and that the former prime minister’s bureau chief, Shula Zaken, got about $100,000.

“This will only hit home when Israelis see him entering prison,” said Gil Hoffman, political correspondent for The Jerusalem Post. “When you have this many investigations, the best lawyer in the world couldn’t get him out of this.”

At the center of the indictment is the Holyland project, a hilltop complex of interlocking apartments that dominates the skyline of southwestern Jerusalem. Jerusalemites have nicknamed the project of three large buildings and an even larger tower “The Monster.”

There’s even a cynical joke making the rounds:

Q: Where’s the best place to live in Jerusalem?

A: The Holyland because it’s the only place in the city you don’t have to look at the Holyland project.

The indictment says the alleged crimes took place while Olmert was mayor of Jerusalem, a post he held from 1993 to 2003. According to the indictment, Olmert pushed through changes in zoning laws and stonewalled hundreds of objections. He also reportedly used some of the money he received to cover his campaign debts.

The indictment also alleges that Uri Lupolianski, then a Jerusalem city councilman and later mayor, solicited donations for a charity he founded that lends out medical equipment.

The state’s case is based on a middleman who turned state’s witness. His name is being withheld under a gag order; he’s being referred to only as “S.” He reportedly is in ill health, and the prosecution has asked for a speedier trial.

However, Israel Television Channel 2 showed video of the state’s witness, with his face blurred, shopping recently for a new suit in an expensive Tel Aviv boutique. Israeli media outlets have reported that he not only is receiving immunity from prosecution but also an “allowance” from the government.

Olmert insists that the state’s witness is lying.

“The state witness in the Holyland case is an abominable liar, but instead of putting him in jail, you’re paying him and bribing him,” Olmert yelled at police interrogators during an interrogation session, according to Haaretz. “The only one paying bribes in this project is the State of Israel.”

The new indictment against Olmert comes weeks after former President Moshe Katzav began serving a seven-year jail sentence for rape, sexual harassment and obstruction of justice. Olmert’s trial on the latest charges could last for several years, as did the prosecution of Katzav.

Israeli Foreign Minister Avigdor Lieberman has been under investigation for corruption for more than a decade. Police say they expect to issue an indictment in the coming months.

The Jerusalem Post’s Hoffman said he believes that Olmert’s indictment will serve as a warning to other Israeli politicians.

“In the past, Israeli politicians might have felt they could get away with such things,” he said. “But now they’re running scared. They’re afraid of doing anything even borderline because they’re afraid they’ll get caught.”