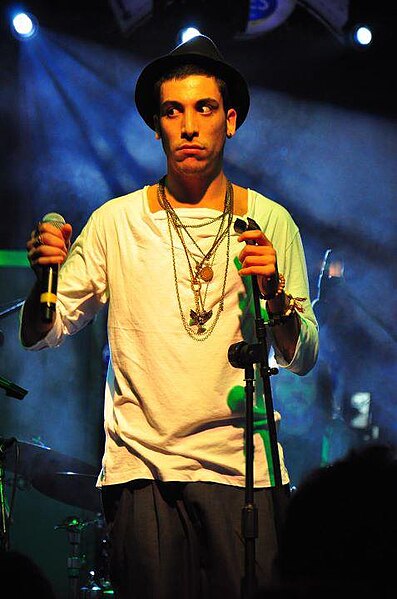 Jewish fans of the Eurovision song competition have added incentive to follow the competition this year.

Turkey is sending a Jewish representative to the Eurovision song competition in Azerbaijan.

Can Bonomo of Izmir was Turkey’s pick for the annual songfest, Zaman’s online edition reported Tuesday. This year’s contest will take place in Baku, Azerbaijan, in May.

EuroVisionary, a Eurovision fan site, describes the 24-year-old singer-songwriter’s style as "Istanbulian music that works with tunes from Alaturca to international indie style" with the Shins, Wax Poetic, the Kinks, the Libertines and the Beatles as influences.

Pre-dating American idol by several decades, the winner of the competition earns their country to honor of hosting the event the following year.

In case you haven’t heard, Turkey has had a strained relationship with Israel as of late. It’s not a new phenomenon. In 1979, Turkey withdrew from Eurovision because it was scheduled in Israel. (Israel won with the song "A Ba-Ne-Be" on the first night of Passover in 1978. Israel won again in 1979 with "Hallelujah," which you’ve probably heard if you’ve ever done anything remotely campy with an Israeli.)

But how do the Jews of Turkey relate to their country? And to Israel?

This 1932 report noted the lack of the Jewish minority population’s autonomous rule within Turkey:

One need not live long in Turkey to realize that there is no Jewish leadership there at all. The Jewish community in Turkey,— once the highest and most flourishing Jewish community in the entire East,— has now been degraded to a point where no one takes an interest in organizing Jewish life. Istanbul, once counting eighty thousand Jews now is but a small, lifeless community, having no Rabbinate, no Jewish central organizations and even no Kehillah.

Similarly is the situation in Smyrna, now called Izmir. Only a few years ago there were forty thousand Jews in Izmir having eleven Synagogues and numerous philanthropic Jewish organizations in addition to the great number of educational institutions. Today Smyrna counts about fifteen thousand Jews only, one-half of its Synagogues being closed down and most of its institutions have no means of existence.

The report also noted that while Jews in Turkey were inclined to emigrate, it took some time for them to warm up to the idea of a Jewish state in Palestine:

There was a time, — right after the occupation of Palestine by the British Government, — when Zionism was a movement highly despised by the Turkish Jews. The average Turkish Jew being a Turkish patriot could not digest the fact that Palestine was actually taken away from Turkey. Even the Balfour Declaration which promised to establish Palestine as a Jewish National Home could not make the Turkish Jew change his mind in favor of England controlling Palestine. To him, Palestine was his country only when controlled by Turks. Today this hostile attitude towards Zionism and towards British rule in Palestine is gradually disappearing among the Jews in Turkey. The average Turkish Jew, even though remaining a Turkish patriot, is forgetting his grouches against Zionism and is only too glad of an opportunity to migrate to Palestine. The Turkish government, too, is not opposed to the existence of the Zionist movement in Turkey any more as it was the right after the war. The degradation of Jewish life in Turkey side by side with the upbuilding life in Palestine is therefore stimulating more nationalistic feelings among the Turkish Jews. They do not now see their future in Turkey but many of them see it clearly in the neighboring Palestine. Every steamer which sails from Istanbul and Smyrna is therefore carrying several Jewish families from these places to Palestine.

For some fascinating insights into the Jewish history of Izmir before Eurovision this May, read the report.

Otherwise, feel free to bob your head let your heart melt American Idol-style as a Jewish Mediterranean dude serenades you at Eurovision 2012.