Young Filipinos integrating into Israeli society, but not without difficulties 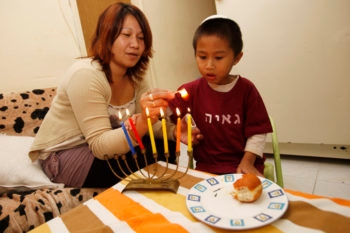 Filipinos light Chanukah candles in their home in South Tel Aviv on Nov. 24, 2010 in advance of the Jewish holiday. (Miriam Alster/FLASH90)

TEL AVIV (JTA) — With eyes closed, it would have been difficult to guess that the female voice with the amazing range singing a Hebrew classic was a shy-looking, 11-year-old Filipina.

But there was Kathleen Eligado performing Miri Aloni’s “Ballad of Hedva and Shlomik” before a prime-time television audience of a million Israelis. Eligado, born in Israel to Filipino migrant worker parents, is one of the stars of the popular Israeli show “Music School,” a kind of “American Idol” for kids, finishing the season in second place.

Her performance gave new meaning to the quintessentially Israeli song. Lyrics written to describe the culture shock of leaving the kibbutz for the city — “I’m alone in a strange city, as if I have no choice” — seemed in Eligado’s rendition to be the blues of a Third World immigrant who ends up in Tel Aviv.

Yet for Eligado and thousands of other children of foreign workers from the Philippines and elsewhere, Israel is now home — for many, the only home they have ever known. Some came to Israel as children; others were born in the country. Tel Aviv alone is home to an estimated 3,600 children of foreign workers and asylum seekers, according to the city’s municipality data.

As they integrate into Israeli society, the children of foreign workers are crafting identities that are similar yet distinct from those of the country’s Jewish majority.

Of all the nationalities represented among migrant workers, Filipinos are the quickest to integrate, said Tamar Schwartz, a social worker at Mesila Aid and Information Center for the Foreign Community in Tel Aviv.

“Compared to other migrants, Filipinos usually speak articulate English, often are well-educated and have a strong family ethic that emphasizes discipline and respect for elders,” Schwartz said. “And incidents of child abuse are low. As a result, there is less of a gap between them and Israeli society, which makes it easier for them to integrate.”

But while Filipinos excel at integrating into Israeli society, the biggest challenge is avoiding deportation.

In 2006, under pressure from advocacy groups, the Israeli government — in what was billed as a one-time-only measure — provided about 900 children with permanent residency. Their close relatives — parents and siblings — received temporary residency, which would become permanent only after the children served in the Israel Defense Forces.

Among the children who received permanent residency in ’06 is Jewellri Joy, 18, now serving in the IDF Police Corps. Like many children of foreign workers living in Tel Aviv, the Israeli-born Joy, whose mother is from the Philippines and whose father is from Thailand, attended the Bialik-Rogozin School.

Most of her fellow students were children of foreign workers and asylum seekers, along with immigrants from Ethiopia or the former Soviet Union and a few native Israelis. Still, Joy said that growing up in south Tel Aviv made her “totally” Israeli.

While her family attends Mass at St. Anthony’s Church in Jaffa and celebrates Christian holidays, not Jewish ones, she said she would have no problem dating or marrying an Israeli Jew. Joy said that one of the main reasons she enlisted in the IDF was to provide her family with permanent residency.

In 2010, the Israeli government approved the recommendations of an interministerial committee to provide residency to an additional group of children and their families. To qualify, the child had to speak fluent Hebrew and be enrolled in the first through 12th grades of a state school during the 2010-11 school year. The child’s parents had to have entered Israel legally, even if they had since overstayed their work permit.

About 800 children were said to have met the criteria, but they are still waiting to receive their residency status. About 400 children were rejected and thus slated for deportation.

Unlike Joy, the majority of children of foreign workers have yet to receive any sort of legal residency status, Schwartz said.

Janelle Pancho, 16, born in Israel to Filipino parents, wanted to join her 11th-grade classmates at Herzliya’s Harishonim High School on a trip to Poland to visit Auschwitz. But without residency status, she cannot leave the country.

“I went to the local Interior Ministry office to get a special visa, but the clerk rejected my request,” Pancho recalled. “Then she asked, ‘Why haven’t you been expelled from the country?’ “

Pancho said she thought that she had not received residency because of a bureaucratic mix-up.

Unlike children of migrants in south Tel Aviv, Pancho attended schools where the vast majority of her fellow students were Jewish Israelis.

“Even though I am not Jewish, I feel a part of it,” she said. “I’ve been invited over to my friends’ houses for Shabbat and Jewish holidays. And we even celebrate Passover at home, though not the way it is supposed to be done.”

But without residency status, Pancho will not be able to undergo her peers’ most important rite of passage — army service.

“All of my friends are beginning to get letters from the IDF to prepare for the first stage of draft. But I haven’t,” she said.

Pancho said she respected the Israelis’ desire to maintain a strong Jewish majority in Israel.

“I understand that this is supposed to be a Jewish state and that I am Christian,” she said. “But my parents came to this country as guests. They came to work. They have a right to establish a family. And there was nothing in the law that said that they were not allowed to.”

A survey conducted in November 2010 by Leah Ahdut and Karin Amit of the Ruppin Academic Center’s Institute for Immigration & Social Integration found that 49.5 percent of Israelis said they were in favor of giving citizenship to migrant workers’ children born in Israel while 42.5 percent said they were opposed. Arab, left-wing, secular or university-educated Israelis were more in favor. Religious and haredi Orthodox Israelis were less supportive.

But even after they have received citizenship, completed IDF service and seemingly integrated into Israeli society, some Filipinos still grapple with their split identity.

M., 24, fell in love with an Israeli Jew while serving in the IDF — first as an officer manager for a high-ranking officer and later as a noncommissioned officer tracking down soldiers who went AWOL.

“I hid it from my mother for a year,” said M., who requested anonymity to avoid hurting her mother, who is a devout Catholic.

“When my mom found out she kicked me out of the house,” she said.

Now M., who owns a women’s apparel boutique in an affluent town that is cultural light years from where she grew up in south Tel Aviv, lives with her boyfriend’s family.

“They have accepted me completely, as though I were a member of the family,” she said.

M. said that she celebrated Chanukah with her boyfriend and his family, but they also bought a Christmas tree. She cooked traditional Filipino Christmas foods like leche flan and pancit, a type of noodles that symbolizes long life.

“I also made them Siopao — Chinese buns — but I filled them with chicken instead of pork,” she said. “My boyfriend and his family are Jewish, you know.”