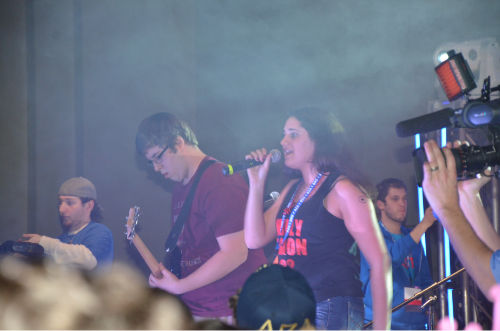 The Archive Blog is wrapping up a spirited weekend in Atlanta with an exceptional group of about 900 youth from 13 countries and over 100 professional staff of BBYO.

[[READMORE]]
One of the most rewarding e-mails I’ve fielded since working with the JTA Archive came from Oz Fishman and Samantha Levinson, international teen presidents of BBYO.

In November, six months after the JTA Archive was made available to the public, Fishman and Levinson reported that they had discovered this resource in search of information about the history of their organization. We found out from them that JTA used to send a correspondent to BBYO conventions each year.

The history of BBYO is rooted in auxiliary boys’ and girls’ B’nai B’rith organizations, called Aleph Zadik Aleph (AZA) and B’nai B’rith Girls (BBG), whose activities date back to the 1920s. A pocket-sized manual given to each dues-paying AZA and BBG teen highlights these rituals and chronicles the key events and teen leaders of the organization.

Since parting ways with B’nai B’rith in 2001, the organization and its rotating cast of teen leaders have preserved the core principles, rituals and Hebrew titles of the group’s leadership positions that date back almost 90 years. At this year’s international convention, Jacob Levy of Eastern Region Virginia Council and Ryan Ladd of Texas’s Lone Star Region led a Friday night service dubbed "AZA through the decades"  for more than 100 male participants, which wove traditional Shabbat liturgy with stories, photographs and news clippings about the organization’s history.

This year’s conference generated buzz for its "Stand Up" campaign, marked by a day of service learning programming on Friday and scheduled to be celebrated Sunday night with a performance by hip hop musical act Chiddy Bang. Still, historical elements of BBYO were central to this year’s convention: elections for the international board and an essay contest for boys and girls were cause for excitement. Plus, thanks to a partnership with the American Joint Distribution Committee — which in 1934 offered insight into Jewish youth activities in Nazi Germany — the convention also boasted Jewish teens from Albania, Bosnia, England, Ireland, Israel, Latvia, Macedonia, Turkey and Ukraine.

During this year’s convention, the legacy of BBYO was repeatedly invoked by teen leaders as they internalized the theme "Our Tomorrow Starts Today."

In a joint address to AZA and BBG participants Saturday night, Levinson and Fishman expressed a determination to leverage the organization’s past accomplishments to set the agenda for the future.

"What will be our generation’s Soviet Jewry movement?" asked Levinson.

Image: BBYO teens perform for their peers at the 2012 International Convention. (Adam Soclof/JTA)