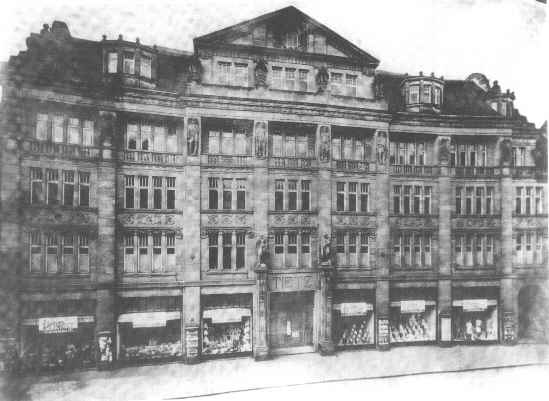 If you were shopping for clothes in Germany at the turn of the 20th century, odds are you would have wound up at a department store owned by the Tietz family.
[[READMORE]]
On Mar. 1, 1882, Hermann Tietz and nephew Oscar Tietz opened the Tietz department store in Gera. From a JTA article in 1932:

Berlin, Mar. 2 (JTA) – The great firm of Hermann Tietz, which owns the largest network of department stores in Germany and in Central Europe, with branches in all cities and big towns, celebrated its 50th. anniversary yesterday. The first store was opened in Gera on March 1st., 1882, by Hermann and Oscar Tietz. It was a small shop, which grew rapidly, however, and before long Oscar Tietz moved to Munich where he established the first German department store.

New branches of Herman’s company would open across the nation, including a large Berlin store in 1911. In 1927, the Hermann Tietz Co. acquired Kafhus Des Westens — today the largest department store in Germany — from its Jewish founder, Adolf Jandorf.

Shortly after Tietz’s golden jubilee celebrations, Nazi aryanization laws forced Jewish owners out of these stores, and the Tietz family fled in 1938. With new ownership in place, the stores assumed new names. In the early 1950s, the Tietz’s was awarded restitution from the German government.

In 1995, shortly after the centennial celebration of Hertie department store, JTA wrote about how the company came to terms with its complicated past:

The Tietz family was one of the most prominent pre-war Jewish business families in Germany. Yet in a 26-page brochure commemorating more than 100 years of [Hertie]’s existence, the company has little to say about the fate of its namesake. In four short paragraphs recounting the events of 1993 [sic – actual year: 1933], the year Hitler came to power, the company notes that "the political situation worsened the living conditions for a large company that found itself owned by a Jewish family."

As to their fate, the book said, "The Tietz brothers removed themselves from the company and left the country." Hertie spokesman Elmar Kratz acknowledged that the wording made it sound as if the Tietz family voluntarily gave up its business and decided to move abroad. "This is not an easy period to deal with," Kratz said.

JTA has several articles tracing the successes and woes of the Tietz family, which you can read here.

Archive Notes: Hermann’s brother, Leonhard, had established his own Tietz department store in Cologne, Germany in 1880; under Nazi owndership, the store became known as Kaufhof … Despite the title of this blog post, Tietz was not actually affiliated with Macy’s, although the latter also had a strong Jewish connection. Founded in 1877 by David May to serve Leadville, Co. gold miners, the department store chain was later co-owned by brothers Nathan and Isadore Straus, whose family immigrated from Germany in 1854, beginning in 1888 … Separately, you can also read about Ludwig Tietz, physician and heir to the Tietz department store family who was murdered in an attack by Nazis in 1933.