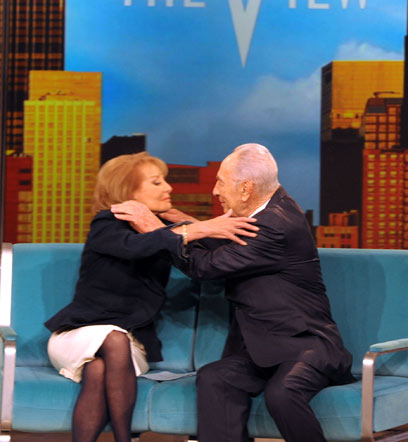 Just to clarify, they are trying to kiss each other, not to choke each other. (Moshe Milner, PMO)

Israeli President Shimon Peres made it to New York City earlier today, as part of his visit to the U.S. prior to the AIPAC Policy Conference this weekend, and what better way to start his trip than with a visit to “The View” for an interview with Barbara Walters. That’s right, “The View.”

Peres was suave as usual. When Walters asked him about his feelings being surrounded by so many women, he cited the many Israeli women in positions of power and said, “I feel really at home.” He also said that the difference between being a prime minister and a president in Israel is that “the prime minister rules, the president is charming.”

Walters quickly jumped to the burning topic of the moment — Iran. Citing speculation about a possible Israeli attack, Walters asked Peres about the possibility of Israel not notifying the U.S. in advance. Peres, diplomatic as usual, said that the U.S. and Israel agree that a nuclear Iran would be dangerous, that Iran shouldn’t have a bomb and that “all options are on the table.”

Peres garnered applause at several moments, first when he said that the relationship between Israel and the U.S. was never better as far as security goes, next when he  asked the people in the audience if they want to be his Facebook friends and when when discussing his age, 89.

Walters (a fellow octogenarian) told Peres that since they have known each other for some time, she has to give him a kiss. Peres didn’t resist. So at age 89, Peres is on Facebook, finagled a televised kiss and got me to watch 10 minutes of “The View”! You’ve still got it, Shimon!

Watch the video here, with a better version of the video to come.