Is the Israeli home front ready for war with Iran? 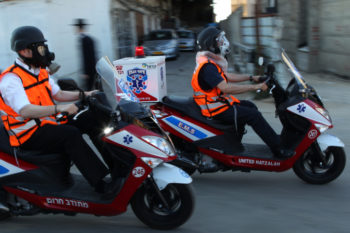 JERUSALEM (JTA) – Shira Morgenstein, a 38-year-old secretary, rushed from her exercise class at the Hebrew University swimming pool to pick up her daughter from preschool.

“Who has time to think about war with Iran?” she laughed as she tossed her wet bathing suit into her bag. “I don’t even have a shelter to run to, but too much else is going on.”

With the drumbeat to war intensifying from Washington to Jerusalem, security analysts seem to agree on what Iran’s response to an Israeli attack might look like: concentrated and prolonged missile attacks on Israel from the Islamic Republic and its proxies, Hezbollah in Lebanon and Hamas in the Gaza Strip, and a campaign of terrorist attacks on Israeli and Jewish targets overseas. Iran might even use chemical and biological weapons.

With such a dire scenario, Israel is facing an urgent question: Is the home front ready for war?

Zeev Bielski, chairman of the Knesset subcommittee on Israel’s home defense, says the answer is an unequivocal no.

The first layer of defense is likely to be Israel’s missile defense systems. But one system, David’s Sling, which is meant to destroy incoming medium-range rockets, probably won’t be operational at least until 2013. Another, the Arrow, which was developed in conjunction with the United States at a cost of more than $1 billion and was specifically designed with Iran’s Shehab missiles in mind, has never been tested in real-life combat.

A third, Iron Dome, has intercepted short-range rockets from Gaza, but Israel only has three Iron Dome installations while experts say the country needs at least 12.

“The systems we have will cut down on the damage that the missiles can cause, but they cannot completely prevent it,” Yiftah Shapir, director of the military balance project at Tel Aviv University’s Institute for National Security Studies, told JTA. “Some of those missiles will make it to Israeli population centers. Israel should be ready for a long period of attacks, perhaps even months, and this may bring commerce and other aspects of civilian life to a halt.”

Iran has hundreds of Shehab-3 missiles, and Hezbollah is said to have at least 40,000 missiles and rockets, many of which are sophisticated, long-range weapons that can reach almost any part of Israel.

“Israel’s major cities have never come under attack,” Shapir said. “This will be a very different and difficult experience for Israeli civilians.”

A little more than a year ago, the Defense Ministry established the Civil Defense Ministry to take responsibility for home-front defense. But the office has no budget, staffing or authority. A report in December by the state comptroller, the government’s internal watchdog agency, criticized local authorities for failing to conduct home-front emergency drills.

According to a 1992 law, all new residential buildings in Israel must be built with a reinforced room that can withstand rocket and missile attacks. The rooms were meant to phase out public bomb shelters that date back to the 1950s. But some 1.7 million Israelis still have no access to any type of physical protection, according to Bielski.

In addition, some 40 percent of Israelis do not have gas masks, which are considered crucial in the event of a chemical or biological attack. Bielski says Israel has an additional 1 million masks in storage — to be released if a state of emergency is declared — but that would leave 2 million people without masks. The $330 million it would cost to get masks and other provisions to everyone is not in the government’s budget, according to Bielsky.

The Prime Minister’s Office and the Finance Ministry refused to respond to inquiries by JTA.

In December, Defense Minister Ehud Barak in an interview with Army Radio said the key element to preventing casualties is for Israelis to stay home.

The advice might apply not just within Israel but to Israelis and Jews overseas. Among the responses considered likely by Iran are terrorist attacks like the bombings that destroyed the Israeli Embassy in Buenos Aires in 1992 and the AMIA Jewish community center in the Argentina capital in 1994. The attacks combined to kill 114 people.

But Efraim Kam, deputy head of the  Institute for National Security Studies, said Iran’s terrorist capability is not as effective today because of its weakened terrorist infrastructure and global efforts against terrorism. As evidence, he pointed to the recent botched attacks on Israeli targets in Georgia, India and Thailand, for which Israel has fingered Iran.

Israela Oron, a member of Israel’s National Security Council and a retired brigadier general, said the lack of public discussion of homeland security is part and parcel of the country’s lack of preparedness.

“How can we decide if 500 people is too many or ‘acceptable’ if these numbers are not discussed in the context of other possible alternatives? There is no discussion of the price that the home front will have to pay, and whether the homefront can tolerate it,” said Oron, who is also a member of the Inclusive Security Council, an organization that aims to bring more women into national security decision-making.

“What will it mean if our cities are shut down for months? How will the public respond?  The government should weigh these questions as carefully as they do the military planning.”