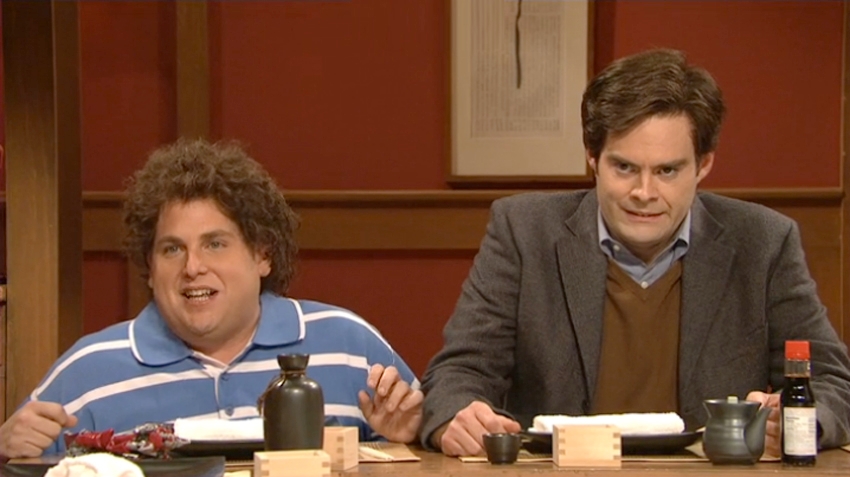 Hill surprised many viewers by showing up with a few extra pounds, making him look like his funny old self again. His monologue featured Tom Hanks, who teased Hill for not winning an Oscar. That was followed by a digital short that involved Hill having a succession of tennis balls shot directly at his crotch (including a special one by John McEnroe).

To the cook: “I love your showmanship, but please be careful with those knives, you’re giving me flashbacks from my bris! I don’t know if I should clap or cover my schmeckel!”

“Based on what I read on my father’s JDate profile, his hobbies include ‘stretching the truth.’ ”

On taking his dad’s Viagra: “I was just looking for a Flintstones chewable to help me get through a tough Wednesday and I took a Schwartz pill by accident … Let’s just say it made for an interesting day at Hebrew school.”

The French indie pop duo The Shoes have a new song called “Time to Dance,” an electronic, disco-punky and upbeat track. This probably wouldn’t matter much to our readers if it weren’t for the fact that the music video features Jake Gyllenhaal going on a crazy killing spree.

How crazy? Well, in the course of the eight-minute video, an apparently drugged-out Gyllenhaal slaughters as many hipster-looking folks as possible — some indoors, some outdoors, some at the club. Between kills he performs everyday tasks like shaving, working out and eating.

Director Daniel Wolfe told Spinner, “Jake Gyllenhaal and I had been talking about working together on something, and I got sent ‘Time To Dance’ by The Shoes, who are my favorite band, so I wanted to bring Jake in on that. I pitched the idea to him, and he liked it, which was great.”

Now it all makes sense.

James Franco’s experimental horror film “Francophrenia” is finally going to be screened in the U.S. — in April at the TriBeCa Film Festival in New York.

The film, a collaboration with filmmaker Ian Olds, was shot on the set of “General Hospital” when Franco was portraying a serial killer in the long-running soap. The mini-thriller is comprised of TV footage of Franco’s appearances on the show and footage of the actor wandering backstage talking to cast members and crew. Franco plays himself and the character he portrays, and he narrates.

The film debuted at the Rotterdam Film Festival in January.

Radcliffe on OCD, being a celeb

In a recent interview with the British tabloid The Sun, ex-wizard Daniel Radcliffe openly talked about suffering from obsessive compulsive disorder as a kid. Radcliffe developed the condition at the age of 5 and said that at its worst, it would take him five minutes to turn off a light.

“I had to repeat every sentence I said under my breath,” he said. “I would encourage everyone to undergo therapy. It doesn’t mean you’re insane or weak. I haven’t had it this year so far and I’m missing it.”

In addition, Radcliffe talked to the French magazine Be about how he views being a celebrity.

“The idea is to never believe that you are special just because you are famous,” he said, adding that “Otherwise, the day when celebrity vanishes, it’s the best way to end up in a reality TV show!”

Radcliffe said his problems had nothing to do with media pressure.

“I have unfortunately got an addictive personality,” he said, “and alcohol is the most acceptable addiction for most people.”