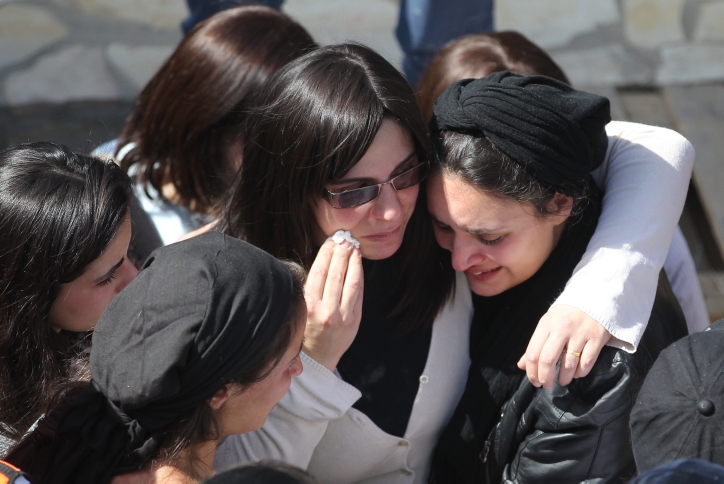 The wife of Rabbi Jonathan Sandler, center, and mother of their two young sons Arieh and Gabriel mourns at the funeral of her family in Jerusalem, March 21, 2012 (Nati Shohat/FLASH90)
Advertisement 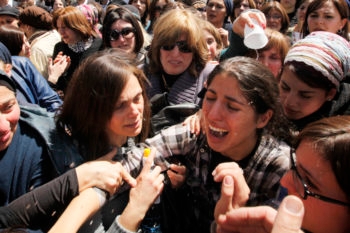 The sister of Toulouse shooting victim Miriam Monsonego breaks down at the joint funeral for the four victims in Jerusalem, March 21, 2012. (Miriam Alster/FLASH90) 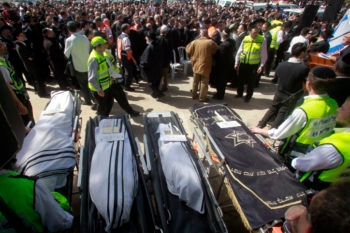 The bodies of the victims of Monday’s shooting at a Jewish school in Toulouse, France, during their joint funeral service in Jerusalem, March 21, 2012. (Uri Lenz/FLASH90 )

JERUSALEM (JTA) — Thousands gathered in Jerusalem for the funeral of the four victims of the attack on a Jewish school in Toulouse, France.

Rabbi Jonathan Sandler, 30, his two young sons Gabriel and Arieh, and Myriam Monsonego, the 7-year-old daughter of the Ozar Hatorah school’s headmaster, were buried Wednesday morning as police in Toulouse remained in a standoff with the chief suspect in the attack.

The school reopened Wednesday for the first time since Monday’s attack, in which a man riding a motorbike opened fire outside the school where students were waiting to enter the building at the start of the school day.

“Your grief, your pain is ours, too,” French Foreign Minister Alain Juppe said at the funeral. “All of France is in shock.” Juppe said that France would work to fight against anti-Semitism.

“In Toulouse and Jerusalem, in New York and Buenos Aires, Jews of all factions stand with us with deep pain in their hearts and tears in their eyes,” he said. “Again we stand before small, silent bodies, before small graves.”

Prior to the funeral, the parents of Myriam Monsonego and the pregnant wife and mother of the Sandlers arrived at a Jerusalem funeral home to say their final goodbyes to their loved ones, whose bodies arrived in Israel following a memorial service at Charles de Gaulle Airport in Paris, with President Nicolas Sarkozy and Prime Minister Francois Fillon in attendance, Haaretz reported.

In a meeting before the funeral, Israeli President Shimon Peres thanked Juppe in French for his actions in the wake of the attack, calling them a “special expression of the deep ties between France and Israel.”

“Your arrival and the actions of President Sarkozy in light of these harsh events prove that Israel and France are on the same front both in seeking peace and in the total war against terrorism,” Peres said. “The people in Israel and in the Diaspora communities were moved by the expressions of grief and consolation that have been voiced in France and by the government’s actions. Children are more precious than anything, and everything must be done to ensure their peace, in the future as well.”

“This was an abhorrent and unacceptable murder that can hardly be described,” Juppe said. “I came to express the solidarity of the French people with the people of Israel, which felt that its children were murdered. The blood of our two peoples was spilled in this murder.”