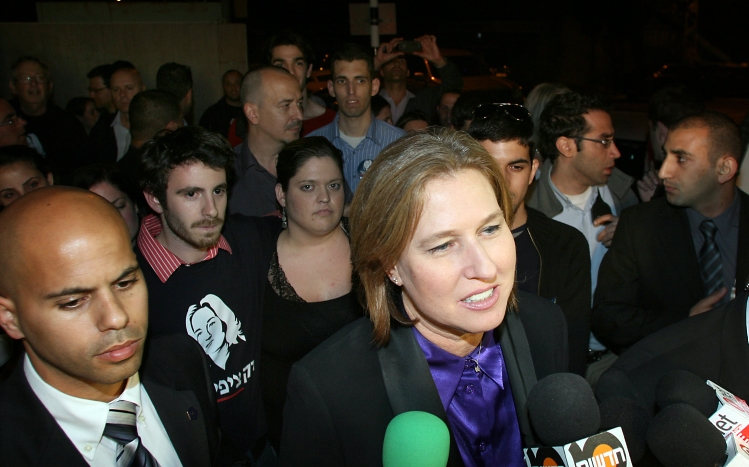 JERUSALEM (JTA) — Tzipi Livni’s resounding fall in the leadership vote for Kadima, Israel’s largest political party, was as dramatic as her rise to political power.

Ahead of last week’s vote, most polls were predicting that Livni would defeat Shaul Mofaz, a former Israel Defense Forces chief of staff. Most also showed that Kadima headed by Livni would fare at least slightly better in next year’s general elections than it would with Mofaz at the helm. And just last month Newsweek and The Daily Beast counted Livni as one of the 150 Women Who Shake the World and called her one of the most powerful women in the country.

Yet on March 27, in a low turnout of 40 percent of Kadima’s 95,000 members, Mofaz trounced Livni, taking 61.7 percent of votes. Now Livni’s political future is unclear.

This week, Livni told a reporter camped outside her Tel Aviv home that “I am on vacation, sweetheart.” And she was conspicuously absent from Kadima’s first faction meeting since the leadership primary.

Livni’s rapid climb to power — comparable to the political careers of Prime Minister Benjamin Netanyahu and Defense Minister Ehud Barak — was remarkable. Just two years after leaving her commercial law practice to become a Knesset member in the Likud Party, Livni was given a ministerial portfolio. By 2006 as foreign minister, she was second in command of Kadima, Israel’s ruling party, and in the 2009 general election — just a decade after entering politics — Livni led Kadima to garner 28 Knesset seats, one seat more than the second-largest party, Netanyahu’s Likud.

Livni, who admitted in an interview with Yediot Achronot to being a Mossad agent in Paris in the early 1980s, grew up in an ardently right-wing household. Her father and mother were members of the prestate Irgun, a paramilitary organization affiliated with Ze’ev Jabotinsky’s Revisionist Zionist movement that was the ideological precursor to today’s Likud.

With some other leading members of Likud, she came to believe that Israel had to cede control over areas populated by Palestinians in order to remain a Jewish state. Livni joined Prime Minister Ariel Sharon when he left the Likud to form Kadima in November 2005 in the wake of his Gaza disengagement.

She advanced within the party’s leadership as a result of a series of upheavals that included Sharon’s paralyzing stroke in January 2005, just months before the March 2006 general elections, and Prime Minister Ehud Olmert’s July 2008 announcement that he would resign in the wake of corruption allegations.

At a time when Olmert’s ordeal was making headlines, along with the rape charges against President Moshe Katsav and a corruption case involving a finance minister, it was the Israeli public’s perception of Livni as honest and clean — a Time profile of her in 2010 was titled “Israel’s Mrs. Clean” — that boosted her status.

“Under the immediate circumstances, Livni’s was an alarming anointment, effectively implemented by a well-known advertising and PR firm that had more to do with appearances than with substance,” said Amotz Asa-El, a Hartman Institute fellow and a former executive editor of The Jerusalem Post.

“They played up her Mrs. Clean image, emphasized her femininity, changed her hairdo and dressed her in elegant business suits. But she was a shallow politician who could not seriously debate anything,” he said. “She was no match for Bibi.”

The beginning of Livni’s downfall was her inability after the 2009 general elections to form a coalition, despite winning a plurality of the votes. A bloc of several religious and right-wing parties made it much easier for Netanyahu to form a coalition.

Meanwhile, left-wing parties Labor and Meretz, which had lost votes to Kadima, declined to support Livni because they were concerned she would form a coalition with Avigdor Liberman’s Yisrael Beiteinu. Negotiations for a rotation government that included Likud and Kadima fell through in part due to Livni’s opposition to the idea. Ironically, if the deal had been finalized, Livni would have started her stint as prime minister this week. Instead, Kadima remained in the opposition.

Kadima, a party originally built around the dominating persona of Sharon and political pragmatism, lacked both a clear agenda and an ideological tradition, which made it particularly ill equipped to weather a long period of exile from the governing coalition.

“Many in the party simply refused to reconcile themselves to remaining in the opposition,” said Nachman Shai, a Kadima Knesset member and Livni supporter. “They wanted someone who they thought would give them more of a chance to return to the coalition.”

Livni also managed to make many enemies within Kadima. In one incident caught on camera, Livni repeatedly interrupted Mofaz as he attempted to present his diplomatic plan for solving the Israeli-Palestinian conflict to Kadima lawmakers in November 2009.

“Shaul had worked hard on that plan, going into great details on all the key issues from borders and security arrangement to Jerusalem and meeting with [Palestinian Authority Prime Minister] Salam Fayyad,” said Ronit Tirosh, a Kadima Knesset member aligned with Mofaz.

Before the primaries, fewer than half of Kadima’s Knesset members were openly aligned with Livni.

Tirosh and others within Kadima also attacked Livni for failing to capitalize on last summer’s socioeconomic protests against the high cost of living.

For Asa-El this was proof of Livni’s inability to formulate a coherent domestic policy.

“You can criticize Bibi for his ideas about economics, but he presented a program with a clear worldview,” he said. “Livni utterly failed to join the protests, let alone lead them or even articulate any sort of domestic policy.”

However, Moshe Debby, the head of a public relations firm that advised Livni on strategy, insists that Livni remained more popular than Mofaz until the end, as evidenced by the polls. Rather it was Mofaz’s behind-the-scenes deal-making among Kadima members that clinched him the leadership vote.

“Tzipi was a woman of ideology and values who was concerned primarily with the betterment of the nation,” Debby said. “She did not go to bar mitzvahs and weddings, she did not call people on their birthdays, she did not engage in the internal politics of back scratching. And that’s why she lost.”