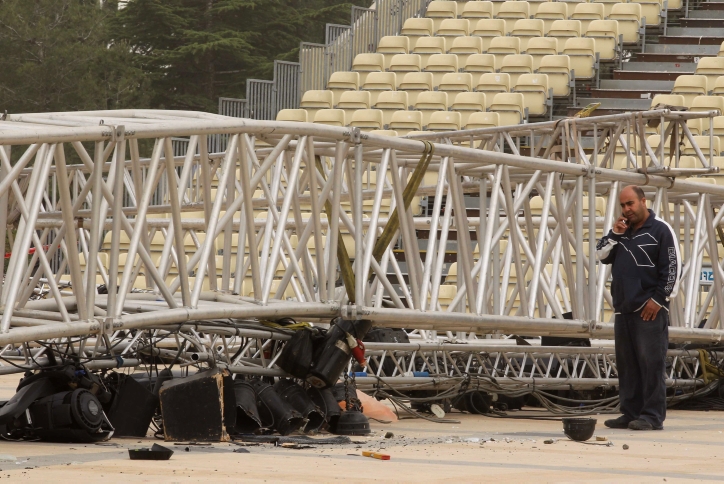 A man standing next to the lighting structure that collapsed at Mount Herzl during the preparations for next week's Israel Independence Day ceremony, killing a young woman and injuring several people, April 18, 2012. (Nati Shohat/FLASH90)
Advertisement

JERUSALEM (JTA) — A female Israeli soldier was killed and seven others were injured after a stage collapsed on Mount Herzl in Jerusalem.

The collapse came Wednesday afternoon during a rehearsal for the national Fallen Soldiers and Victims of Terrorism Remembrance Day ceremony to be held next week, according to reports. It was very windy at the time of the collapse.

A bank of heavy lights crashed to the stage, according to reports. The accident occured shortly after a large group of soldiers participating in the ceremony left the scene.

The soldier killed was listed in reports as being 20 or in her 20s. Two of the injured are reported to be in moderate condition.

Police and rescue workers searched the scene for more injured, according to The Jerusalem Post. The rest of the stage installation is being checked for safety.