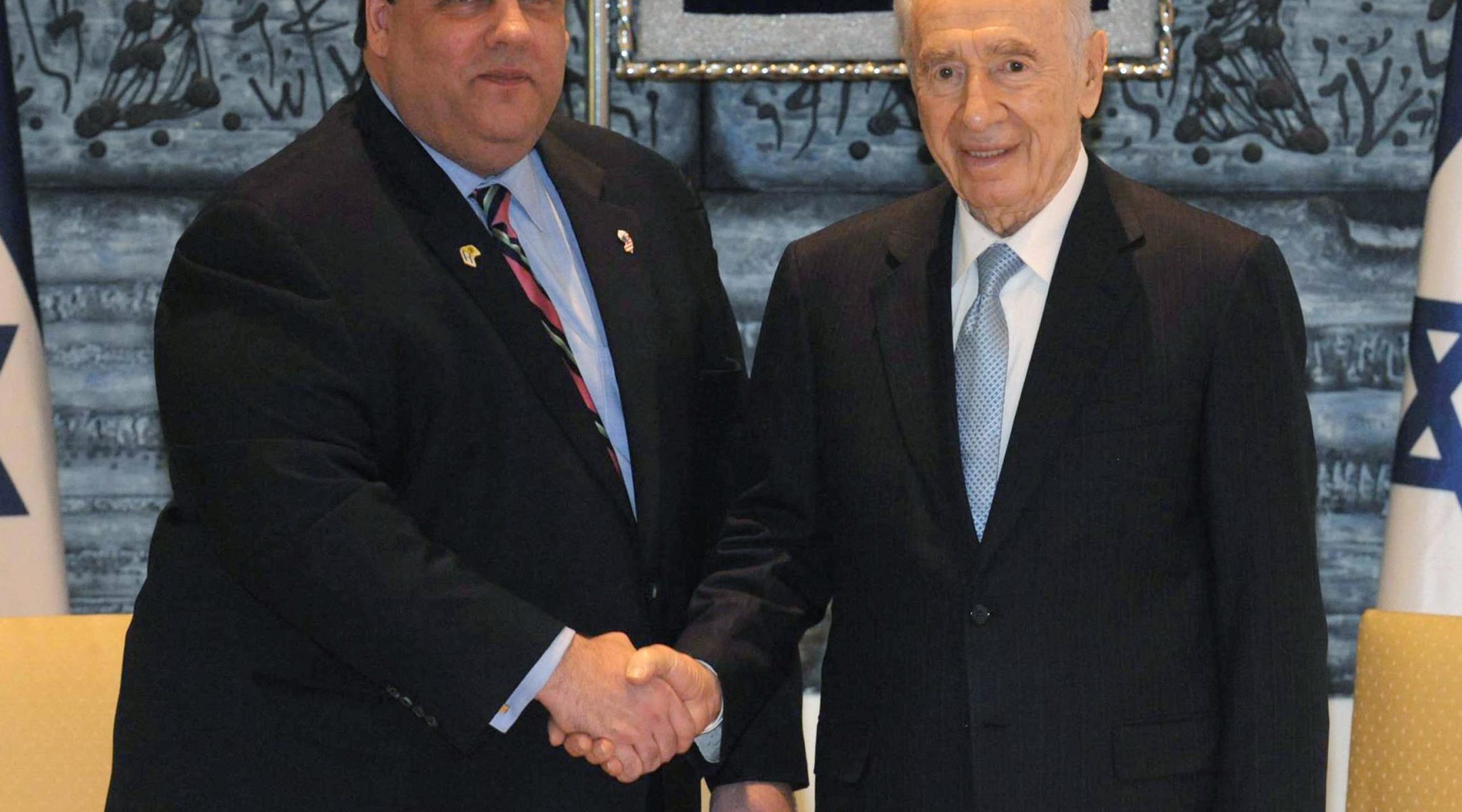 (JTA) — New Jersey Gov. Chris Christie, fresh off his first trip to Israel, has the attention of some key Jewish Republicans.

“There’s no question of this man’s passion and devotion to Israel,” Zeidman said. “I am certainly hopeful that he will take on a much more major role.”

Christie said he was looking to “expand his portfolio” as an emerging Republican national leader when he visited Israel earlier this month. The first-term governor billed the weeklong trip, called “Jersey to Jerusalem,” as an “economic growth, diplomacy [and] observance” mission. Christie met with leaders of several Israeli companies, but much of the trip focused on Israeli defense and policy.

Several influential Republicans had urged Christie to seek the party’s presidential nomination this year, but he demurred and has been a strong supporter of Romney. A recent Quinnipac poll showed Christie leading the pack of potential Romney running mates, and Republican leaders have mentioned him as a possible vice-presidential nominee.

Although Christie acknowledged his growing influence in his party, he denied any presidential ambitions and said he would finish his term as governor.

“I have an obligation to this state. I signed up for a four-year gig,” Christie said at a news conference upon returning from the Middle East, where he also visited Jordan. But he added, “I am a voice in my party nationally. As I grow, I need to expand my portfolio in that position. It is best to be prepared for the roles you are asked to take on in life.”

Israel and New Jersey have enjoyed a close relationship for decades. In 1988, then-Gov. Tom Kean signed a “partner-state agreement” with Israel. New Jersey also has a large Jewish population, and several of its governors have traveled to Israel, including Christie’s immediate predecessor, Democrat Jon Corzine.

“On all of those trips, the governor met with the prime minister of Israel,” said Alan Steinberg, who coordinated Christine Todd Whitman’s 1996 and 1998 trips to Israel when she was governor. “Every governor of New Jersey takes a position on national and international issues, particularly because New Jersey is very involved in international trade. The fact that [Christie] took a position on these issues does not signal a future run for the presidency.”

Zeidman said the trip is a “great learning experience” for Christie.

“The meetings are a tremendous advantage to him in dealing with the hottest part of the world,” he said.

At the news conference, Christie took a hawkish line on the Israeli-Palestinian conflict. He cautioned against Israeli withdrawal from eastern Jerusalem, explaining that his tour of the Old City of Jerusalem “further reinforced my view that Jerusalem has to stay under Israeli control.”

The governor also said the most “eye-opening” part of his trip was a helicopter tour with Israeli military officials over part of the West Bank. George W. Bush, at the time governor of Texas, expressed a similar sentiment after taking a similar helicopter tour in 1998 with then-Israeli Foreign Minister Ariel Sharon.

“Everyone who thinks they have an opinion that’s worth something on the Palestinian issue should take that tour,” Christie said. The helicopter ride took “three minutes from West Bank settlements to the Mediterranean. A missile goes much faster than a helicopter.”

Christie, whose trip included a meeting Benjamin Netanyahu, praised the Israeli prime minister’s leadership. Israeli officials called the dinner that Netanyahu hosted for Christie unusual given the two had not previously met.

“Let me present it this way: It’s not routine. There is a belief that the governor is an up-and-coming national leader,” Netanyahu spokeman Mark Regev told The Record newspaper in New Jersey.

For his part, Christie said, “The prime minister is an articulate spokesman and advocate for how peace negotiations should be conducted.”

The governor also met with Israeli President Shimon Peres, 89, which Christie said felt “like walking into a history book,” as well as Shai Agassi, the founder of Better Place, the electric car startup, and representatives of Teva Pharmaceuticals. Christie hopes that Teva will open a New Jersey location in the near future.

Christie did not meet with any Palestinian Authority leaders.

After leaving Israel, the Christie family spent a weekend with King Abdullah of Jordan and his family. Christie first met Abdullah at a conference in Iowa in 2010.