Are Netanyahu and Barak bluffing on Iran, or are they already committed to war? 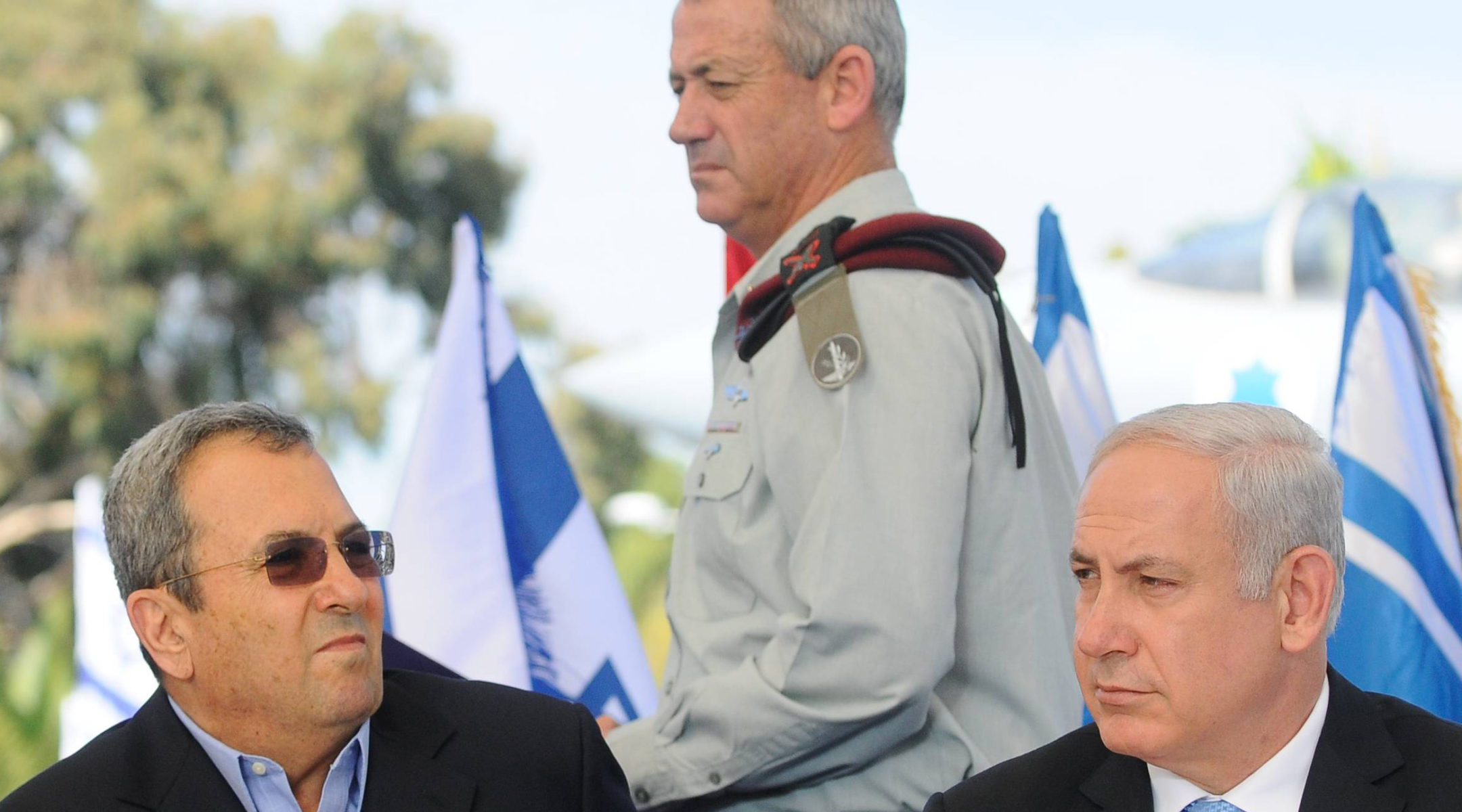 WASHINGTON (JTA) — Has Israel’s game of chicken with Iran jumped the shark?

Israeli Prime Minister Benjamin Netanyahu and Defense Minister Ehud Barak in recent months have been more explicit than ever about the likelihood of an Israeli strike on Iran to keep it from obtaining nuclear weapons capability.

A number of current and former top military officials are now suggesting that the duo has gone too far, turning what was meant to be a calculated bluff into a commitment to a strike that could accelerate Iran’s nuclear program and engulf the region in war.

Are Barak and Netanyahu merely posturing, or are they really intent on waging war?

Last week, Barak marked Israeli Independence Day with a speech dismissing the likelihood that Iran will succumb to diplomatic pressure to end its suspected nuclear weapons program. He said that while the likely success of an Israeli military strike was not “marvelous,” it was preferable to allowing Iran to press forward.

A week earlier, Netanyahu had made a searing Holocaust Remembrance Day speech in which he likened Iran to Nazi Germany and stressed his commitment to Israel’s self-defense.

Such posturing is not novel: Israel, like other parties to longstanding conflicts, for years has used brinksmanship to ward off actual warfare. Statements from its military ending with the threat “we will know how to respond” are routine.

The target of such pronouncements is not only Iran but also the international community, said Steve Rosen, a former foreign policy director for the American Israel Public Affairs Committee who maintains close ties with some of Netanyahu’s top advisers. Western leaders are likelier to act to isolate Iran when they are faced with the real prospect of Israel going it alone, he said.

“It’s no secret that American and European interest starts with Israel doing something,” Rosen said.

Eitan Barak, a Hebrew University expert on international relations (and no relation to the defense minister), described the tactic as one of brinksmanship.

“There is a possibility that Barak is saying in a closed forum, ‘The military option is not on the table, but let’s say it in public in order to keep this position of brinksmanship,’ ” the professor said.

The problem might be that the “closed forum” now encompasses only Barak and Netanyahu, he said.

“If this is a diplomatic game, the game should be stopped when you discuss this with people like the Mossad and the Shabak,” Eitan Barak said, using the Israeli acronym for the Shin Bet internal security service. “But it could be that Netanyahu and Barak decided it’s such an important issue, they should make themselves really warlike even in the Cabinet, so that there will be no doubt in eyes of foreigners and diplomats that they are ready to launch a military attack.”

On April 27, the day after Barak spoke, Yuval Diskin, the former head of the Shin Bet, said he believed that Barak and Netanyahu are serious in contemplating an attack on Iran — and that they are driving Israel into a strike that likely would have severe consequences.

Diskin, speaking to a town hall-type meeting in Kfar Saba, the central Israeli town where he lives, continued: “I do not have confidence in the current leadership of the State of Israel that could bring us into a war with Iran or into a regional war.”

Diskin’s attack was the bluntest so far on Barak and Netanyahu, but he is not alone.

Meir Dagan, the former chief of the Mossad, Israel’s intelligence service, last year delivered similar warnings, and the current military chief of staff, Lt. Gen. Benny Gantz, last week said he believed the Iranian leadership was rational and that the country did not pose an existential threat to Israel.

Rosen noted that many of the critics now speaking were either disgruntled or may entertain political ambitions.

“A lot of them feel snubbed,” he said. “There’s a cadre of security professionals who feel that their views were not adequately taken into account.”

Dagan wanted to stay on as Mossad chief and Diskin had ambitions of replacing him. Ehud Olmert, a former prime minister who over the weekend joined the chorus criticizing Netanyahu, is a longtime rival of Netanyahu’s who is facing a corruption trial in Israel that could bury his comeback prospects.

David Makovsky, a top analyst at the Washington Institute for Near East Policy, said it was not unusual for the military establishment to exercise greater caution than the political establishment, noting such tensions surfaced in 1981, before Israel took out the Osirak nuclear reactor in Iraq.

“This will be decided by the political echelon, and the security establishment will weigh in, but they won’t necessarily be decisive,” Makovsky said.

None of the officials criticizing Barak and Netanyahu has broken with the Israeli consensus that an Iranian bomb is something to be prevented and not accommodated or “contained.”

The issue concerning the Israeli defense establishment, according to a number of Israeli experts, is whether Barak and Netanyahu have lost site of the utility of threats to strike Iran — to rally the international community toward stopping Iran from acquiring the bomb.

“The threat of an attack remains a tactical measure which has achieved results,” said Shlomo Aronson, a political scientist who was the Schusterman visiting professor of Israel studies at the University of Arizona from 2007 to 2009. “It should not be pursued in practical terms.”

Aronson said that until now, the tactic has helped focus the international community, led by the Obama administration, on isolating Iran through sanctions and diplomatic pressure.

The concern now permeating the Israeli defense establishment is that Barak and Netanyahu are no longer bluffing, said Avraham Sela, a research fellow of the Harry S. Truman Institute for the Advancement of Peace who served as an intelligence officer under Barak when he was military chief of staff in the 1990s.

He noted that in the ‘70s his former commander and Netanyahu were both members of the General Commando Squad, and had preserved from that training the tendency to play one’s cards close to one’s vest.

Barak “remains that commando officer, which means I don’t know to what extent he is calculating and to what extent he is willing to take the risk for such an operation — in the best case a temporary achievement that will maybe give Israel some time and which could eventually instigate Iran even more to get this weapon, even if they haven’t until now sought it,” Sela said.

Sela noted that during his term as chief of staff, during the 1991 Gulf War, Barak had to credibly threaten to strike Iraqi targets in order to get the U.S.-led alliance to take out Iraqi batteries launching missiles. The George H. W. Bush administration feared that an Israeli strike would shatter the coalition of western and Arab states it had cobbled together.

Barak said recently that Israel would suffer no more than 500 deaths in the event of a war following a preemptive strike on Iran.

Gabriel Sheffer, a professor of political science at the Hebrew University who also served under Barak in the military, said the prediction was greeted with much skepticism and derision by the Israeli media and defense establishment.

“It is pretty sure that the people who will be killed, that the number will be much greater,” he said. “I think that this was part of his attempt to persuade everybody Israel should attack Iran.”

Makovksy said Barak and Netanyahu must convey seriousness of intent in order to have the West pay attention.

“Israel is the only country being threatened with its existence, so it has to take it seriously because they’re not a superpower and their window for action closes early,” he said. “They want to get America’s attention, but it does not mean they’re necessarily trigger-happy.”