For centennial of Agnon’s first novella, a search for books and roots 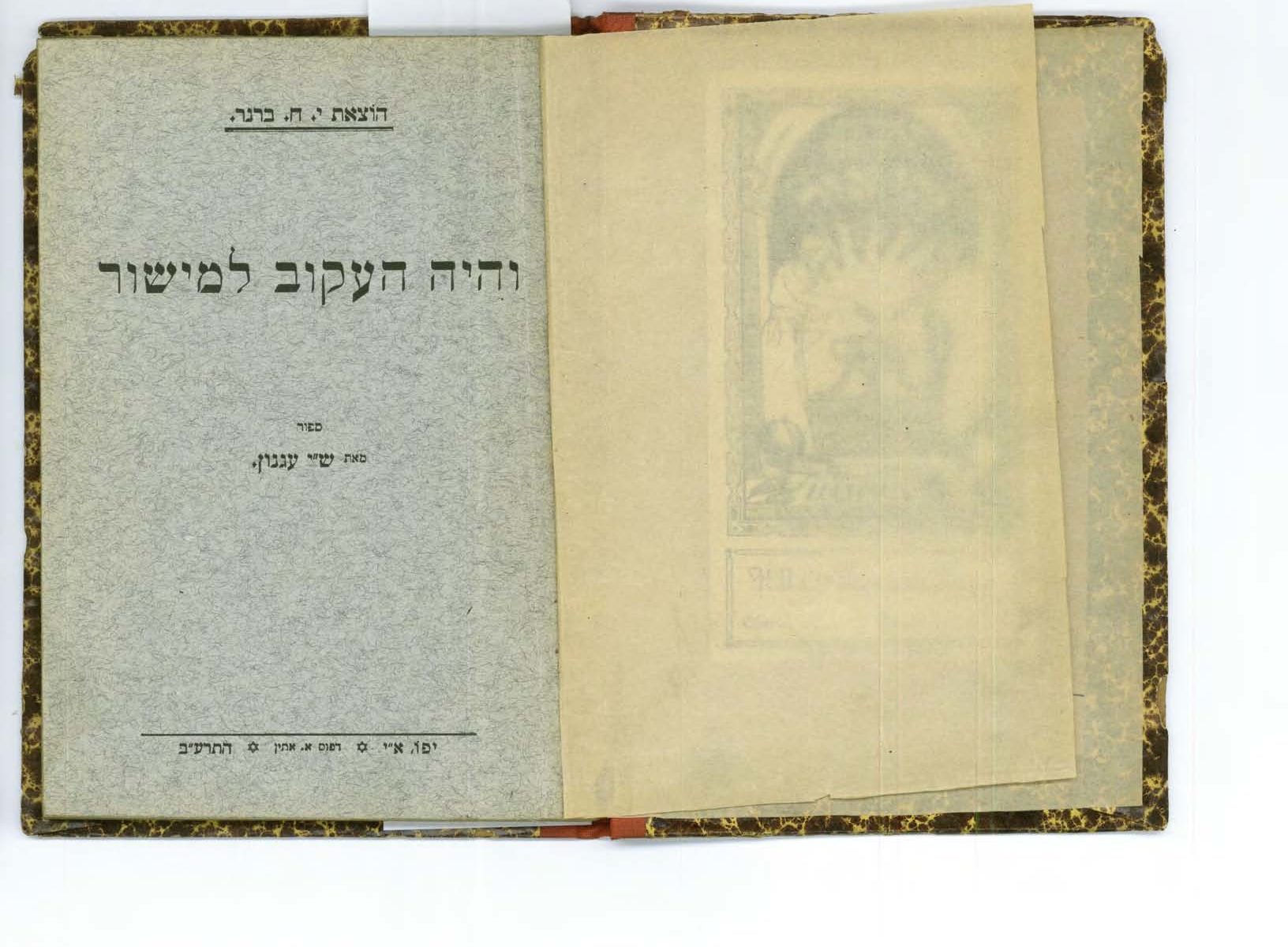 The opening pages of a 1912 copy of S.Y. Agnon's first novella, "And the Crooked Shall Be Made Straight." (Photo courtesy HUC)
Advertisement

S.Y. Agnon, the only Israeli author who has ever won the Nobel Prize for Literature, published his first novella a century ago. (Courtesy Agnon House)

NEW YORK (JTA) — The works of Shmuel Yosef Agnon, Israel’s only winner of the Nobel Prize for Literature, are on the shelves of nearly every Israeli bookstore. Readers seeking S.Y. Agnon’s writing can access several editions of his novels, novellas and short stories.

Except one: the first edition of his first book.

This year, on the 100th anniversary of that book’s publication, an Israeli organization is searching for the first copies of Agnon’s first novella, “And the Crooked Shall Be Made Straight.”

An unusual tale lies behind the book’s first printing: Yosef Haim Brenner, who in 1912 was a more prominent Hebrew author than Agnon, liked the latter’s writing and sold a pair of suspenders to fund the novella’s publication. At the time, Agnon had published popular short stories but no longer works.

Brenner printed 50 editions of the novella in Jerusalem, sending 30 to a small community of Hebrew speakers in New York who had emigrated from Agnon’s native Galicia, an area that overlaps the border of present-day Poland and Ukraine.

A century later, just two of those 50 editions have been located: one in Israel’s national library and the other in the Agnon family’s private collection.

Agnon House, the group that maintains the author’s Jerusalem home as a museum, is on a mission to find others.

Although the writer, who died in 1970, lived in Jerusalem, “And the Crooked Shall Be Made Straight” is among his few works that were printed there.

“We saw a lot of symbolism in this,” said Eilat Liber, director of Agnon House. “He wanted to live in Jerusalem. In his [1966] Nobel Prize speech, he said he felt ‘as one who was born in Jerusalem,’ ” even though he was born in Galicia.

The hunt has taken Liber far from Agnon’s beloved city, with Agnon House searching the United States for books. The search has yielded nothing — not even a few leads, although Liber hopes to find copies in American libraries and private collections.

During a cursory search, JTA was able to locate copies of a later 1912 printing of the book from Jaffa at Brandeis and Hebrew universities — but not a first edition.

The search is one of a few efforts this year to celebrate “And the Crooked Shall Be Made Straight,” which follows a childless couple through tragedy in Agnon’s native town of Buczacz, in present-day Ukraine. The novella’s first English translation is expected to be completed by the end of this year.

Agnon’s writing in the novella and in later works is laden with allusions to the Talmud, Midrash, Bible and Chasidic tales.

Using the book’s first edition, Kramer said, will allow him to translate with greater accuracy and better knowledge of Agnon’s intent.

“When I started translating the book, it was clear that it was a kind of mission impossible,” said Kramer, a professor at Bar-Ilan University in Tel Aviv. “On the one hand, I wanted to create a text that would render the story in an interesting and accessible way, but on the other hand, reading Agnon in Hebrew demands the kind of cultural literacy that is untranslatable.”

To stay faithful to Agnon’s textual references, Kramer is using the King James Bible and legalistic, Talmudic language. He believes the story, despite the esoteric nature of Agnon’s writing, is relevant to American Jews.

“It reminds me of [Nathaniel] Hawthorne’s ‘Scarlet Letter,’ ” Kramer said. “What Hawthorne did for Puritan New England, Agnon did for 19th-century Jewish life in Galicia. It’s a story about the constancy of life that will attract all readers.”

The window Agnon provides into the world of Eastern European Jewry also has begun to attract a new generation of Israeli readers to the author, says Liber.

“For many years, Israelis didn’t want to know about Jewish life in the exile, and now there’s more interest in Yiddish and in the generation of Agnon,” Liber said. “Israelis are going to Poland and Ukraine not because of the Holocaust but to see the synagogues and shtetls.”

In another aspect of the celebration, Liber plans to lead a trip to Galicia to explore Agnon’s roots.

That world may seem alien to today’s readers, but Alan Mintz, an Agnon expert and translator, said that “And the Crooked” was revolutionary to Hebrew readers a century ago, when most books about Eastern Europe satirized life there.

“He took a chance writing his first longer work going back to Eastern Europe and showing that this is a world in which serious ethical and human dilemmas could be portrayed,” said Mintz, a professor at the Jewish Theological Seminary in New York.

While the translation’s publisher, Matthew Miller, thinks Jewish readers will enjoy the novella, he expects that many copies will be bought for college classes on Hebrew literature.

Miller’s Toby Press has published some of Agnon’s more well-known works, such as “To This Day” and “A Simple Story.”

Lamenting a decline in Jewish literacy among American Jews most likely to read novels, Miller hopes that this book will introduce readers to the wide variety of Jewish texts.

“It would be nice if a modern American Jewish reader would discover that Jewish literacy,” Miller said. “Maybe Agnon will be a spur to regain it.”