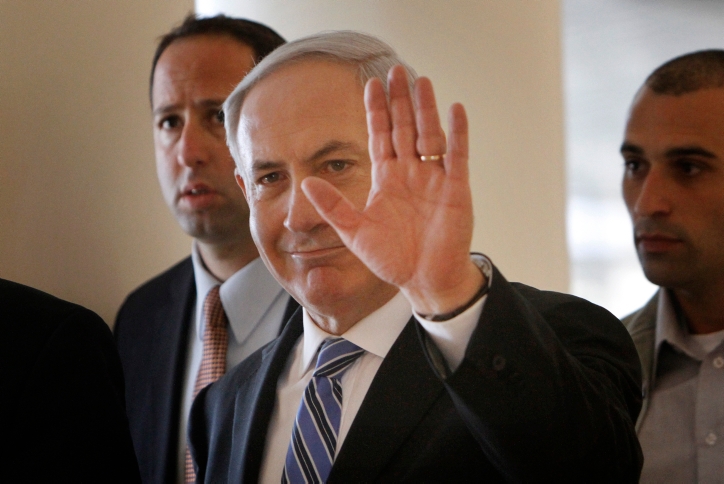 Israeli Prime Minister Benjamin Netanyahu, the head of the Likud Party, arrives at a party meeting in the Israeli Knesset, May 7, 2012. (Miriam Alster/FLASH90)
Advertisement

JERUSALEM (JTA) — With the Sept. 4 date all but officially set as the day for early elections for Israel’s 19th Knesset, the question now is which political parties are poised to gain and which stand to lose.

With four months remaining before the election, incumbent Prime Minister Benjamin Netanyahu appears to have no real challengers. Numerous opinion polls show the Likud Party, which Netanyahu heads, gaining strength to pick up 30 or 31 of the 120 Knesset seats. Likud currently has 27 seats.

This might explain the prime minister’s eagerness to cash in on his popularity in early elections, despite the relative stability of his government coalition. Elections had been slated for October 2013.

Polls show that Labor, headed by former journalist Shelly Yachimovitch, is a distant second with 15 to 18 Knesset seats.

At its nadir in January 2011, after Ehud Barak broke away from the party with four other Labor Knesset members, Labor registered single-digit support. Labor currently holds nine seats.

Although the newest survey results reflect Yachimovitch’s success in turning around Labor, there has not been a return to the historic two-party Likud-Labor dominance.

“What we are seeing is a strong Likud and a center-left that is splintered,” said Asher Cohen of Bar-Ilan University’s department of political science.

Kadima, which garnered a plurality of votes in the last elections with 28 Knesset seats, has fallen to fewer than half that number, according to recent polls.

Many voters who had supported Kadima have veered to Labor and the new center-left Yesh Atid (There Is a Future) party headed by media personality Yair Lapid. Recent polls give the new party a dozen Knesset seats.

Netanyahu most likely will lead Israel’s largest party, but he may face another challenge: the shrinking of the right-wing bloc.

A new political party headed by Aryeh Deri, the dovish former head of the haredi Orthodox Sephardic Shas Party, is expected to take away votes from Shas.

“If Deri hurts Shas, which is already weaker than it was in the last elections, there is a possibility that the right-wing bloc of parties will lose its clear majority,” Cohen said.

With center-left parties in his coalition, Netanyahu might find it more difficult to avoid disputes over peace negotiations with the Palestinians or about socioeconomic policy.

Still, while it is unclear whether Netanyahu will have an easy time forming a stable government, there is little doubt at this stage that he will be the one chosen — for the third time — to lead the State of Israel.

“The only chance for an upset is if Bibi gets too confident and makes a stupid mistake,” said Aviv Bushinsky, a former spokesman and chief of staff under Netanayahu. “For instance, in the 1999 elections while meeting and greeting, he made comments that were interpreted as extreme right-wing.”

Netanyahu has since learned his lessons, Bushinsky said, noting that “Everything is calculated.”

Netanyahu’s opponents might attempt to attack him for his policies vis-a-vis a military strike on Iran‘s nuclear program.

Prominent figures such as Meir Dagan, the former head of the Mossad, and Yuval Diskin, former chief of the Shin Bet security agency, have provided fodder for such an assault. Both have publicly questioned Netanyahu’s decision-making abilities and warned against the dangerous ramifications of an Israeli attack.

Cohen, however, says that criticizing Netanyahu for being overly hawkish on Iran might backfire since the Israeli public might perceive it as an attempt to belittle the Iranian threat.

Ephraim Kam, deputy director of the Institute for National Security Studies, argues that the Iranian threat “has nothing to do with politics.” A decision to attack Iran is a purely military issue, he said.

“Therefore, the ability to turn Iran into a campaign issue is highly limited,” Kam said, while acknowledging that the exact timing of such an attack might depend on external matters such as the Israeli and U.S. elections.

Nor is the Palestinian question shaping up to be a central issue in the campaign. Opponents have refrained from placing the blame on Netanyahu’s government for the lack of progress in peace negotiations.

Lapid’s There Is a Future party platform mentions working toward a peace treaty that will create two states for two nations while protecting large settlement blocs. But in a speech at Tel Aviv University in March, Lapid said that the Palestinians were responsible for the failure to reach a breakthrough, not Netanyahu’s government.

Meanwhile, Labor’s Yachimovitch, who like Lapid lacks military experience, has toned down criticism of the government’s role in the stalled peace process and is focusing primarily on socioeconomic issues.

“The Israeli-Palestinian conflict is a nonstarter,” Cohen said. “Numerous polls have shown that a majority of Israelis are pessimistic about peace and believe the Palestinians, not the Likud, are responsible.”

In contrast, socioeconomic policy is likely to be a salient issue in the elections. Leaders of last summer’s grass-roots movements that brought a record number of Israelis onto the streets to protest the cost of living are vowing a repeat performance this summer.

It is unclear, however, whether political parties will succeed in harnessing this electoral potential.

“Last summer I saw Lapid, Yachimovitch and [former Kadima head Tzipi] Livni try to take a leadership role in the demonstrations,” Bushinsky said. “But any attempt to politicize the protests was seen as insincere.”

And with the Israeli economy still robust — GDP growth is high and unemployment rates are low at a time when both Europe and the United States are battling tough economic times — it will be difficult for any of Netanyanu’s opponents to attack him in this arena.

Nor will Netanyahu’s opponents be able to attack on another hot topic: military service for the haredi Orthodox. The Supreme Court ruled in February that the Tal Law, which permits haredi yeshiva students to defer military service indefinitely in order to pursue religious studies, gave the haredi preferential treatment and therefore was illegal.

Netanyahu, aware of the broad opposition to haredim avoiding the draft, refused to cave in to haredi demands. Instead he has supported the gradual drafting of more yeshiva students.

“Other parties might try to appeal to crude populism and demand the immediate drafting of all haredim,” Cohen said. “But Netanyahu’s gradual approach is more realistic and people will understand this.”