Behind the Flaum settlement, a long campaign and a phone call 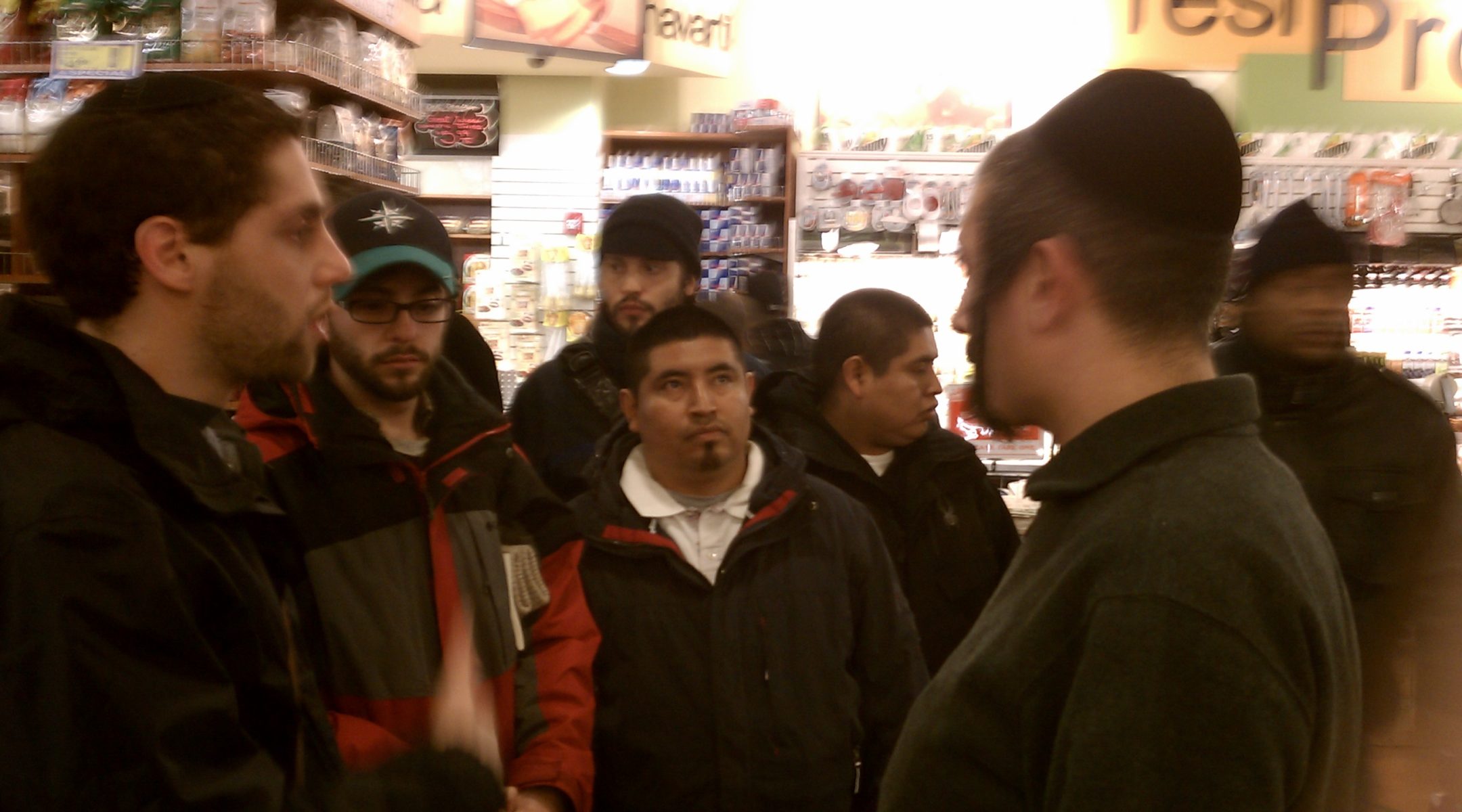 NEW YORK (JTA) — For more than a year, Ari Hart had struggled in his protest against unfair labor practices.

But nothing had worked. Flaum Appetizing Corp., which allegedly fired 16 workers in 2007 after they demanded the legal minimum overtime pay, would not give in to the former employees’ demands.

In 2009, the National Labor Relations Board ordered Flaum’s owner, Moshe Grunhut, to pay the workers. He refused to comply, arguing that the workers were undocumented immigrants. The NLRB did not accept the claim.

Hart, who co-founded the Orthodox social justice group Uri L’Tzedek, had a few brief conversations with Grunhut, but they ended without compromise.

Hart’s fortunes changed with a phone call in February. Grunhut was on the line. The owner had been feeling the pressure, too.

“He expressed to me his feelings,” Hart told JTA. He said he told Grunhut, “We need to resolve this, and you’ve been found guilty. You’re going to have to pay.”

According to Hart, Grunhut was concerned about paying a settlement in one lump sum. Hart said the two worked out a compromise on the phone: Grunhut would pay the workers in multiple installments.

Now, three months later, Flaum and its former employees have agreed on a $577,000 settlement to be paid out in three portions.

“We were able to bridge the gap between Moshe [Grunhut]’s world and the world of the workers,” Hart said of Uri L’Tzedek. “Their needs and their story, and Moshe’s needs and his story.”

The settlement was a success not only for the former Flaum workers, but also for Uri L’Tzedek, which didn’t give up until it was able to negotiate an out-of-court compromise directly with the company it was protesting.

That was in contrast to Uri L’Tzedek’s experience with Agriprocessors, the Iowa meat processing plant it boycotted in 2008. Uri L’Tzedek ended its boycott after a month, when the beleaguered company hired a chief compliance officer. (Agriprocessors’ CEO ultimately was convicted of bank fraud and the bankrupt company was sold.)

The Hart-Grunhut phone call capped an intensive campaign by Uri L’Tzedek in conjunction with a coalition for food workers’ rights, Focus on the Food Chain.

Focus, which had learned of Uri L’Tzedek’s work on labor practices in the kosher world, reached out to the group for assistance. Uri L’Tzedek took the cause to the Jewish community in the fall of 2010.

Hart said Uri L’Tzedek successfully convinced popular supermarkets on the Upper West Side of Manhattan, including Fairway and Barzini, to drop the products.

In total, Uri L’Tzedek and Focus on the Food Chain say they recruited 120 stores to the boycott. Grunhut says the number of boycotting stores was far smaller.

Grunhut tells a different story than the workers and their supporters, but said he is glad to settle.

He said the workers were not fired but rather “walked out” of their jobs voluntarily, and that the issue of overtime pay was a “gray area.”

He also said the NLRB, which in January determined that Grunhut did not have enough evidence to allege that the workers are undocumented, did not provide him sufficient opportunity to confirm their status.

Grunhut said he agreed to settle the dispute primarily because he wants “to do business, not litigating.” He also recognized the value of Hart’s efforts.

“Ari is a nice guy and he was very helpful in reaching this agreement,” Grunhut said.

Hart said that he appreciated the chance to talk to Grunhut.

“It’s a win-win. The workers will get the money, Moshe [Grunhut] will have done the right thing,” Hart said. “It’s a victory for the power of activism.”

Workers like Maria Corona are pleased with the outcome.

“I felt that they understood my concerns,” Corona, 36, said about the Uri L’Tzedek activists. “We finally arrived at justice.”

The group’s Flaum activism is the largest role played by Uri L’Tzedek in a major workers’ rights dispute, according to Hart.

Uri L’Tzedek’s most well-known campaign is its Tav HaYosher, an “ethical seal” certification of fair labor practices for kosher eateries and markets.