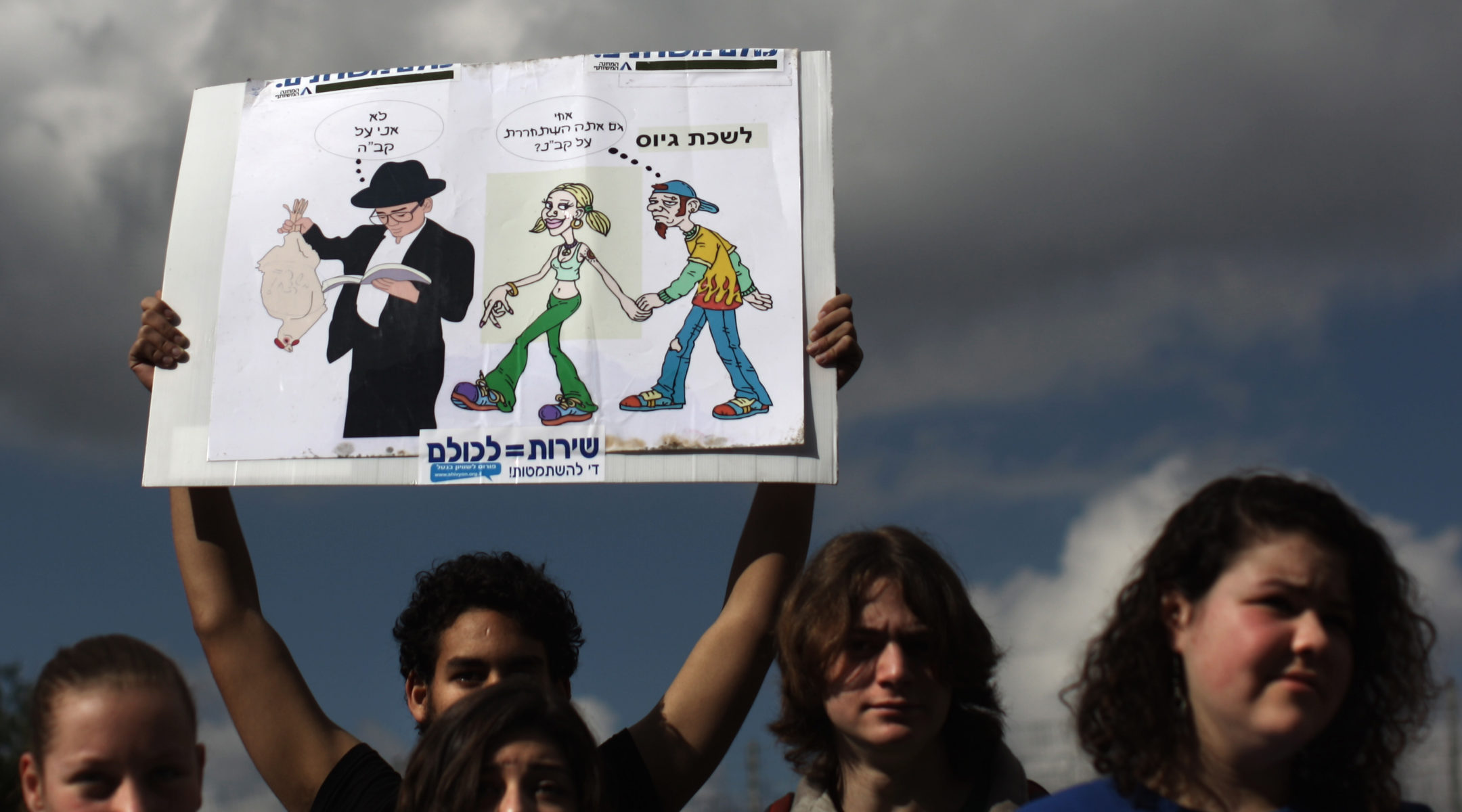 A haredi Orthodox man watching Israeli soldiers at an army ceremony at the Western Wall in Jerusalem, Feb. 22, 2012. (Yonatan Sindel/FLASH90 )

(JTA) – Israel’s new unity government may not alter Jerusalem’s strategy for curbing Iran’s nuclear weapons program or do much to revive the Israeli-Palestinian peace process.

It could, however, dramatically change something at home about which a huge number of Israelis care deeply: haredi Orthodox exemptions from military service.

For years, haredi issues have been something of a third rail in Israeli politics. Nearly every government in recent years has needed the haredi parties to cobble together a governing coalition, rendering haredi entitlement programs like the military exemption politically untouchable.

This long has irritated Israelis who serve in the army and resent that the haredim, by and large, do not serve yet draw all sorts of entitlement payments from the state.

But with Shaul Mofaz’s decision to bring his Kadima party and its 28 seats into the ruling coalition, Prime Minister Benjamin Netanyahu no longer needs the haredi parties to keep his government in power. They could pull out, and it would make no real difference — at least until the elections that are scheduled for October 2013.

How far will Netanyahu go in taking advantage of a historic opportunity to end the special treatment for haredi Israelis?

The question is likely to hinge on political considerations.

Crafting an alternative to the Tal Law is one of the top four priorities set forth by the new government coalition. The other three are passing a comprehensive budget, reforming the structure of government and making progress toward peace. The budget issue is expected to be resolved one way or the other, as budgets generally are, but there is something pie in the sky about the other two priorities.

That leaves the Tal Law alternative as the potential historical legacy of this 18-month alliance between Netanyahu and Mofaz.

On Tuesday, that alternative began to take shape.

The Jerusalem Post reported that under the Mofaz-Netanyahu deal, haredi exemptions from the army would be replaced by a Basic Law — the Israeli equivalent to a constitutional amendment — requiring all citizens to perform military or civilian service.

Last month, Kadima proposed instituting a universal military draft within five years. Under the Kadima plan, all Israelis either would serve in the military or do national service in a variety of fields, among them education, health and domestic security. Those who fail to comply would be barred from receiving any state funding.

The question is whether such a plan, which would radically alter the relationship between the state and its rapidly growing haredi Orthodox population, could survive opposition from Israel’s haredi Orthodox parties.

Netanyahu doesn’t need them to survive in office until the next elections. Indeed, if he were to push through such legislation, it could earn his Likud party much broader support, including from secular and more centrist voters, the next time Israel goes to the polls.

But it could cost Netanyahu in October 2013 if Likud wins the election, Kadima fares poorly and Netanyahu needs the haredi parties to form a coalition.

Those considerations, political analysts say, will mitigate whatever changes are made to haredi exemptions.

Some other factors are at play, too.

For one thing, while in principle most Israelis would like haredim to be subject to the same requirements of service demanded of all other Israelis, in practice the army does not want a sudden flood of tens of thousands of new haredi recruits. The Israel Defense Forces lacks the infrastructure to absorb them, both in numbers and operationally. What would the army do with 10,000 new recruits who are religiously opposed to significant interaction with female instructors?

Also, a dramatic transformation of the relationship between haredim and the state would run up against opposition not only from haredi parties in the Knesset but from haredi citizens. They would see the sudden change as a broadside against their way of life, and mass demonstrations and even riots likely would ensue. It would make the haredi riots against parking lots opening on the Sabbath and a Modern Orthodox girls’ school in Beit Shemesh seem like child’s play.

The reality is that Israel doesn’t want all these haredim in the army .What Israel wants is more haredi men working, paying taxes and integrated into Israeli society.

Under the current system, haredi men must stay in yeshiva until their 30s to keep their military exemption (religious women are granted exemptions from army service upon request). That has helped bankrupt the haredi community and nurture a black market economy in which many haredi men work surreptitiously and do not pay taxes.

Changing the rule would help drive haredim into the workforce and into better-paying jobs. That would help Israel’s tax rolls, reduce haredi dependency on welfare and help integrate haredim into Israeli society.

There is great debate within the haredi community about whether or not to welcome these changes. Some haredim see it as key to the economic and social survival of their community. But other haredi leaders see it as opening up a slipperly slope away from the yeshiva and Jewish observance and toward the dangerous temptations of modern, secular Israel.

Ultimately, whatever change comes to the haredi community is likely to come gradually.

Kadima has proposed exempting 1,000 haredi yeshiva students from the military draft and allowing others to defer military service on a year-by-year basis while they are studying in yeshiva. According to a report in The Jerusalem Post, Likud is likely to propose an alternative that instead would establish a minimum number of haredi participants in national service programs that would increase every year without a cap on those claiming yeshiva-related exemptions from service.

For now, the haredi parties appear to be taking a wait-and-see approach.

“There can’t be a situation in Israel in 2012 where someone who wants to study Torah will not be able to do so,” Yakov Litzman of the United Torah Judaism party told the Post. “But as long as the principle of ‘torato Omunato’ [Torah is one’s work] is preserved, UTJ will remain in the coalition.”