Israel shows off its homeland security technologies to international visitors 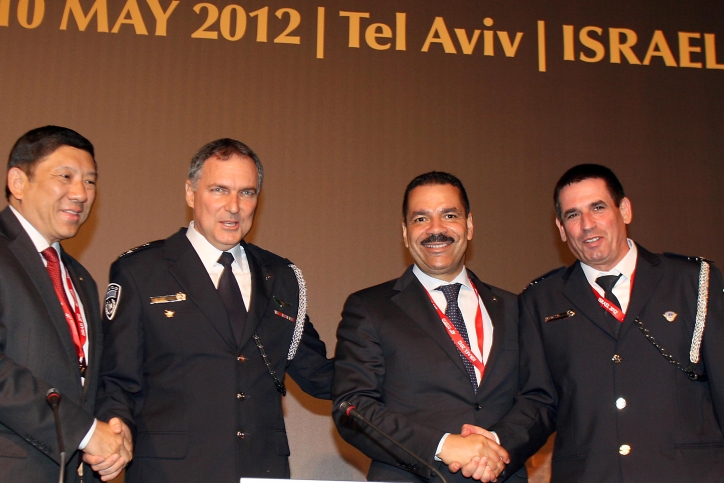 “Israel has been forced to overcome difficult circumstances, including war and terror, in order to survive,” said Alfred Vanderpuije, mayor of the Ghana capital of Accra, following a visit to Elbit Systems, a defense electronics company based in Haifa. “And this has put the Israelis in a unique situation to develop security technologies.”

In the decade following the terror attacks of 9-11, Israeli security exports rose from about $2 billion a year to more than $7 billion, according to data supplied by SIBAT, Israel’s Defense Export and Defense Cooperation Agency. Part of the rise was attributed to the growing international demand for more effective homeland security systems.

At Elbit and other security firms such as Magal Security Systems and Elta Group, a subsidiary of Israel Aerospace Industries, Vanderpuije and the other mayors saw presentations on defense technologies.

Originally developed for the Israel Defense Forces to fight wars and terror, many of the systems are being modified for civilian use, such as securing large cities.

Called the “digital army project,” Elbit’s technology connects all military forces to a single communication network that enables the free transferral of audio and video information.

“From the individual soldier to entire divisions on the land, in the air and on the sea, all our forces are interconnected,” said Dalia Rosen, Elbit’s vice president of corporate communications.

“In the past few years we have begun adopting the tools we have developed and applied on the battlefield for use in a civilian context to create what we call ‘safe cities.’ “

The basic tools that are used to fight terrorism can be used to fight crime and help officials react more efficiently to natural disasters, said Amnon Sofrim, who heads Elta’s homeland security projects.

“Instead of endless patrols, we can use strategically placed cameras or electronic devices connected to a situation room to detect the beginning of a robbery or a fire,” said Sofrim, former chief of the IDF’s intelligence corps. “And this allows us to use a limited amount of security forces or firefighters only where they are really needed.”

There were signs that the meetings between mayors and Israeli security experts might lead to business ties.

“I was very impressed with what I saw and am even thinking about bringing some of these ideas back to Ghana,” Vanderpuije said.

While private Israeli firms were showing the mayors homeland security technologies, a similar show-and-tell was taking place in Tel Aviv at Interpol’s 41st regional conference, the first time Israel has hosted such a conference since it joined the international police organization in October 1949.

Among the Israeli innovations on display were the “skunk,” a liquid with a putrid odor, and the “screamer,” a hand-held device the size of a bullhorn that emits a sound so loud that it can paralyze.

Israeli police developed both as non-lethal means of crowd control in the wake of the October 2000 riots that left 12 Arab Israelis dead.

The Or Commission, an Israeli panel of inquiry set up after the riots, criticized the police for being unprepared and possibly using excessive force to disperse the mobs.

“The skunk and the screamer are more ethical than your average police baton since they don’t cause long-term injuries,”  said Cmdr. Oded Shemla, who heads research and development for the police technology division. “They also happen to be more effective.”

An interactive simulator capable of constructing realistic scenarios, from soccer game riots and violent demonstrations to kidnappings and sniper attacks, also was on display.

“What is unique about our technology is that it is developed by policemen for policemen,” said Shemla, who previously was a police helicopter unit pilot.

Interpol officials were not authorized to comment on Israel’s innovations vis-a-vis other member countries.

Shemla said, however, that senior police officers from Europe were particularly impressed that the Israeli technologies presented at the conference already were in use and had proven to be effective in real-life situations.

“We were not showing them an abstract concept,” he said. “We were showing them things that actually work in the field.”

Jake Rosen, who chairs the American Council for World Jewry that organized and sponsored the international mayors’ conference, said there is room for more security export growth.

“One of the goals of this year’s conference is to break down prejudices [toward Israel] and overcome feelings of hesitation about doing business here,” Rosen said. “We have to be proactive in allowing access to Israeli know-how and in countering anti-Israel sentiment.”

Rosen said that political leaders such as Venezuelan President Hugo Chavez, who has claimed that Israel plans to “terminate” the Palestinian people, are “obstacles to openness” when it comes to economic ties with Israel.

However, Rosen noted that Venezuela should be seen as monolithic. Antonio Ledezma, who beat a pro-Chavez candidate to become mayor of Caracas, attended the conference.

Otto Perez Leal, the mayor of Mixco, Guatemala, and son of Guatemalan President Otto Perez Molina, said his municipality already was implementing security cameras and other technologies developed in Israel.

“Our army and police use this equipment to integrate our forces and improve our ability to respond to natural disasters and other challenges,” Leal said.