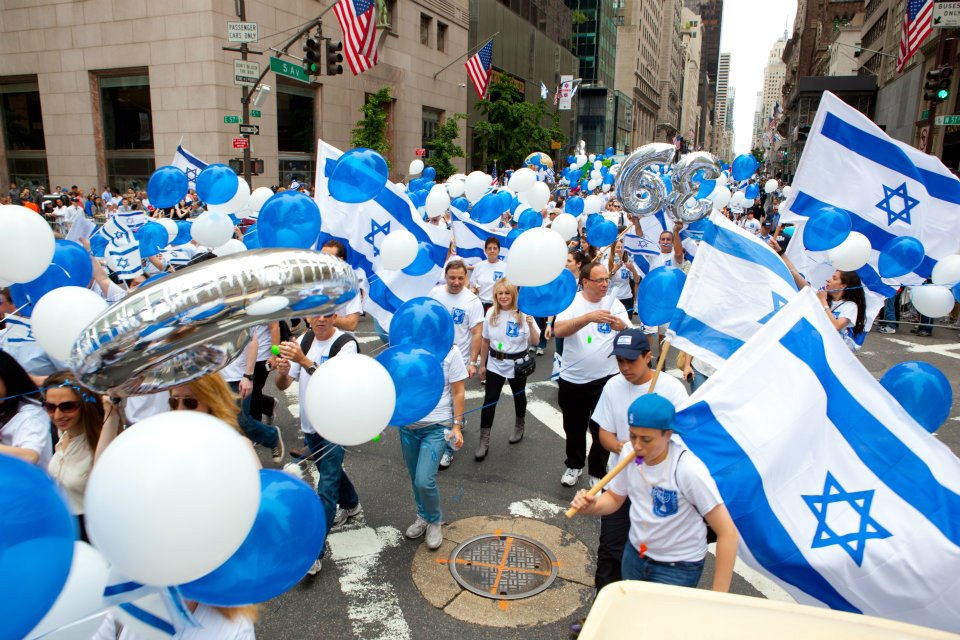 NEW YORK (JTA) – It’s America’s biggest annual show of support for Israel, and if this year’s marchers have any luck, the sun will be shining on Sunday morning when tens of thousands assemble on Manhattan’s Fifth Avenue for the 48th annual Israel day parade.

From Jewish day school contingents to the Chai Riders motorcycle club to non-Jewish marching bands to corporate sponsors riding on floats, some 35,000 marchers from 200 organizations will head up the avenue festooned with Israel’s blue and white.

“This is the biggest celebratory Israel-themed event anywhere in the world,” Michael Mittelman, the parade’s director, told JTA. “This year, we want to celebrate how Israel is contributing positively to the world.”

The theme of this year’s parade is “Israel Branches Out,” and Mittelman said participants will be dressing up as fruit, nature, agriculture and even technology.

A few are likely to be protesting. Every year, some counterdemonstrators — usually a handful of anti-occupation protesters and the fringe, anti-Zionist Neturei Karta Chasidic group — hold a small rally near the parade, which runs from 57th to 74th streets.

This year, hawkish critics of the New Israel Fund mounted a public relations campaign to try to get the NIF, which funds liberal Israeli groups and a few Israeli Arab organizations, excluded from the parade. The critics charge NIF with being anti-Israel and in favor of the Boycott, Divestment and Sanctions movement against Israel. Neither charge is true, and the calls to exclude NIF were ignored.

Turnout for the parade, which began in 1964, usually is a function of what’s happening in Israel – and the weather. In years when Israel has been embattled, such as during the second intifada, participation swelled. In 2002, an estimated 750,000 spectators came to watch 100,000 marchers.

These days the parade, which last year changed its name to the Celebrate Israel Parade from the Salute to Israel Parade, draws much smaller numbers. It also has grown increasingly Orthodox over the years; most of the marchers are children from area day schools.

The parade is organized by the Jewish Community Relations Council of New York, and funding and sponsorship come from various sources, including the Israeli government and the UJA-Federation of New York.

“We are proud to be the major supporter of what is the largest annual pro-Israel event outside the Jewish state itself,” said John Ruskay, UJA-Federation’s executive vice president and CEO. “Whether marching in the parade or lining Fifth Avenue to show our support, this is one time of the year when we put aside our differences and demonstrate how we come together for Israel when it matters most.”

Security is typically tight, with hundreds of officers from the New York Police Department lining the route and cement-filled dump trucks blocking vehicular access to the parade route.

The parade, which runs from 11 a.m. to 4 p.m., will be preceded by a four-mile Celebrate Israel Run through Central Park featuring some 6,000 athletes dressed in blue and white and followed by a concert in Central Park organized by an Orthodox group.