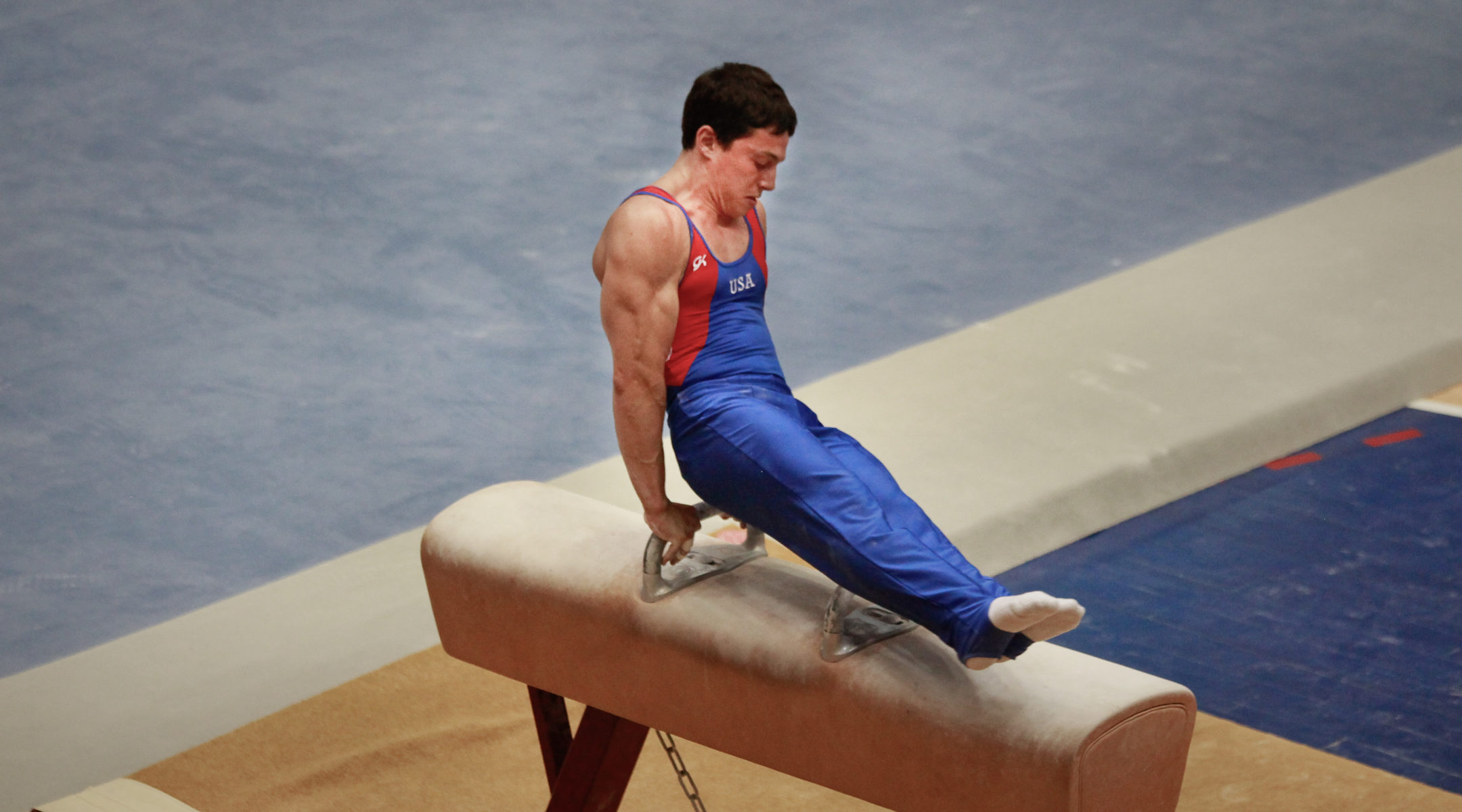 NEW YORK (JTA) — Nineteen years ago, gymnast David Sender and his family attended the opening ceremonies of the Maccabiah Games in Israel, where the then-7-year-old told his mom, “Someday, you’re all coming back here to watch me back down here.”

Sixteen years later, Sender was one of the U.S. contingent’s official flag bearers at that year’s Maccabiah Games in Israel. The gymnast went on to win five medals, including three gold ones.

Now, at age 26, Sender is set to compete at this weekend’s National Championships in St. Louis, the first competitive step in the process that will select the men’s U.S. Olympic gymnastics team.

The Maccabiah Games was supposed to have been Sender’s final international meet as an elite gymnast. But less than a year ago, he announced his return to training and competition with an eye on making the U.S. gymnastics team for the London Games.

A fluke training accident had kept him from vying for a spot on the 2008 squad in Beijing.

“Things felt a bit unfinished for me,” Sender said, explaining the reason for his return.

In 2008, Sender had just won the men’s gymnastics competition at the National Championships. He was practicing on the high bar during an Olympics Trials training session. He jumped up to still the apparatus, something male gymnasts do thousands of times without incident. When he jumped down, he rolled his ankle, forcing him to withdraw from the event.

His Olympic bid, however, was not necessarily doomed. After the Trials, nine gymnasts were named to the training squad and the Beijing lineup was chosen after a selection camp.

Sender petitioned for a spot on the training squad, hoping to be sufficiently healed by the time of the team’s selection. He was rejected. Another injured gymnast, Paul Hamm, the decorated World and Olympic champion, was named to the group and then to the team; Hamm eventually was forced to withdraw and replaced with an alternate.

Nearly four years later, Sender is asked if he understands why he — national champion at the time — was left off the training squad. He offered a lengthy pause before replying.

“The bottom line is no,” he said. “I don’t really understand it now more than I did then. I can kind of accept the decision that was made, but I still can’t quite make sense of it because I wasn’t in that meeting room.”

Sender retired from the sport after finishing his undergraduate studies and NCAA eligibility at Stanford University. He went on to veterinary school at the University of Illinois, which has a strong men’s college gymnastics program. In fact, the team just won the 2012 NCAA title and is coached by Justin Spring, a member of the 2008 U.S. Olympic bronze medal-winning men’s team.

Sender insisted that he would not return to gymnastics, Spring said, and was content to be the athlete representative on the men’s selection committee.

Still, Sender frequently worked out in the gym. He even practiced on the pommel horse, his worst event and the bane of most male gymnasts’ existence.

“Everything about this says that he was keeping in shape to make this unexpected comeback,” said Spring, who is now coaching Sender in his Olympic quest.

Spring and the rest of the Illinois team might have expected and welcomed Sender’s comeback announcement, but his parents were more wary. He told them about it over the telephone.

“[It was] one of these calls that a parent dreads. ‘Can you get dad on the phone? I want you both on the phone,’” recalled his mother, Bonnie, adding that her physician husband is sometimes summoned to the phone for less-than-positive reasons.

“My family was a little bit nervous about me coming back to the sport,” he said, referring to their concern for his physical and emotional well-being.

“All I can think of is I don’t want another injury,” his mother said.

This time, Sender is not a student-athlete; he has taken a year off from veterinary studies.

It was easier as an undergrad, he said, to miss classes for national team training camps and international competitions. In graduate school, he simply cannot miss a week of labs and patient hours to compete in gymnastics events nationally or abroad.

“If I was going to be going back to gymnastics, I wanted to put everything that I had into this year and give myself the best chance,” Sender said.

So far, Spring likes what he sees.

“[He’s] the easiest gymnast I have ever worked with,” he said. “I’m hardly his coach. I’m there to keep him balanced. He’s so internally motivated. I’m there to stop him from hurting himself.”

The effort is showing positive results so far. Sender had a strong showing at the Winter Cup, the midseason re-ranking of the men’s national team. Before the competition, most of the buzz was about Hamm’s comeback. But that soon shifted to Sender, who placed sixth in the all-around, second on the vault and third on the still rings.

Perhaps even more heartening for Sender than the official results was the warm reception he received from gymnastics fans.

“I think that at least some of the fans out there feel bad that things didn’t go very well for me in 2008 so they’re hoping I have a good comeback,” Sender said appreciatively.

Sender knows it will be even more difficult to make the 2012 team; the International Olympic Committee has reduced the number of athlete spots from six to five.

Back in 2008, Spring added, Sender was a solid all-around competitor, but he did not have a “wow” event. He does now with the return of the spectacular Yurchenko double pike vault he debuted in 2009 and upgrades he’s made to the parallel bars. Most significant are the improvements he’s made to pommel horse, the weakest event for the U.S. men’s team.

“He’s got a better shot this year,” Spring said.

Sender knows the competition will be intense, but is staying focused. As he said, “I want to finish with this sport with absolutely no regrets.”