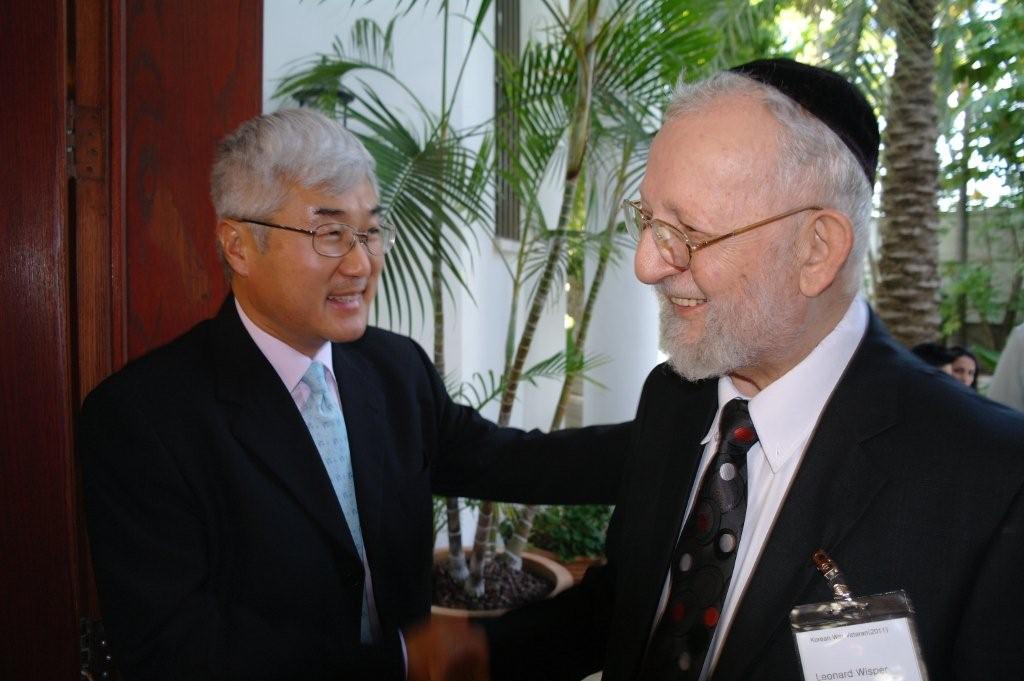 Ma Young-Sam, left, until last year South Korea's ambassador to Israel, says he feels "so fortunate" to have paid tribute to American Jewish ex-soldiers like Leonard Wisper, who he is greeting here. (Courtesy Embassy of South Korea in Israel)
Advertisement

National for Goldstein’s fighting for the United States in the Korean War. Personal because Ma’s father held a municipal government position when the communist North invaded South Korea in 1950 and might have been executed had his country lost the war.

Goldstein was one of seven Korean War veterans residing in Israel honored by Ma on June 25, 2009. The ceremony has been held each year since, with the next one set for June 25, the anniversary of the war’s start.

The upcoming gathering will be held at the South Korean ambassador’s official residence. It will be hosted by Ma’s successor, Kim Il-Soo, and also marks a half-century since Israel and South Korea established diplomatic relations. Kim has invited 25 American veterans now living in Israel and hopes, through “Seeking Kin,” to reach others who live in Israel or will be visiting.

“We Koreans appreciate very genuinely the sacrifice by foreign soldiers,” Kim said. “Without [it], we don’t know what our fate would have been.”

South Korean embassies annually honor veterans in the 16 countries that fought the North under the United Nations banner. Israel is the only country outside of the allied nations from the conflict where such a ceremony is held, Ma and Kim said. While the Jewish state did not send soldiers to fight in the Korean War, Ma’s research in Israeli archives yielded two key discoveries.

“This was 1950. Israel was not rich at the time,” Ma said last week from Seoul, where he now handles the Foreign Ministry’s public diplomacy and performance evaluation. “We appreciate that very much.”

Ma decided to honor the veterans after seeing a photograph of Normandy’s World War II battlefield cemetery, which showed a lone gravestone sporting a Star of David. With just five years separating the wars, he figured that some Jewish World War II soldiers also likely fought in Korea — and some must have retired to Israel.

He contacted the Washington-based Jewish War Veterans, which connected him with Korean War veterans living in Israel. He also spoke on the “Hamador L’chipus Krovim” (Searching for Relatives Bureau) radio program. He learned that 4,000 American Jews served in the Korean War and some were indeed living in the Jewish state.

“This is just a small return for their contributions, which were immense,” Ma said. “They saved our country. I feel so fortunate that in Israel, we could recognize their sacrifice for us before they die.”

Another veteran already honored is Netanel Blasbalg, a retired engineer living near Haifa. Blasbalg, now 81, served in the U.S. Marines from 1951 to 1953, based near Panmunjom. He welcomed Ma’s invitation to the first ceremony, and by this June 25 will have attended three of the four gatherings.

“I was tickled pink. I brought my daughter and three grandchildren because I wanted to show them how a nation expressed its thanks,” said Blasbalg, a Netherlands native who had followed his parents to Cuba and New York before he immigrated to Israel in 1955.

“It’s a lovely idea,” he added. “It’s a lesson on moral values you don’t usually come across, where a nation, after 50 [-plus] years, decides to thank all the Americans who fought. It was an important lesson for [my family] to learn.”

At the 2009 event, Goldstein delivered what Ma recalled was “a very, very emotional speech” about his combat experiences. Goldstein then broke into song — “Arirang,” South Korea’s most popular folk melody. His wife, children and grandchildren chimed in.

Ma and his staff were stunned. Goldstein explained that he felt great fondness for South Korea and had sung “Arirang” at the family’s Shabbat table ever since the war.

A month later, Ma received a call from Goldstein’s wife, Miriam. Her husband had died the previous week, but had spoken of the medal ceremony as “the most memorable moment of his whole life,” Ma recalled her saying.

The sentiment warmed Ma’s heart. Goldstein and his comrades set an example that South Korea lives by today, he said.

“We will not forget what they did for us,” Ma wrote of the soldiers in a subsequent email to “Seeking Kin.” “A Korean proverb says ‘love is transferred.’ That means that we get love from parents, but we cannot return it to our parents. Instead, we transmit our love to our children.

“Same [regarding] the help we got from friendly countries. It was great and essential help,” he said. “We cannot return it all. But we are providing our very sincere help to developing countries by sending U.N. peacekeeping forces or economic aid.”

(Please email Hillel Kuttler at seekingkin@jta.org if you are a Korean War veteran who will be in Israel and wish to attend the June 25 tribute. If you would like the help of “Seeking Kin” in searching for long-lost relatives and friends, please include the principal facts and your contact information in a one-paragraph email.)