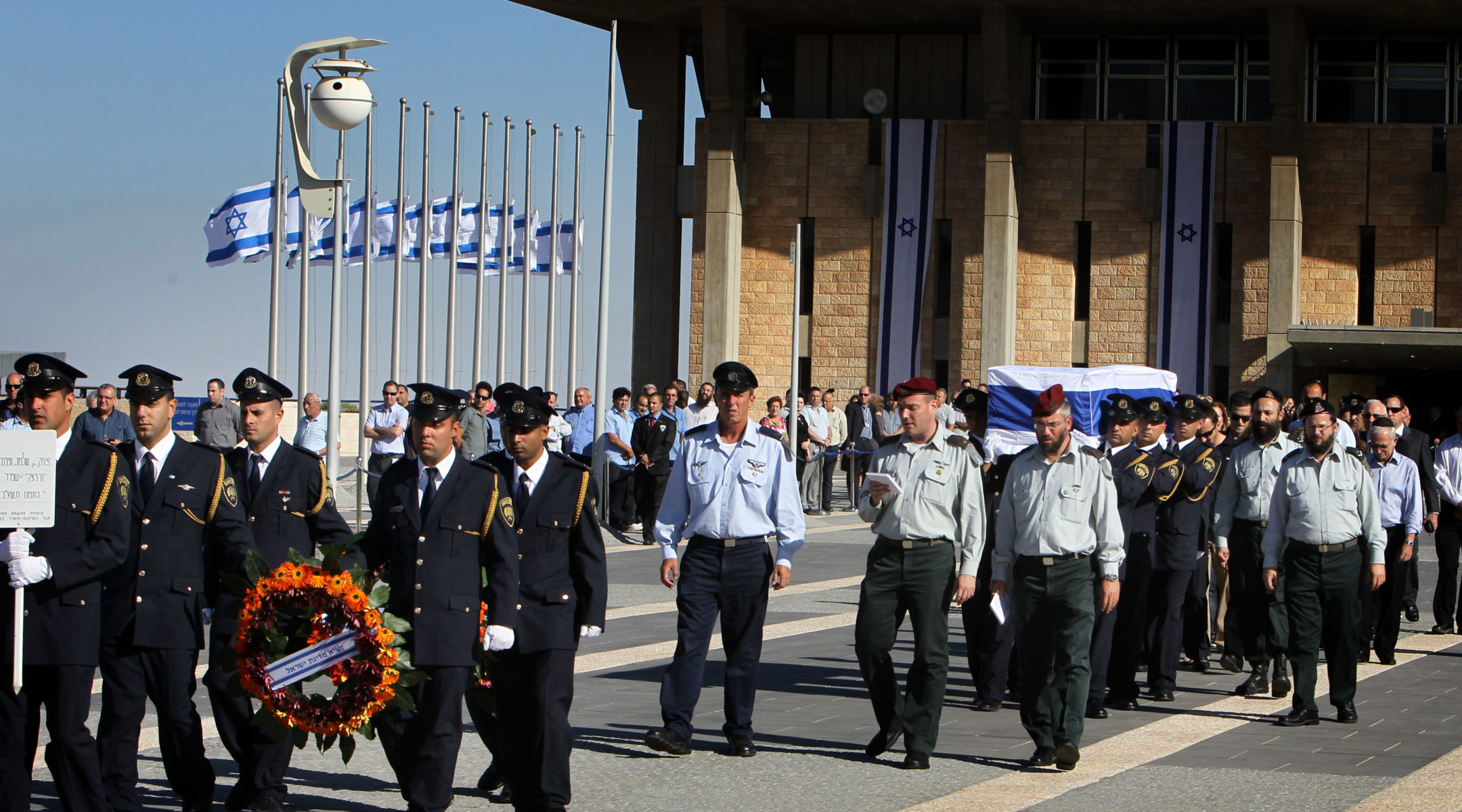 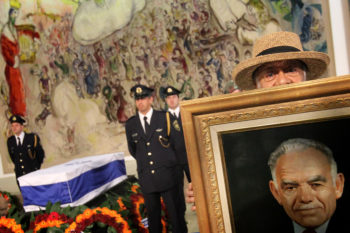 Family, friends and Israelis pay their respects to former Israeli Prime Minister Yitzhak Shamir as his coffin is seen displayed at the Israeli parliament prior to his funeral at Mount Herzl, Israel’s national cemetery, July 2, 2012. (Miriam Alster/FLASH90)

WASHINGTON (JTA) — When Yitzhak Shamir was Israel’s prime minister, he liked to point American visitors to a gift he received when he retired as director of the Mossad, Israel’s intelligence service.

It was a depiction of the famed three monkeys: See no evil, hear no evil, speak no evil.

“He didn’t say anything,” recalled Dov Zakheim, then a deputy undersecretary of defense in the Reagan administration. “He just smiled broadly.”

Shamir, who died Saturday at 96, had the reputation of a man who said the most when he said nothing at all, his American interlocutors recalled. He used that reticence to resist pressure from the George H.W. Bush administration to enter into talks with the Palestinians and other Arab nations.

“He was the most underrated politician of our time,” Zakheim said. “He sat on the fence on issues until the fence hurt.”

Shamir’s willfulness was borne of the conviction that his Likud Party’s skepticism of a permanent peace with the Arabs represented the majority view in Israel, and that the world had to reconcile itself to this outlook, said Steve Rosen, who dealt with Shamir as the foreign policy chief for the American Israel Public Affairs Committee.

“He would argue that the world will never prefer us — the Likud — over Labor,  but when the world sees that we are the Israeli majority, they will have to deal with us,” Rosen said. “We will not succeed in being more popular than the others, but we are right.”

There was inevitably a personal element to his clashes with the elder President George Bush, said Zakheim.

“He had his difficulties with the United States in part because he came from such a different place than George H.W. Bush,” he said. “One was a product of old-time Jewish Lithuania whose father was shot in the face by the neighbor when he was looking for protection from  the Nazis, the other was an aristocrat. Since most relations at that level are personal, that always complicated matters.”

His detractors, while praising Shamir’s patriotism, also fretted that his steadfastness cost Israel during his terms as prime minister.

Douglas Bloomfield, in 1988 the director of AIPAC’s legislative arm, recalled in his weekly column how Shamir, then the prime minister, was blindsided by President Ronald Reagan’s decision in his administration’s closing days to recognize the reviled Palestine Liberation Organization.

“The premier’s chief of staff immediately phoned his contacts on Capitol Hill urging them to ‘start a firestorm of opposition’ to block the move,” Bloomfield wrote. “It was too late. Too many members of Congress shared the Reagan administration’s frustration with what they considered Shamir’s intransigence and did not seriously object when Reagan decided to recognize the PLO on his way out the door as a favor to his successor.”

During his tenure, Shamir clashed with much of American Jewry when he flirted with changing the Law of Return to define Jews according to strictly Halachic terms to satisfy potential Orthodox coalition partners, and also because of his insistence on settlement expansion.

Rabbi Eric Yoffie, the immediate past president of the Union for Reform Judaism, said Shamir — unlike other contemporaries like Yitzhak Rabin, Shimon Peres and Ariel Sharon — had little experience with or understanding of American Jews.

“Shamir was a whole different story, these weren’t issues he cared about at all,” recalled Yoffie, who at the time Shamir was prime minister headed ARZA, the Reform movement’s Zionist wing. “He had no experience with them, he had far less contact with American Jewry, it wasn’t part of his background, he didnt spend a lot of time here giving speeches.”

Shamir was a politician dedicated to advancing his principal goal, which was maintaining Israeli control of the lands won in the 1967 Six-Day War, Yoffie said; when reaching out to the Orthodox advanced that goal, he did so, and when backing away from changing the Law of Return made more sense in order to preserve the alliance with U.S. Jews, he did that too.

“When he realized there would be this profound breach, he backed away,” Yoffie said. “When you’re  a hardheaded realist and Greater Israel is your goal, you need allies.”

But the community rallied around Shamir in December 1991 when President George H.W. Bush sought to tie a $10 billion U.S. loan guarantee to help resettle Jews flooding into Israel from the former Soviet Union to money Israel spent on settlements. Bush cast himself as “one lonely guy” facing “some powerful political forces” — a framing many Jews saw as borderline anti-Semitic.

Shamir’s successful absorption of hundreds of thousands of Jews from the collapsing Soviet Union, and his suprise secret transport of thousands of Ethiopian Jews in Operation Solomon also restored respect and affection for him among American Jews.

Shamir’s most lasting legacy might be his scuttling in 1987 of the London agreement after he assumed the prime ministership from Shimon Peres in a power-sharing agreement following the deadlocked 1984 elections. The agreement, which Peres worked out — mostly in secrecy — with Jordan’s King Hussein would have restored a degree of Jordanian authority to the West Bank and may have spared Israel the first intifada that broke out soon after. The intifada bore the failed Oslo peace process, which bore the much bloodier second intifada, culminating in today’s impasse.

“His shooting down of Shimon Peres’ ‘London Agreement’ with King Hussein of Jordan was arguably the most disastrous decision an Israeli leader ever took,” David Landau wrote in an appreciation in Haaretz on Monday.

Yet Shamir was not incapable of pragmatism. He defied Israeli public opinion — and young bucks in his own party, including then deputy foreign minister Benjamin Netanyahu — and acceded to Bush’s request to keep out of the first Iraq War, even if Saddam Hussein provoked Israel, which Hussein did with a barrage of Scud missiles.

Marshall Breger, a former Reagan administration official who at the time still functioned as an unofficial liaison between Bush and the Jewish community, said Shamir earned kudos with that decision.

“He was extremely pragmatic and somebody who when the chips were down tended to make good decisions,” Zakheim said.

Shamir, notably, earned affectionate references in the memoirs of U.S. figures who were among his most frustrated interlocutors when they faced each other as leaders, among them the elder Bush, national security adviser Brent Scowcroft and Colin Powell, who under Bush was the chief of the military Joint Chiefs of Staff.

Shamir was not a comfortable campaigner. In the 1992 elections he lost to Yitzhak Rabin, advisers told him to exude more warmth. Appearing at a late-in-the-game rally in Maaleh Adumim — a West Bank settlement and city, and what should have been a natural constituency — he stood at the podium, his diminutive figure nearly swallowed by the stage, threw open his arms and shouted “I love you!” The crowd murmured nervously.

Yet one on one, he exuded warmth and determination. Shamir would take constitutional walks around the prime minister’s residence in Rehavia, followed by a single security guard, and stop to chat with everyone, giving extra time to recent immigrants and congratulating them on their decision to move to Israel.

His mantra was land. After Oslo, still serving as a backbencher after Netanyahu had succeeded him as party leader, Shamir decried in a Knesset speech the ceding of the Gaza Strip, citing biblical injunctions about preserving the land of Israel. A Labor backbencher shouted that Gaza is not part of biblical Israel. Shamir shrugged.

“We were taught that territory is sacrosanct,” he said.

Breger said Shamir understood what the other side wanted — but stuck to what he wanted.

“I had occasions to talk to him when he was rubbing up against Bush 41 and urged him to pay attention to how serious Bush was about building in the territories, which culminated in Bush’s effort to reduce the loan guarantees dollar by dollar for what was being spent in the territories,” Breger said. “You had the feeling that he didn’t reject what I said, but he had made up his mind and would go forward.”

That posture set a standard for Shamir’s successors, said Rosen.

“He stood for a set of core principles that are still the bedrock of the right wing but I would argue have influenced the center, too,” he said. “Skepticism of the seriousness of the Arabs on permanent peace, a reliance on self-defense and not on agreements that rely on the will of others, skepticism of great power guarantees.”

Breger agreed, noting that in later years “there was more respect” in the American establishment “for Ariel Sharon being a rock — but maybe because by then, they were used to Israeli rocks.”