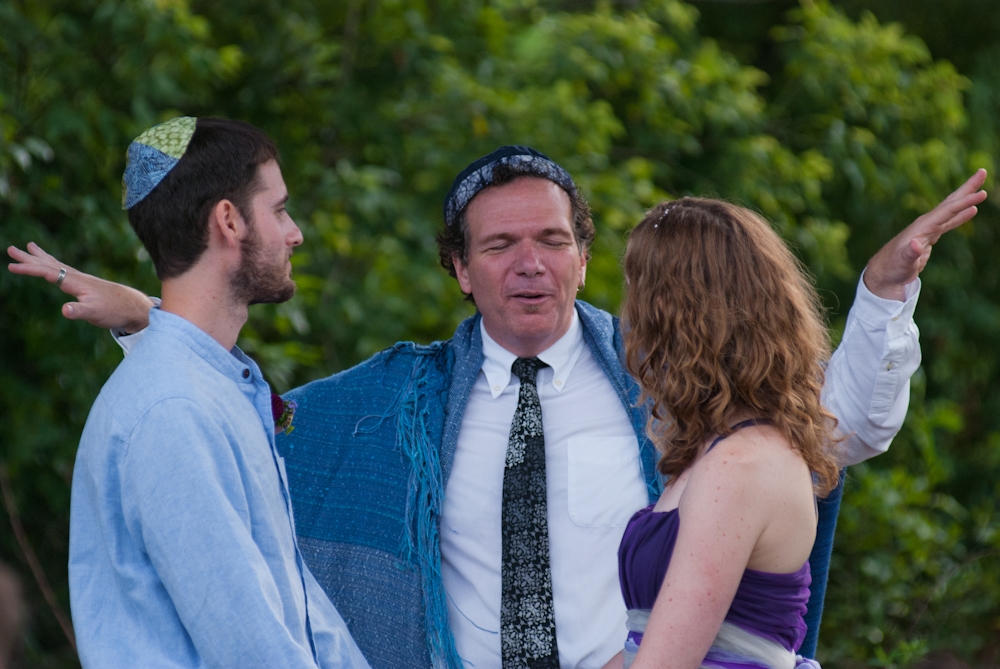 BOSTON (JTA) — Danny Richter and his fiancee, Lauren Perkins, have never been to a Jewish wedding. That’s about to change. This fall, the interfaith couple is planning to be married in a Jewish wedding ceremony.

The wedding marks other significant firsts: It also will be the first time that Rabbi Jill Perlman, assistant rabbi at Temple Isaiah in Lexington, Mass., has ever officiated at an interfaith wedding. In fact, it will be the first time that any clergy from the Reform congreation — Richter’s family synagogue for three generations — will have done so.

While the congregation has approved Perlman’s participation, it has yet to decide if intermarriages may take place within the synagogue itself.

The changes under way at Temple Isaiah are part of the new norm in the Reform movement as it continues to explore how best to respond to intermarriage, shifting its approach on the sensitive issue of its rabbis officiating at intermarriages.

The movement has “moved away from the debate of whether we should or should not officiate,” said Steven Fox, chief executive of the Central Conference of American Rabbis, the rabbinic arm of the Reform movement that represents 1.5 million Reform Jews in North America. “It’s part of the world we live in. The question is how do we engage these families into our synagogues,” he said.

CCAR does not have statistics on how many of its 2,000 Reform rabbis in North America officiate at intermarriages, but when pressed, Rabbi Hara Person, director of CCAR Press, said it’s about half.

The organization “believes it is not an appropriate way to judge someone as a rabbi,” Person said of performing the ceremonies.

While Isaiah’s senior rabbi, Howard Jaffe, describes the change since he was ordained in 1983 as seismic, Rabbi Daniel Freelander, the Union for Reform Judaism’s vice president, says the change has been evolutionary. Everyone interviewed for this story agreed that it has become much more common in the past decade for Reform rabbis to officiate at intermarriages.

In fact, next month CCAR will publish a Premarital Counseling Guide for Clergy, the first such manual prepared for the organization, according to Person.

The manual, written by Paula Brody, director of the Union for Reform Judaism’s Outreach Training Institute, is intended for use with all couples, but it also includes a separate section for counseling of intermarried and conversionary couples. The goal is to give clergy more tools to help couples discuss the meaning of their faith background, Brody told JTA.

Brody’s exercises delve deeply into both partners’ childhood experiences from their faith backgrounds to enable a couple to be able to discuss the sensitive issue of how they will raise any future children. “It means a tremendous amount to the person from a different faith background to know they are being recognized,” she told JTA.

In a highlighted section, Brody writes, “The Jewish community has been blessed to have had so many individuals from other faith backgrounds give the gift of raising Jewish children. Tremendous appreciation needs to be expressed by the partner, the partner’s family, and the Jewish community for giving this gift to Judaism.”

The manual also includes suggestions for follow up, a key factor that is now lacking, according to many observers.

Last month, Brody held a series of training sessions for clergy and professional staff based on the manual.

Rabbi Wendi Geffen of North Shore Congregation Israel, a Reform congregation in Glencoe, Ill., that recently announced its clergy would officiate at intermarriages, was among those who participated. She said she initially wondered why non-Jewish partners should be encouraged to think deeply about their religious past.

But she came to realize that by discussing these issues of faith, it becomes easier for a couple to eventually talk about how they would bring up their children as Jewish, she told JTA.

Some rabbis set conditions – such as joining a synagogue or committing to raising future children as Jews — before they’ll officiate at an intermarriage.

Rabbi Lev Baesh worries such conditions turn off couples. “It matters so much for a rabbi to say, ‘yes,’” no matter where the couple is in the process, says Baesh, director of the resource center for Jewish clergy for Interfaithfamily.com, a resource and service organization that supports Jewish life for interfaith couples.

Knowing how much officiation means to couples is why Geffen will perform her first intermarriage in the fall.  “I don’t want to shut the door if someone is coming in,” she told JTA.

It’s also why Isaiah’s Perlman will do Richter’s wedding ceremony.

As a rabbinical student, Perlman said, she was not comfortable with the idea. But she has shifted her views since her 2010 ordination. “It’s a blessing in my opinion to be there in that moment,” she said.

Isaiah’s Jaffe, remains deeply committed to the view that Jewish marriage can only take place between two Jews, and that the rabbi’s role is to facilitate this marriage. But, after a year of a year of study and discussion of the subject with Perlman and Cantor Lisa Doob, he says he is comfortable under certain circumstances with his associate rabbi officiating at intermarriages.

He also told JTA he is no longer so certain that his personal opposition outweighs the potential loss of a couple from Jewish life.

As more congregants, like Richter, approach him as their family rabbi, he said he recognizes his view of Jewish marriage is seen as a rejection. “I am aware of the impact of my saying, ‘I love you, I want to welcome you into the Jewish community, but I am not able to officiate.’ I know that in most cases, the words, ‘I am not able,’ are heard as ‘I am rejecting you,’ even though that is not the message I am intending,” Jaffe said.

Jewish population studies have found that as many as 50 percent of Jewish households include a non-Jewish partner. Observers suggest that the number is even higher when one looks at the dating population.

Orthodox and Conservative rabbis do not officiate at interfaith marriages. The Conservative movement does, however, engage in outreach work with interfaith couples at all stages of their lives, according to Rabbi Julie Schonfeld, executive vice president of the Rabbinical Assembly.

In 2008, JTA reported on a series of scholarly studies that challenged the prevailing view that intermarriage itself was causing disengagement in Jewish life. One study, by Brandeis University researchers Leonard Saxe and Fern Chertok of the Cohen Center for Modern Jewish Studies, noted that homes filled with Jewish rituals and learning had more influence on Jewish continuity than whether the family was intermarried.

The researchers urged the Reform movement in particular to encourage Jewish engagement among all families and worry less about intermarriage.

Chertoff told JTA there is no research one way or the other on whether rabbinic officiation has a positive impact on later Jewish involvement.

Historically, CCAR has opposed its members officiating at intermarriages. In 1973, it reaffirmed that opposition, but also recognized that its members hold divergent interpretations, with each making his or her own decision.

A resolution proposed at CCAR’s 2008 annual convention called for dropping the official opposition. To avoid a polarizing debate on the hot button issue, the resolution was tabled.

Two years ago a task force on intermarried issued a report affirming that continuity is more likely for inmarriages. But there is a significant opportunity among intermarrieds, as well, the report noted, and called for strengthening outreach efforts and providing more resources to its rabbis. The new premarital counseling manual was an outgrowth of the recommendations.

The message, says Rabbi Charles Kroloff, who headed the task force, is “Don’t give up.”