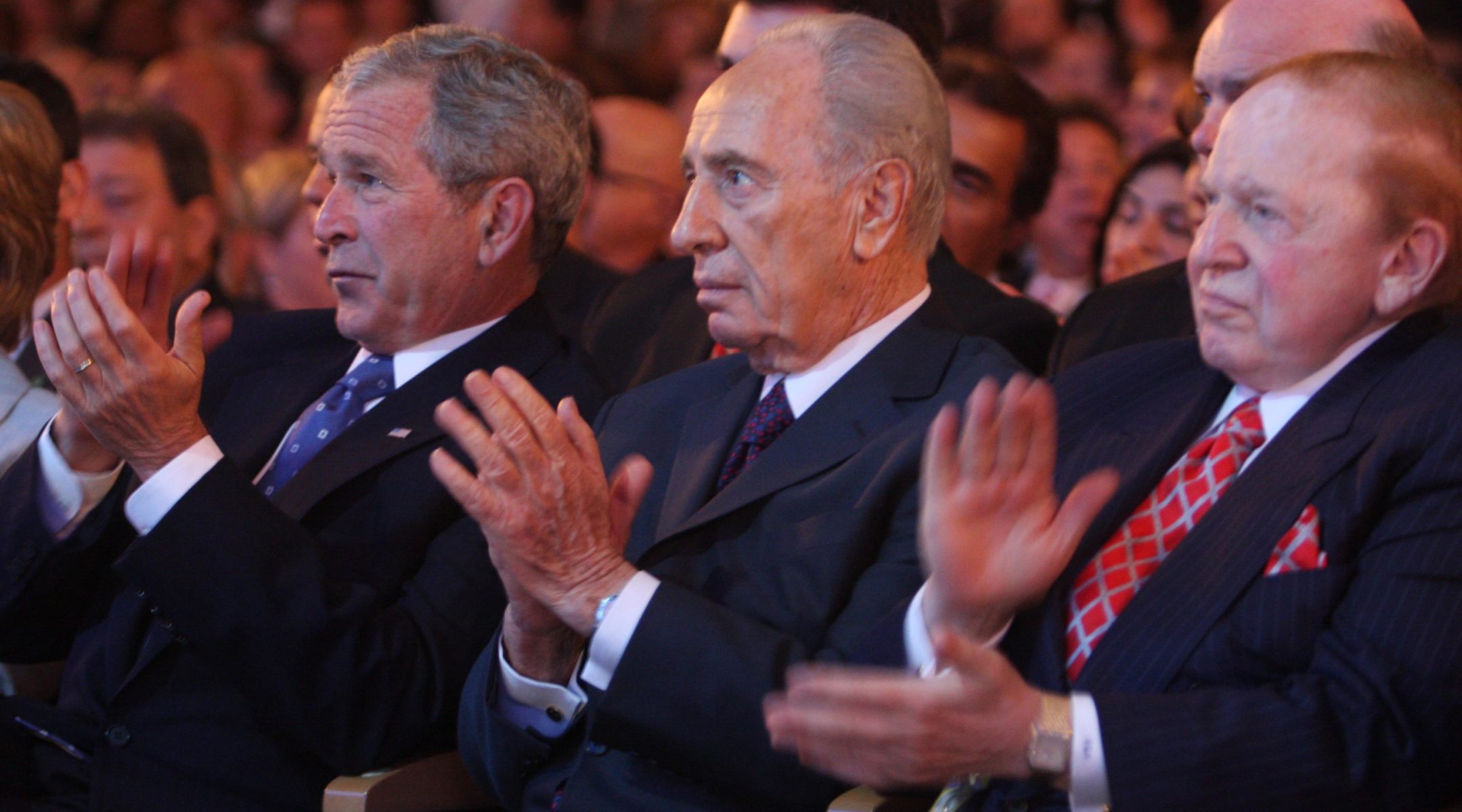 Sheldon Adelson, right, seen here with then-President George W. Bush and Israeli President Shimon Peres at a Jerusalem conference in May 2008, is at the center of controversy over contributions earmarked for Republican candidates. (Nati Shohat /FLASH90 )
Advertisement

WASHINGTON (JTA) — Sheldon Adelson, whose cash and rhetoric has hit candidates hard this election cycle, just got swiped himself.

The “dirty money” jibe, in turn, has seen the NJDC slammed with charges of “dirty politics,” and not just from Republicans. Prominent civil rights attorney Alan Dershowitz and the Anti-Defamation League’s Abraham Foxman also have called on the Jewish Democratic group to stand down.

Adelson, who was a major backer of Newt Gingrich’s failed GOP presidential campaign, has given tens of millions of dollars this year to conservative SuperPACs, political action committees permitted by law to raise limitless amounts of money but which may not work directly with a candidate.

The NJDC call followed revelations last week of allegations in a lawsuit filed by Steven Jacobs, a casino executive who was fired by Adelson in 2010, claiming that Adelson approved of allowing prostitutes to operate in his Macau casinos.

In a petition drive sent to its supporters, the NJDC suggested that the prostitution allegation was part of a pattern of bad behavior by Adelson. The NJDC will not release the number of signatures, but the petition likely will be sent to the Republican Party and the Romney campaign, according to David Harris,  the Democratic group’s president and CEO.

“It’s well known that Adelson makes tremendous sums of money through his casinos in China which — according to 2008 Republican presidential candidate Senator John McCain (AZ) — means that Chinese ‘foreign money’ (to quote McCain) is flooding our political system,” the petition said. “But this week, reports surfaced that in addition to his anti-union and allegedly corrupt business practices, Adelson ‘personally approved’ of prostitution in his Macau casinos.”

Adelson’s spokesman did not return a request for comment for this article.

Matt Brooks, the director of the Republican Jewish Coalition, said the NJDC’s call was “disgusting” because it was based on allegations in a lawsuit filed by a disgruntled ex-employee.

“Setting aside their partisan agenda, the NJDC should be ashamed of itself for attacking someone who has done more for the Jewish community and Jewish philanthropy than anyone in recent history,” Brooks said, citing Adelson’s major contributions to the Birthright Israel program that brings Jewish youth to Israel, and to Yad Vashem, Israel’s Holocaust memorial museum.

Adelson is a multimillion-dollar donor to both efforts, and also is a major backer of the RJC.

“If this is proven to be nothing more than rantings of an employee in legal battle, NJDC is going to have a lot of egg on its face,” Brooks added. “If they were truly mensches about it, they would wait until it is adjudicated.”

Over the weekend Dershowitz, who pointed out in his column that he is a Democrat, and Foxman, also weighed in.

“Harris has apparently credited this claim even though no evidence has been submitted to support it and no finding has been made by any court,” Dershowitz wrote in a column cross-posted on the Huffington Post and The Jerusalem Post. “Has he never heard of ‘due process’ or the ‘presumption of innocence?’ ”

Foxman likened the attack to those in 2010 on a major Democratic funder, George Soros, who is Jewish and had been falsely accused of being a “collaborator” during the Holocaust against evidence that he had endured it as a youngster forced into a false identity.

“I was flabbergasted,” said Foxman, who had reached out to news outlets, including JTA, after reading of the NJDC petition. “We knew that this campaign would get somewhat extreme, but for the Jewish element in the Democratic Party to resort to character assassination I think is pretty sad.”

Adelson is not a stranger to being on both sides of tough attacks that border on the personal. His money helped to keep alive for several months Gingrich’s recent presidential campaign and funded attack ads that depicted Romney as out of touch with the needs of working people. Adelson and his wife, Miriam, have pledged to do the same for Romney in his battle against President Obama.

In March, in an impromptu address to a session at TribeFest, a Jewish Federations of North America event for Jewish youth held in Las Vegas at the Adelson-owned Venetian, Adelson shocked some attendees by mocking Obama and likening the president to a baby, according to several of those present.

Harris said the charges in the NJDC petition were fair because he said they were based on a “pattern” of allegations, although none have yet to be proven. Adelson is under federal investigation for bribing Chinese officials.

Harris acknowledged Adelson’s good works. “One can do something good and bad; this shouldn’t be incomprehensible,” he said.

He dismissed charges of character assassination, noting efforts by the RJC and others to depict Obama as implacably hostile to Israel, as opposed to delineating differences on policy between two candidates who otherwise favor a strong U.S.-Israel relationship.

“None of this is couched in terms of disagreement on policy,” Harris said. “It is couched in personally the most hateful ways towards these people.”

He noted that Brooks in a blog post last year wrote that “members of the President’s inner circle seethe with antagonism toward Israel’s democratically elected leader.” Brooks, in his blog post, was writing about reports in the media at the time describing frustrations by senior Obama administration officials with what they perceived as Israeli Prime Minister Benjamin Netanyahu’s lack of respect for the president. One report in Bloomberg said that the then-defense secretary, Robert Gates, believed Netanyahu to be “ungrateful.”

At the time, Brooks’ attack was the kind of broadside that prompted the ADL and the American Jewish Committee in a joint appeal to call on parties “to put Israel ahead of politics” and not to sow division. Brooks and other conservatives condemned the ADL-AJC call as an attempt to silence their criticism of Obama.

The Jewish Council of Public Affairs made civility a theme of its most recent colloquium in May. Its director, Rabbi Steve Gutow, declined to comment to JTA on the latest fracas involving Adelson.

The Jewish Federations of North America, in a rare comment on electoral politics, cited a JCPA pledge that Harris had signed in its call on the NJDC to stand down from its attack.

“To condemn a man based on unsubstantiated charges violates our American and Jewish values,” said a statement signed by the JFNA leadership. “It also breaches the Jewish Council for Public Affairs’ Civility Statement, which was signed by both the NJDC and JFNA. That document commits us to ‘respectful dialogue’ and ‘to treat others with decency and honor and to set ourselves as models for civil discourse, even when we disagree with each other.”

The pledge was signed by individuals, not groups. In addition to Harris, Brooks had signed it.

Asked if he would consider reissuing the joint ADL-AJC appeal, Foxman laughed and said, “Maybe we should send it out again and get clobbered like we did last time.”