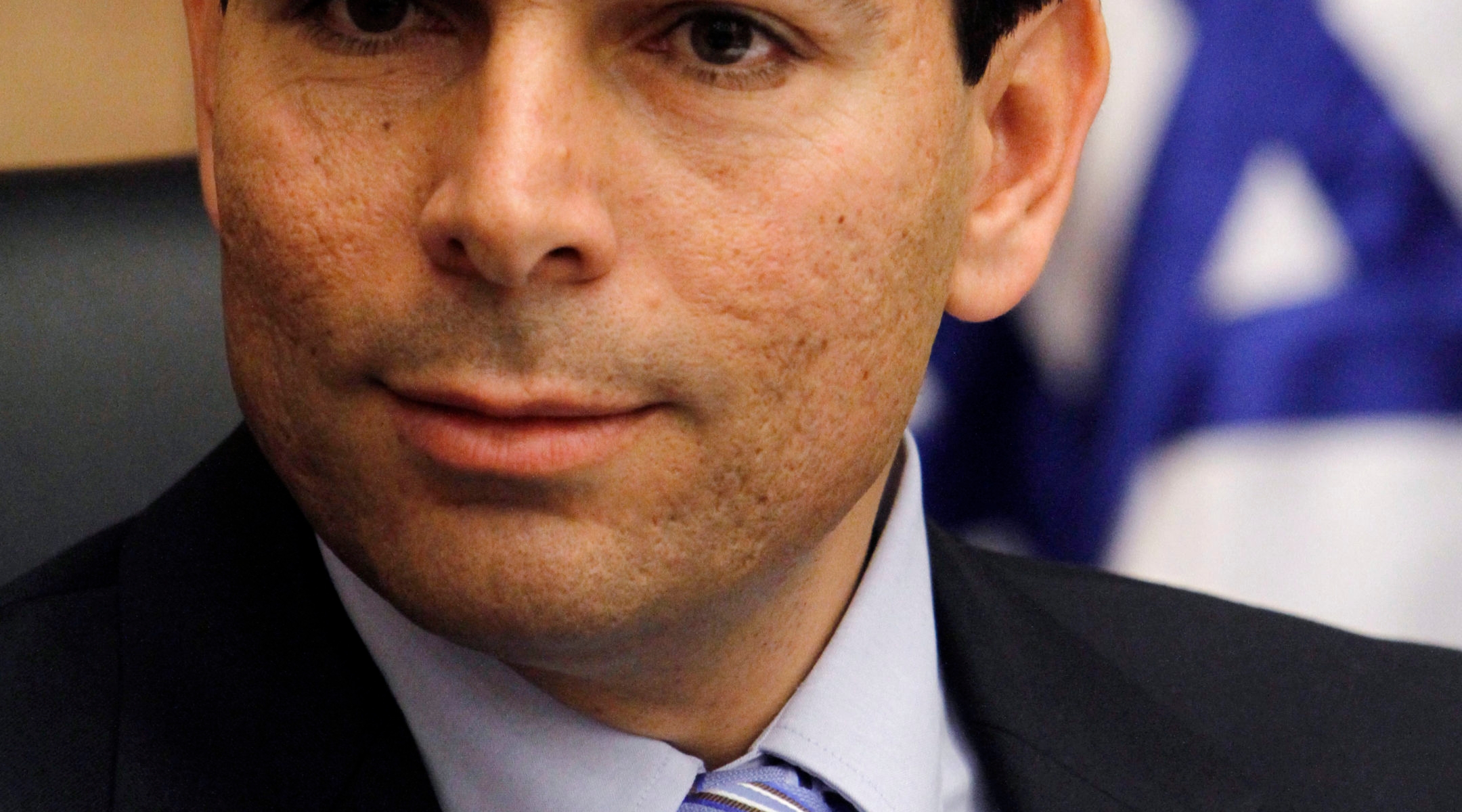 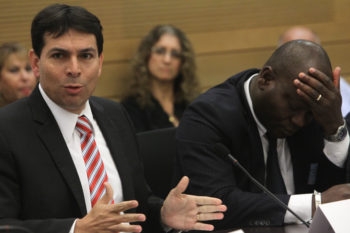 JERUSALEM (JTA) – If there’s one thing Danny Danon doesn’t do, it’s shy away from controversy.

Danon, a deputy speaker of the Israeli Knesset and chairman of World Likud, has come under fire for describing African migrants in Israel as a “national plague,” for hosting controversial U.S. TV personality Glenn Beck at the Knesset and for demanding government investigations of left-wing NGOs.

Though Danon is in his first term in the Knesset, his profile is rising quickly on the Israeli political scene — perhaps more than anything else because of his unapologetically nationalist vision for Israel’s future.

He wants Israel to annex all the Jewish-occupied and uninhabited land in the West Bank. He wants Palestinians living on the remainder of the West Bank to become part of Jordan, Egypt to take control of the Gaza Strip and the international community to reject the establishment of a Palestinian state on the west bank of the Jordan River (it’s fine by him if the Palestinians take over the Hashemite Kingdom of Jordan on the east bank). Danon does not believe in land for peace or the two-state solution.

Danon outlines his blueprint for Israel’s future in a book due out in September, “Israel: The Will to Prevail

,” though the book focuses more on history than the details of the blueprint.

“I’m working very hard to present a different approach for the peace process,” Danon told JTA in a recent interview in his Knesset office. “Our goal should be to annex the maximum land with the minimum Arab population,” he said of the West Bank. “We should speak about our rights and not apologize for it. We have biblical rights, historical rights, rights according to international law. We also have common-sense rights: We won the war.”

While his ideas might seem far-fetched and antiquated — a throwback to notions that haven’t been discussed with much seriousness since the pre-Oslo era — Danon believes Israelis are warming to them.

“We live in the Middle East; everything is dynamic here. With time it can be feasible,” he said. “I don’t accept that my views are on the fringe. I do believe one day they will be accepted.”

Danon’s detractors fear this is becoming true – in Israel, at least.

“Ostensibly, one could even ignore the existence of this Likud backbencher, but little Danny Danon will be big, the sugar of the Israeli right,” Haaretz columnist Gideon Levy, a left-wing critic, wrote last summer. “So it’s better to pay attention to him now rather than later.”

“Danon’s contribution to the political discourse is important: Enough with the euphemisms, dump the deceit, down with the pseudo-democracy under which one can be both a proponent of the occupation and a democrat, an oppressor of minorities and a liberal, a nationalist and enlightened, the way Likud ‘moderates’ are trying to be,” Levy wrote. “True, Danon is making Prime Minister Benjamin Netanyahu look like a moderate and Transportation Minister Yisrael Katz look even better, but Danon is Likud’s 3G.”

Born in Ramat Gan, a city contiguous with Tel Aviv, Danon, 41, was raised in a deeply Zionist household. His father, who immigrated to Israel from Egypt in the early 1950s, was wounded in 1969 while serving in the Israel Defense Forces during the War of Attrition with Egypt. Danon grew up steeped in the Beitar youth movement, the Revisionist Zionist society founded by Ze’ev Jabotinsky.

Aside from his penchant for controversy, Danon has a few things going for him: He’s personable, media savvy and articulate in English. (He earned a bachelor’s degree at Florida International University and later worked in Miami as an emissary for the Jewish Agency for Israel.) Earlier this year, Danon won praise for co-sponsoring a Knesset bill that compelled advertisers to disclose on their ads whenever they digitally alter images to make models appear thinner.

But Danon is better known for sponsoring nationalist legislation targeting left-wing groups and Israeli Arabs. Aside from his bills aimed at Zuabi, Danon in 2008 filed a petition with the Israeli Supreme Court to rescind the citizenship of former Arab Knesset Azmi Bishara for possibly aiding Hezbollah in the 2006 Second Lebanon War. The effort, aimed at stripping Bishara of his Knesset pension, ultimately failed.

Danon, who accuses Israeli-Arab leaders of trying to “use democracy to destroy democracy,” also wants to outlaw Israeli-Arab incitement against Israel. Under his plan, Arab Israelis would be required to take an oath recognizing Israel as a Jewish, democratic state; those who refuse would not be able to obtain a passport or driver’s license.

When a growing chorus of left-wing Israelis backed a boycott last year of a new cultural venue in the Jewish West Bank settlement of Ariel, Danon proposed a law allowing settlers to sue those behind the boycotts. The bill passed.

And when controversy erupted in May over illegal African migrants in Israel, Danon led the calls for their immediate expulsion, using his bully pulpit as chairman of the Knesset Committee for Immigration, Absorption and Diaspora Affairs to warn of the influx of Sudanese Muslims into the Jewish state.

It’s all part of Danon’s ultimate goal: the fostering of an unabashedly Zionist state stretching from the Mediterranean Sea to the Jordan River with as few non-Jews as possible.

More often than not, Danon has found himself on the wrong side of history.

When Yitzhak Rabin shook hands with Yasser Arafat on the White House lawn in 1993 during the signing of the Oslo Accords, Danon, 22 at the time, was on the street out front protesting. When Ariel Sharon pulled Israel out of the Gaza Strip in 2005, Danon opposed it. When Israeli Prime Minister Benjamin Netanyahu endorsed a demilitarized Palestinian state in a speech at Bar-Ilan University in June 2009, Danon spoke out against it.

“I haven’t changed my policies or ideology for last 20 years, since the Oslo Accords,” Danon said.

But now, Danon believes, history is coming around. Israelis’ confidence in the principle of land for peace has been shaken by the Arab Spring and the newly bellicose tone from Egypt; by the wars and rocket fire that has followed Israel’s withdrawals from Lebanon and Gaza; and by the instability of the Arab regimes around Israel. While polls show most Israelis remain committed to a two-state solution, few think it’s achievable right now. Israel’s left-wing opposition is in tatters; the right wing is growing.

The idea of scrapping a Palestinian state and letting Israel annex most of the West Bank may be a non-starter internationally — not to mention in most of Tel Aviv — but Danon has one word: Wait.

“In the Middle East you cannot put a time frame on peace. People look for an instant solution, but it’s not going to work,” he said. “I think we have to fight to present our case. I don’t have control over what happens in Jordan, Lebanon and Egypt, but I want control over what’s happening in my backyard.”