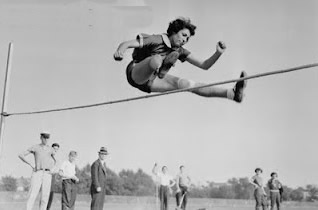 Unofficially, JTA is keeping an eye on the progress of some 44 Jewish and Israeli athletes competing at the 2012 London Olympic Games.

In 1936, athletes from both the U.S. and Nazi Germany were excluded from competition in the Nazi-held Olympics in Berlin because they were Jewish.

One of them is still alive today.

[[READMORE]]
Simon Usborne wrote a profile of Margaret Bergmann Lambert, 98, in an article published by The Independent on Tuesday:

When Gretel Bergmann watched the 1936 Olympics in Berlin, she knew the Nazis were keeping a secret from the watching world. The Jewish athlete was the best female high jumper Germany had produced, but on the eve of the Games, she had been expelled from the national team. Sports authorities told her she was not good enough, teammates learned she was “injured” and her name was scrubbed from the record books.

The article, in which Usborne interviews Lambert, is a fascinating read. (The athlete who replaced Bergmann, Dora Ratjen, was either intersex or male.)

The basic details of Lambert’s ordeal are verified in JTA reports from Berlin at the time:

BERLIN, Jul. 16 (JTA) – Greta Bergmann, "non-Aryan" high-jump champion, has been dropped from the German Olympic team and Helene Mayer, half-Jewish fencing star, put in fourteenth place, it was revealed today with publication of the official list of the team.

Miss Mayer, who resides in California, and is now the only "non-Aryan" on the German team, occupies fourteenth place despite the fact that she is expected to win the fencing championship for Germany.

Der Angriff, Propaganda Minister Goebbels’ paper, explains the dropping of Miss Bergmann on the ground that the German Olympic Committee had decided to reduce the number of high-jumpers by eliminating one woman from the team.

This action was taken, the paper says, because Germany has no chance of taking first place in the high-jump event, owing to the excellence of the American and Japanese competitors.

Some saw the exclusion of Bergmann and Mayer as inevitable. A December 1935 campaign by The Manchester Guardian to boycott the Berlin Games presciently predicted that Nazi Germany’s invitation to these Jewish athletes was insincere:

The invitations to Greta Bergmann of Stuttgart and Helene Mayer, now living in California, to compete for the German team were characterized by the Guardian as "a gesture to placate opinion in the United States," the result of a visit by Brig. Gen. Charles H. Sherrill to Germany last September.

A gag order was placed on the Jewish press in Berlin, preventing these outlets from reporting the injustice.

Germany wasn’t the only country to pull Jewish athletes from competition; the U.S. did the same. JTA shared details of one such incident while reporting a 1996 exhibit at the United States Holocaust Memorial Museum that examined the 1936 Games:

There is, for example, the story of American Jewish athletes Marty Glickman and Sam Stoller.

Hours before they were to compete in the trials for the 4 x 100-meter relay, Glickman and Stoller were pulled off the heavily favored U.S. team.

There were strong rumors, U.S. coach Dean Cromwell told the Jewish athletes, that the Germans were hiding their best sprinters and saving them to upset the American team in the relay.

Therefore, Glickman and Stoller would have to be replaced by Jesse Owens and Ralph Metcalfe, both of whom had never trained in the relay.

The move left Glickman baffled, but he now says he has a clearer picture of what happened. He points a finger squarely at Avery Brundage, president of the Amateur American Olympic Committee, who is widely believed to have been a Nazi sympathizer.

"He wanted to save Hitler the humiliation of seeing Jews standing on the winning podium," Glickman said of Brundage, who later became a member of the America First Committee, a group that supported the Nazis.

Whether Avery Brundage was an anti-Semite was a question addressed by former JTA sports writer Haskell Cohen in an article published during the 1984 Olympic games in Los Angeles. Cohen’s closing paragraph paints a rather damning portrait of the AAOC president:

Brundage maintained a steady flow of correspondence with anti-Semitic sports figures, including the German Nazi, Karl Ritter von Halt, and his followers. Von Halt was a member of the Nazi Party since 1932 and was able to, as head of the sports division, use his influence in the reorganized Nazi sports movement. One of his associates, Clarence Count Rosen, an International Olympic Committee member from Sweden, wrote a letter to Brundage congratulating him on his victory in the AAU battle. "I can’t tell you how happy I am that you conquered the dirty Jews and politicians."

After the war, when the Nazi atrocities against the Jews were revealed in all their horror, Rosen wrote to Brundage: "Do everything possible to stamp out this mad expression of Jewish fanaticism. Jews are at the bottom of all the disturbances in the civilized world. Communism is their political creed and their weapon whereby they hope to destroy all organized civilization."

Brundage replied briefly: "From your letter I observe with pleasure that you are in fine form and I anticipate a happy reunion next month. In any event, we certainly agree on the subject mentioned in your letter."

Outside the sports field, Brundage, in 1940, headed the isolationist "Citizens to Keep America Out of War Committee." In 1944 he made an abortive attempt to run for Governor of illinois. No attempt has been made by any historian or biographer to determine what influenced Brundage to become an anti-Semite. It can only be recorded that he was.

Glickman, the erstwhile track and field Olympian, passed away in 2001, while his teammate Stoller died in 1985.

Back in 1996, Lambert expressed that she had made peace with Germany:

"Even though I didn’t win a medal, I think I achieved a lot," said Lambert, who moved to the United States in 1937 and went on to win two national track and field championships.

After vowing years ago that she would never set foot in Germany again, Lambert, 82, is now attending the Atlanta Games as a guest of the German government.

"You can’t hate forever," she said, "and I feel this is some kind of a closure."