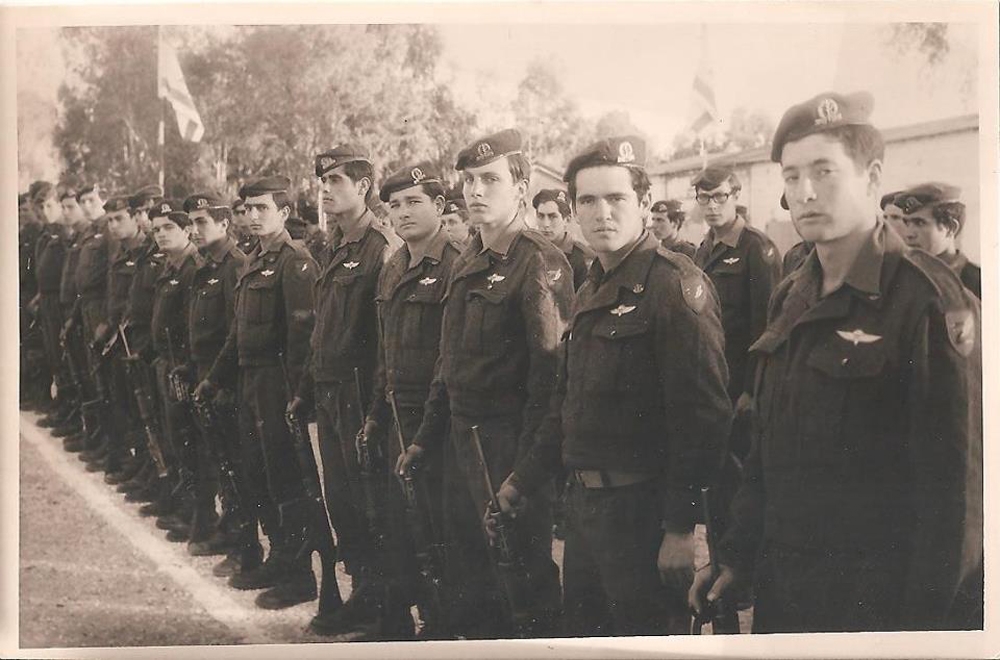 A fellow paratrooper said that Richard Magid, shown at far right in a 1972 ceremony inducting noncommissioned officers, "was really a top guy" to know during their Israeli military service. (Courtesy Shmuel Groberman)
Advertisement

BALTIMORE (JTA) – Rain fell, snow floated and temperatures plunged as Richard Magid rode his motorcycle back home to eastern Oregon after visiting his son in Corvallis, Ore., a few years ago. Magid might have pulled off the road to warm up had his Israeli paratrooper training not toughened him to the elements.

“I just kept it in gear and thought, ‘I can do this,’ ” Magid said Tuesday. “You’re wet and cold in the army, too. You get through it and realize that your physical limitations are only temporary.”

Now living back in his hometown of Berkeley, Calif., Magid said that his two years of service with the 3rd Platoon of Paratrooper Unit 890 made powerful impressions.

Planners of the platoon’s 40th anniversary reunion, set for Aug. 30 at a member’s home in the central Israel town of Yehud, had been seeking Magid, 62. “Seeking Kin” found him on Tuesday with an assist from Sue Fishkoff, editor of j., the Jewish news weekly of Northern California (and a former JTA writer), who knocked on Magid’s door when his telephone number proved to be outdated.

A dental hygienist who recently returned from a lengthy vacation, Magid likely won’t be able to attend the reunion. However, the platoon’s lone American member said he looks forward to calling his old Israeli friends. For their part, platoon mates expressed happiness at locating the soldier they knew as “Ricky,” who had impressed them as an extremely quiet, pleasant young man.

“We are delighted to find him,” said Yaakov Cohen, a Tel Aviv native who has lived the past three decades in Sydney, Australia, and will fly in for the event.“He deserved our exerting all efforts. He was a volunteer twice: He immigrated to Israel, and he volunteered for the paratroopers. On top of that, I have to say that his mannerisms [were notable]; even when things were tough, he never complained. He was a real, real gentleman. Rick Magid was really a top guy.”

Platoon members had figured, correctly, that Magid returned to America following his military service, but didn’t know his hometown. They remembered his being slightly older than they were, meaning that he probably had attended university pre-Israel — but they didn’t know what school.

Magid’s home base in Israel was listed as 17 Talpiot St. in Ramat Gan, which they assumed was a cousin’s address. It wasn’t a cousin who lived there but rather Moshe Ben-David. The two had met at a Young Judaea camp in Berkeley, and their discussions “inspired me to go to Israel,” Magid said.

After taking a few community college courses, Magid signed up for Young Judaea’s one-year program, which included classes in Jerusalem and stays on a kibbutz and moshav. He returned to Berkeley, then headed back to Israel to enlist in the army.

“I didn’t want to go to Vietnam,” he said. “I figured I should fight for my own people, for a cause I could believe in. It made more sense to me.”

At Sanur Base, situated between Jenin and Nablus, the three-platoon, 120-member unit began basic training on Nov. 3, 1970. The grueling experience caused a third of recruits to depart the 14-month course before completing its officers-training program. Soldiers in the 3rd Platoon  spent three months each at the Suez Canal and in the Jordan Valley and Gaza Strip. They also patrolled Israel’s border with Lebanon and held training exercises on the Golan Heights.

Cohen remembered a “days-long and really tough” 110-mile march from Mitzpe Ramon in the Negev to the southern port city of Eilat. During the hike, a Piper light aircraft released parachutes. Plastic bags tied to them contained chocolate milk containers and letters from home.

“It was unbelievable, something you never forget,” Cohen said. “It was a nice surprise for us.”

Magid, a father of four and grandfather of nine, recalled when he and the platoon had nearly entered Lebanon on a mission to build a road. But after waiting all night in rain and hail, commanders canceled the mission because of the poor conditions.

The 3rd Platoon would fight in the Yom Kippur War. Two members, David Indig and Yair Tzoref, fell in battle. Another two, Tzvi David (cancer) and Giora Sorek (suicide), have died in the years since. Their widows are invited to the reunion, where a moment of silence will be observed.

Magid says he regrets returning to America following his two-year military stint — as an older immigrant, he was discharged a year early, although he doesn’t remember asking to be — and missing the Yom Kippur War. He couldn’t get a flight to Israel until the fighting ended. When he landed, he bumped into a platoon mate, Avraham Sabach, a member of Ben-Gurion Airport’s security team. Magid would work as an El Al flight attendant for six months before settling in America for good. Since then he has not returned to Israel.

His Israel Defense Forces training “was the greatest experience I ever had,” Magid said. “It brought out my best attributes. It taught me a lot of lessons — that you can surpass physical limitations with your mental capabilities.”

The platoon’s Facebook page contains scores of members’ photographs, along with a booklet published during their service. One of its headlines called the 110-mile hike the longest in Israeli paratrooper history.

One post by Shmuel Groberman noted that Magid “almost always was sleeping,” making him easy to identify in the photographs. “We were always so tired,” wrote Groberman, an architect living in Jaffa.

By Wednesday, the list of 10 sought men whom platoon member Amikam Douieb had mentioned on the “Hamador L’chipus Krovim” (Searching for Relatives Bureau) radio program had been whittled to three. With Magid’s reemergence, only Sabach and Yaakov Tene remain at large.

“All the challenges over the years in the paratroopers were such strong and real character builders that any problems we faced were minute,” Steve Goldstein, a pharmacy owner who lives in Hod Hasharon, told “Seeking Kin.” A South Africa native, Goldstein had befriended Magid, whose Hebrew capabilities were poor.

“We laughed together, cried from exhaustion and pain, guarded each others’ backs in battle, and I’m sure and know that there exists a bond and a love between us that will return as soon as we meet again this summer,” Goldstein said of the platoon members.

“I can continue for hours writing about this special bunch. We lived with each other day in and day out, not seeing our families for months on end. This was our true family.”