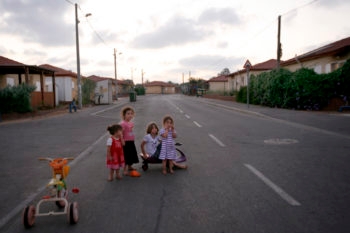 Children playing in Nitzan, a religious communal settlement in southern Israel, where many of the Gush Katif evacuees were relocated following the Gaza pullout. (Miriam Alster/Flash90 )

NITZAN, Israel (JTA) — From an overlooking road, the district of this desert town called Nitzan B seems like a unified mass of identical red-roofed single-family homes, reminiscent of a crowded American postwar Levittown.

“From far away it looks nice,” says Galit Kakon, a Nitzan B resident.

Like the rest of the district’s 600 families, Kakon used to live in Gush Katif, the bloc of Israeli settlements in the Gaza Strip that Israel evacuated seven years ago this week in an operation called “the disengagement.”

Nitzan B’s residents still self-segregate in the district according to the places where they once lived in Gaza — small agricultural settlements like Kakon’s Gan Or, or larger towns like Neve Dekalim. Many dream of an unlikely return to Gaza and the lives they were forced to leave.

Up close, Nitzan B, about 15 miles north of Gaza, looks like the temporary development it is, built as a transitional space to use immediately after the 2005 disengagement. The houses sit cramped along streets on barren land, with walls that Kakon says are so weak that they pose a security risk should Kassam rockets fall nearby.

By the end of this year, about 100 Nitzan B families are slated to move to a new, permanent development called Be’er Ganim. As with Nitzan B, Be’er Ganim is under the jurisdiction of the Ashkelon Coast Regional Council, the local government on which Nitzan B’s residents have come to rely.

But despite wishing for a return to better times, some of these Israelis, who once were considered the vanguard of Israel’s settler movement, no longer see themselves as part of the settler community. Although many still identify with the settler movement’s goals and philosophy, they have little day-to-day contact with them.

For the most part, the settler community in the West Bank does not view members of the Nitzah B community as fellow settlers. Nevertheless, the West Bank settlers sympathize with the evacuees and at least one nonprofit assists them. But mostly, as Kakon says, “Everyone is busy with their own.”

“There were efforts throughout this period to assist the people, but a particular campaign doesn’t exist,” said David Haivri, a spokesman for towns in the northern West Bank. He noted that West Bank settlers identify with Gush Katif evacuees in that the West Bank may someday be evacuated as well.

Despite having little contact with West Bank settlers and being spread across the country, former Gush Katif residents hold the same core beliefs as settlers, according to Hamutal Cohen of the Committee for Gush Katif, an advocacy group for the evacuees.

Some material assistance still flows from the West Bank to the Gaza evacuees through the nonprofit Christian Friends of Israeli Communities, a group dedicated to helping settlers. Since the disengagement, Sondra Oster Baras, the group’s director, says it has funneled more than $1 million to the Gush Katif communities.

“The question was, when they were thrown out of their homes, do we abandon them or continue to help them?” she said. “We’re not going to abandon them.”

Most of Nitzan B’s funding, though, comes from the Ashkelon Coast Regional Council, which in the past four years has spearheaded the development of Be’er Ganim, and dedicates $2.26 million annually to the evacuees. This budget pays for such services as social workers and youth activities, and funds the salaries of community leaders who represent the evacuated towns.

“The first two or three years we didn’t feel like part of the regional council,” said Kokon, who now works for the council and credits its head, Yair Forjoon, with embracing the evacuees after he began his term in 2007.

“He understood that we were people here,” she said. “The most important thing is to know you have someone to talk to. Yair was available with his phone, his email.”

Other Gush Katif evacuees traded one settlement for another following the disengagement. Rather than make their home near Gaza, as the Nitzan B communities did, these evacuees from Neve Dekalim moved to the West Bank settlement of Ariel, where they now live in a neighborhood of temporary houses. The evacuees sought a diverse city with large populations of religious, secular, native-born and immigrant Israelis, and found it in Ariel.

The city’s location “added a lot of points to the decision,” said Itzik Wazana, one of that city’s neighborhood leaders, but was not the deciding factor.

“There was an idea to do the opposite of disengagement, to engage, to bring education and culture here,” he said. “Our idea is not to stay in our own context but to share in the challenges of the city.”

Although Ariel went “above and beyond” in welcoming the evacuees, Wazana said that the evacuees do not now receive or ask for much assistance in trying to build their homes there.

“We take care of ourselves,” he said. “We don’t need special help. We’re like one big family. We work together, do things together.”

No matter where they are making their homes, several evacuees said their ultimate goal, however unrealistic at present, is to return to the settlements they left seven years ago.

“It’s clear to me that at some point we’ll go back,” Kakon said. “It’s not on the horizon. If not me, then my kids. If not them, then my grandkids. My house will always be in Gush Katif.”