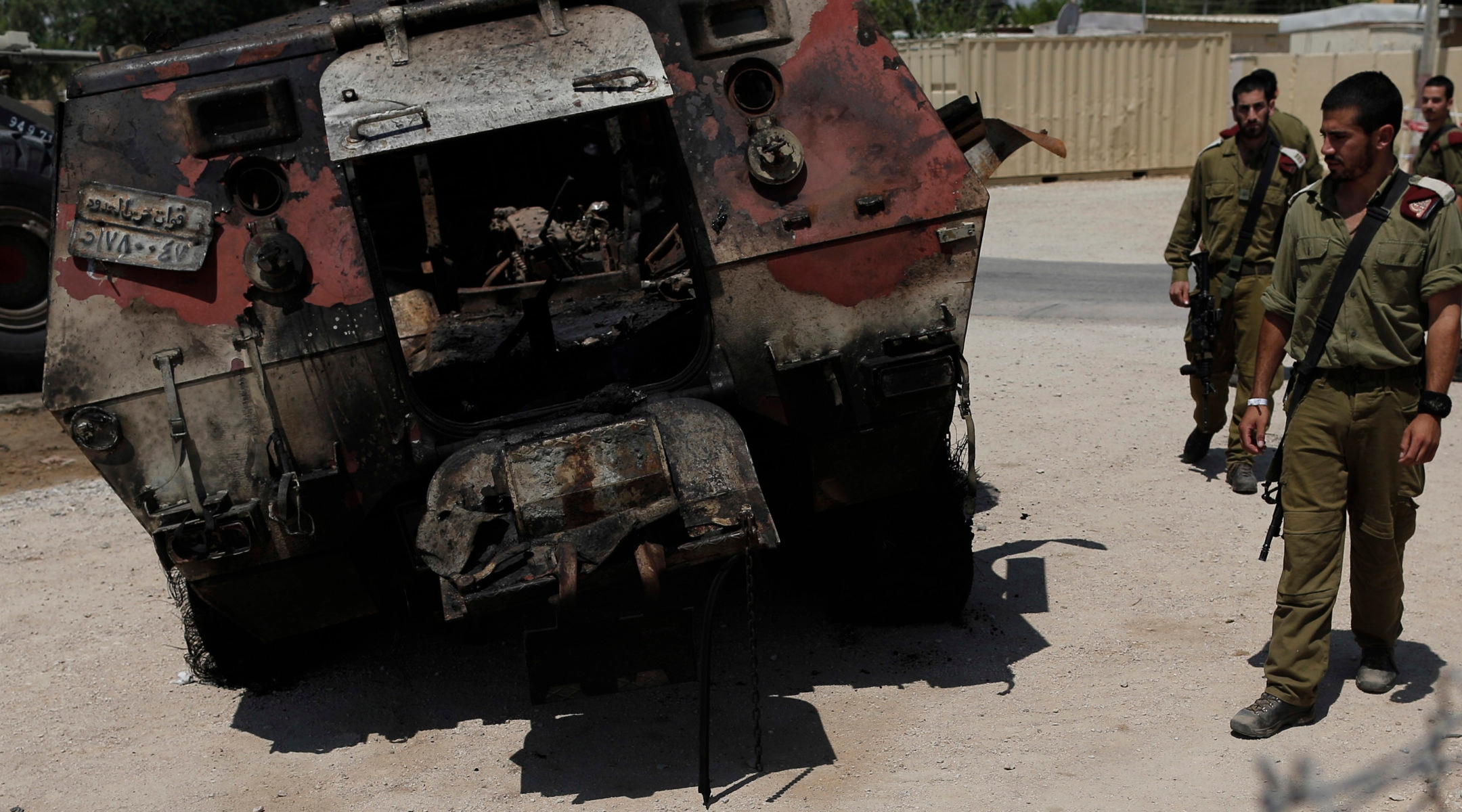 The wreckage of an Egyptian military vehicle after militants burst through a security fence into Israel at a military base along its Egyptian border, Aug. 6, 2012. (Tsafrir Abayov/Flash90)
Advertisement

JERUSALEM (JTA) – The attack this week along the Israel-Egypt border poses dilemmas both for Israel and for the new Egyptian president.

Should Israel accede to pressure to modify its 1979 peace treaty with Egypt and allow more Egyptian troops into the Sinai to quell the unrest there?

For Egyptian President Mohamed Morsi, who hails from the Muslim Brotherhood, will his crackdown on militancy in the Sinai be seen domestically as his offering a helping hand to Israel, a country much of his constituency still views as an implacable foe?

After the attack, Egypt’s Muslim Brotherhood and Gazan Prime Minister Ismail Haniyeh of Hamas, which is affiliated with the Brotherhood, blamed Israel’s Mossad intelligence agency for the attack. Hamas claimed it was an attempt to disrupt Morsi’s new Islamist government, and the Muslim Brotherhood reportedly called for a review of the Egypt-Israel peace treaty.

But it’s not clear that Morsi endorsed that statement; rather, he ordered the Egyptian army to take “control” of the Sinai.

Israeli defense and government officials are saying that Sunday’s attack — in which militants in the Sinai Peninsula killed at least 15 Egyptian soldiers before breaching the Israeli border and being stopped by deadly Israeli fire — is an important moment in the Israel-Egypt relationship.

As part of the 1979 peace treaty, Egypt agreed to leave the Sinai mostly demilitarized, with specific restrictions on the number of troops and type of weaponry allowed there. Israel agreed to ease those restrictions in January 2011 after protests against then-President Hosni Mubarak intensified and attacks began on the gas pipeline between Egypt and Israel.

Since Mubarak’s fall, the Sinai has become increasingly lawless, with multiple bombings of the Egypt-Israel gas pipeline before Egypt halted gas delivery earlier this year; stepped up smuggling between Egypt and Hamas-controlled Gaza; and terrorist attacks launched against Israel from the Sinai. African migrants from Sudan, Eritrea and elsewhere also have used the Sinai as a base for sneaking into Israel.

This week’s assault was the deadliest incident along the border since Mubarak’s fall, although an attack last summer left eight Israelis dead in Eilat. Aside from the Egyptian soldiers killed in Sunday’s attack at the Rafah security checkpoint, several Egyptian soldiers may have been kidnapped by the terrorists, according to reports. Barak identified the attackers as members of the Global Jihadi terrorist group.

After killing the Egyptians, attackers used two vehicles to cross the border into Israel at the Kerem Shalom checkpoint. Israeli helicopters responded, killing the terrorists. At least six were wearing suicide vests, according to the Israel Defense Forces. Israeli intelligence had information on the planned attack, enabling the military to have helicopters in the area to strike the terrorists, an IDF spokesman said Monday. Israel shared its intelligence with Egypt in advance of the attack, according to reports.

“I think that it is clear that Israel and Egypt have a common interest in maintaining a quiet border,” Israeli Prime Minister Benjamin Netanyahu said Monday while touring the site of Sunday’s attack. “However, as has been made clear on numerous occasions, when it comes to the security of the citizens of Israel, the State of Israel must and can rely only on itself.”

The border crossing was reopened on Tuesday.

Israel’s Foreign Ministry issued a condolence message to Egypt on the deaths of its troops. The message pointed out that the attack “aimed at shattering the peace agreement between Israel and Egypt.”

The message said, “Peace between the two countries has been, and still is, an interest common to both peoples; Israel will continue to act in a spirit of cooperation with Egypt in order to preserve this vital interest and ensure security and stability in the region.”

The attack came two days after Israeli authorities warned Israelis to return immediately from the Sinai, citing a terrorist threat.

“From information at our disposal, it arises that terrorist organizations in the Gaza Strip and additional elements are actively planning to perpetrate terrorist attacks, especially abductions, against Israeli tourists in Sinai in the immediate term,” said a warning issued by the National Security Council Counter-Terrorism Bureau.

The following day, the U.S. Embassy in Israel called on American citizens to “take precautions” in traveling to the Sinai. The embassy’s security message pointed out that there have been multiple kidnappings in the Sinai of U.S. citizens in the past four years, and that kidnappings of foreign tourists in the Sinai have increased since January.

In mid-June, terrorists infiltrated Israel from Egypt and killed an Israeli contractor in a border attack.

Israel began construction last year to complete its border fence with Egypt, both to halt the infiltration of illegal migrants and to prevent attacks. The fence will include barbed wire, cameras and motion detectors, and is set to be completed by the end of the year.

“There is no doubt that if they had entered a town here or an army base by surprise, they could have caused very serious damage,” Barak said Monday at the site of the attack. “This will not be the last time that we come across attempts to harm us.”