For Sheldon Adelson, political and Jewish giving are all of a piece 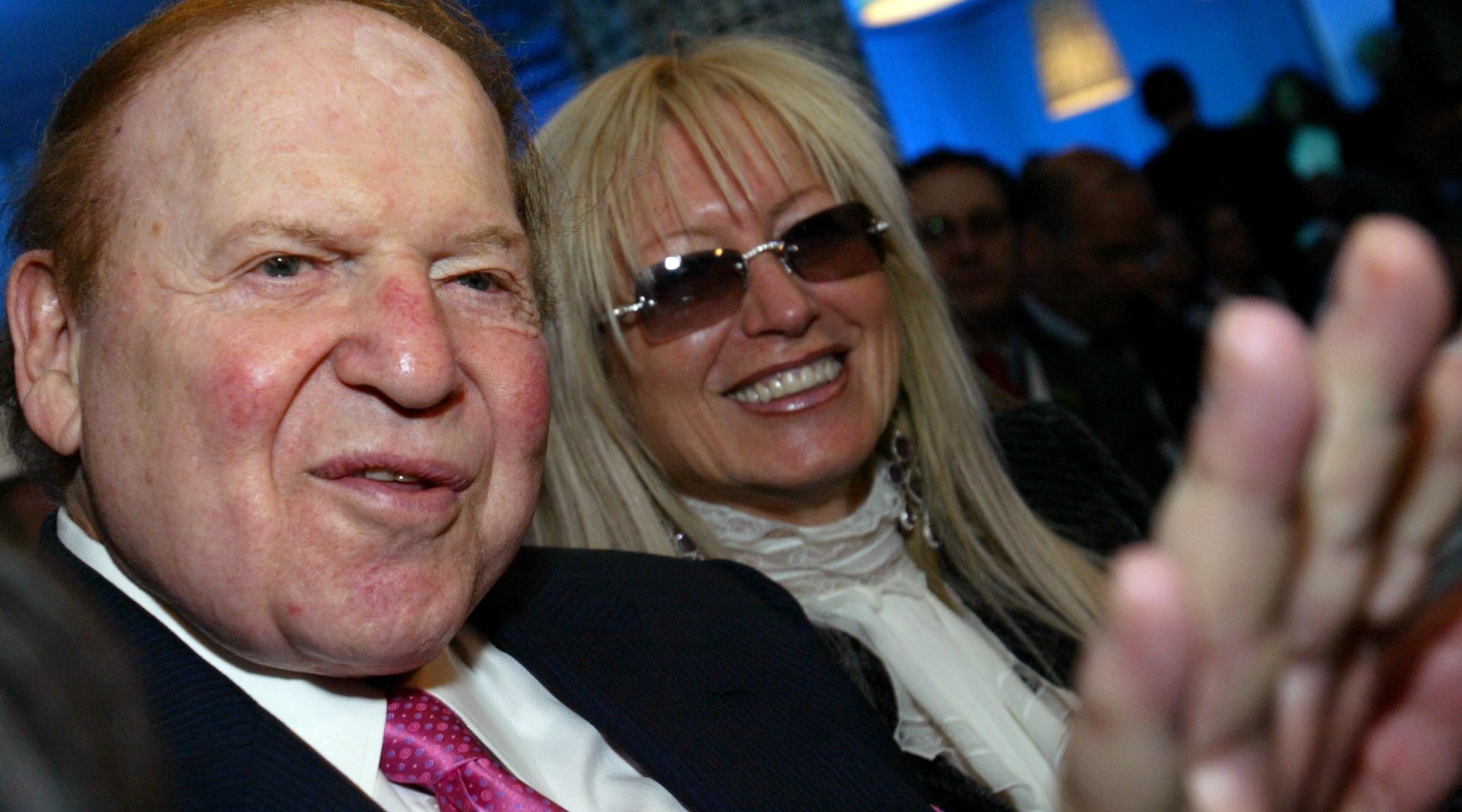 WASHINGTON (JTA) — Call it the Adelson conundrum: What happens when the guy who acts as if he owns the room really does?

In March at TribeFest, the annual gathering of young adults organized by the Jewish Federations of North America at the Venetian hotel in Las Vegas, Sheldon Adelson walked in on a surrogate debate between Matt Brooks, who directs the Republican Jewish Coalition, and his counterpart at the National Jewish Democratic Council, David A. Harris.

Adelson, who owns the Venetian, was the first to ask a question. He went on to berate Harris for six minutes, describing President Obama as a “crybaby” who should be in diapers, according to several people in the room, including an organizer.

The organizer, speaking on background, said the time Adelson used and his tone were luxuries that would not have been afforded anyone else. The difference, as the organizer said, is that Adelson “owned the room, literally.”

That same sense of entitlement could be driving the 79-year-old Adelson’s conversations with Mitt Romney, the presumptive Republican nominee for president.

This week, The Daily Beast/Newsweek reported that Adelson was pressing Romney to speak out publicly in favor of the release of convicted spy Jonathan Pollard, to commit to moving the U.S. Embassy in Israel to Jerusalem from Tel Aviv, and to declare the Palestinians as unwilling to make peace. Romney, the report said, is resisting.

Through political action committees, Adelson and his wife, Miriam, have funneled $10 million toward Romney’s election effort. Adelson has said he’s willing to spend up to $100 million to defeat Obama.

Those close to Adelson say politics are a small part of what makes him tick.

“He is passionately committed to Jewish life and living, and to Israel,” said Elliot Karp, the director of the Las Vegas Jewish Federation. “And he is no more or less polarizing than anyone else who gives his opinions.”

Adelson has given nearly $100 million to Birthright Israel, the program that brings Jews aged 18-26 to Israel for free. He revived the fortunes of the Yad Vashem Holocaust memorial in Jerusalem with a $25 million gift in 2006. From 2007-2009, he funded a $4.5 million strategic studies center in his name at the Shalem Center, a think tank in Jerusalem. His relatively smaller donations have helped bolster groups such as the Zionist Organization of America.

“The true story is that the amount of money he spends on politics is dwarfed by what he gives to philanthropy,” Brooks told JTA. “They are the single most important philanthropists in the Jewish community, in terms of Birthright, Yad Vashem and medical research,” he said of the Adelsons.

Adelson is the 15th richest man in the world, according to Forbes, with an estimated worth of $25 billion.

The confluence of Adelson’s three major interests — Jewish philanthropy, Republican politics and the casino business, which is how Adelson became one of the world’s richest men — has become one of the preeminent narratives of this election campaign.

New York Times columnist Thomas Friedman slammed Romney in a July 31 column for “abasing” himself before Adelson during a Jerusalem visit last week.

“Since the whole trip was not about learning anything but about how to satisfy the political whims of the right-wing, super pro-Bibi Netanyahu, American Jewish casino magnate Sheldon Adelson, why didn’t they just do the whole thing in Las Vegas?” Friedman wrote.

Some frustrated Jewish Democrats believe the Jewish community is unduly influenced by its single largest donor.

For his part, Adelson is unapologetic about using his money to influence policy.

“I’m against very wealthy people attempting to or influencing elections,” he told Forbes in February. “But as long as it’s doable I’m going to do it. Because I know that guys like Soros have been doing it for years, if not decades,” he said, referring to the left-wing financier George Soros, who also is Jewish.

Democrats scoff at the comparison, noting that Soros in this election cycle has pledged $2 million to help Obama’s re-election — one-50th of the amount that Adelson has said he’s willing to spend.

The admixture of Adelson’s politics and charitable giving is not new. In December, addressing a Chanukah gathering in Israel of hundreds of Birthright participants, Adelson championed Newt Gingrich after the then-Republican candidate for president said the Palestinians were an “invented people.” At the time, Adelson was the single biggest backer of Gingrich; he and his wife gave $16.5 million to the ex-House of Representatives speaker’s effort.

Birthright did not return a request for comment for this story.

In 2007, Adelson broke with the American Israel Public Affairs Committee over its support for a congressional letter calling for a massive increase in funding for the Palestinian Authority. Adelson previously had been one of AIPAC’s major backers, helping to fund its new Washington headquarters.

Fred Zeidman, a major Romney backer this election and the former chairman of the U.S. Holocaust Memorial Museum, said Adelson’s objections were par for the course for major donors.

“You don’t just write blank checks,” Zeidman said. “You don’t have to agree, but don’t ask him to give money to something he doesn’t believe in.”

He has a reputation as a nitpicker: The staff of Freedom’s Watch, which Adelson founded prior to the 2008 election to champion President George W. Bush’s Iraq War policies, said Adelson’s day-to-day micromanaging caused the organization to founder. Freedom’s Watch no longer exists.

And Adelson can also hold a grudge. He fired Shelley Berkley, his legislative director in the 1990s, over keeping the unions he reviles at the casinos. Berkley went on to become one of Israel’s most strident defenders in Congress and the Nevada Democrat is now running for the U.S. Senate, but Adelson’s opposition to her has not waned. He and his wife have maxed out donations to her opponent, incumbent Sen. Dean Heller, a Republican.

But Adelson can also be forgiving. Despite repeated clashes with the Las Vegas Jewish Federation in the past decade over what he perceived as its wastefulness, he is now its biggest donor, matching every new donation and every increase over the previous year’s donations.

“The Adelsons are front and center in the community,” said Karp, the federation director.

Adelson treats his Jewish beneficiaries like royalty, having them picked up at the airport in limousines and putting them up in luxury suites.

Adelson, who needs assistance in walking because of a nerve condition, peripheral neuropathy, affects a grandfatherly demeanor, complete with self-deprecation. When a Politico reporter at the Romney event in Jerusalem asked him why he was in town, he rejoined, “I came to get a shwarma sandwich, what do you mean?”

Miriam Adelson, an internist from Israel who specializes in drug addiction, is his second wife. He met her on a blind date in 1989, a year after he divorced his first wife, Sharon.

Adelson, a product of a working class family in Dorchester, Mass., who made his first fortune organizing computer trade shows, already was leaning right, but Miriam helped sharpen his views, particularly relating to her native Israel.

Associates say she dotes on him, snatching harmful foods from his hand.

“He tells her to go away, but he listens,” said ZOA President Morton Klein, adding that Adelson tells his friends he was determined to marry an Israeli the second time around.

In the 1990s, as he entered the casino business, Adelson established two friendships that have thrust him into the political storm: with Benjamin Netanyahu and Gingrich. Both friendships, notably, were forged in pro-Israel politics: Gingrich, defying both the Clinton and Yitzhak Rabin governments, had shepherded a law through Congress recognizing Jerusalem as Israel’s capital.

Zeidman says Adelson is a solid listener but knows when his mind is made up.

“He’s very strong willed,” Zeidman said. “He is truly blunt in terms of articulating his decisions once he’s made them.”