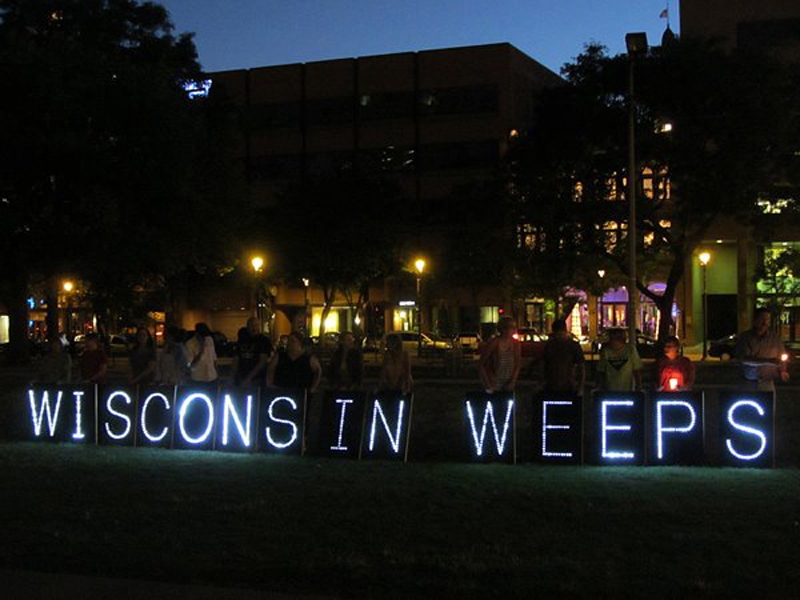 A candlelight vigil for the victims of the shooting at the Sikh temple in Oak Creek, Wisc., Aug 6, 2012. (Courtesy of Overpass Light Brigade)
Advertisement

(JTA) – Almost as soon as she heard the news about a deadly shooting at a Sikh temple near Milwaukee, Elana Kahn-Oren’s phone started ringing.

As director of the Jewish Community Relations Council at the Milwaukee Jewish Federation, Kahn-Oren fielded call after call from concerned area Jews asking what they could do to help.

“We have to make sure to be respectful of the Sikh community and to make sure that we find appropriate avenues to express that support,” Kahn-Oren told JTA.

A day after Sunday’s shooting, the federation was offering counseling services, had opened a mailbox to receive donations for assisting with the financial needs of the victims and their families, and was in talks with the Interfaith Conference of Greater Milwaukee to figure out a way to bring religious leaders together for an interfaith prayer service.

“Coming together after events like these reaffirms the values of the community,” Kahn-Oren said. “This goes against our moral fiber.”

The assailant killed six people, including the president of the Sikh Temple of Wisconsin, in Oak Creek, before being shot dead by police. On Monday, police identified the shooter as Wade M. Page, a U.S. Army veteran with ties to white supremacist groups.

Nationally, the Jewish Federations of North America’s Secure Community Network is communicating with Sikh and Muslim communities to advise them on enhancing awareness while maintaining openness, Paul Goldenberg, who directs SCN, told JTA.

Jacob Herber of Congregation Beth Israel said the Milwaukee synagogue’s weekday minyan would be holding a moment of silence to commemorate and express solidarity with the victims, just as the minyan does when Jews are attacked around the world.

“Unfortunately, because we have experienced through much of our history bigotry, hatred and anti-Semitism, this event is very acute for us in its pain,” Herber said. “That’s why I think we feel not only the obligation but the real personal, profound emotion of wanting to reach out to the Sikh community.”

Linda Holifield, executive director of Congregation Shalom in Milwaukee, said the shooter’s targeting of a place of worship was particularly upsetting.

Tom Heinen, executive director of the Interfaith Conference of Greater Milwaukee, said the tragedy has really hit home because of the tight-knit nature of the community in Milwaukee.

“Milwaukee is in many respects a large village where many people of many faiths are interconnected personally, professionally and socially,” he said. “At a time like this, we need to come together as a community to reassert our common values and to comfort those who have suffered grievous losses.”