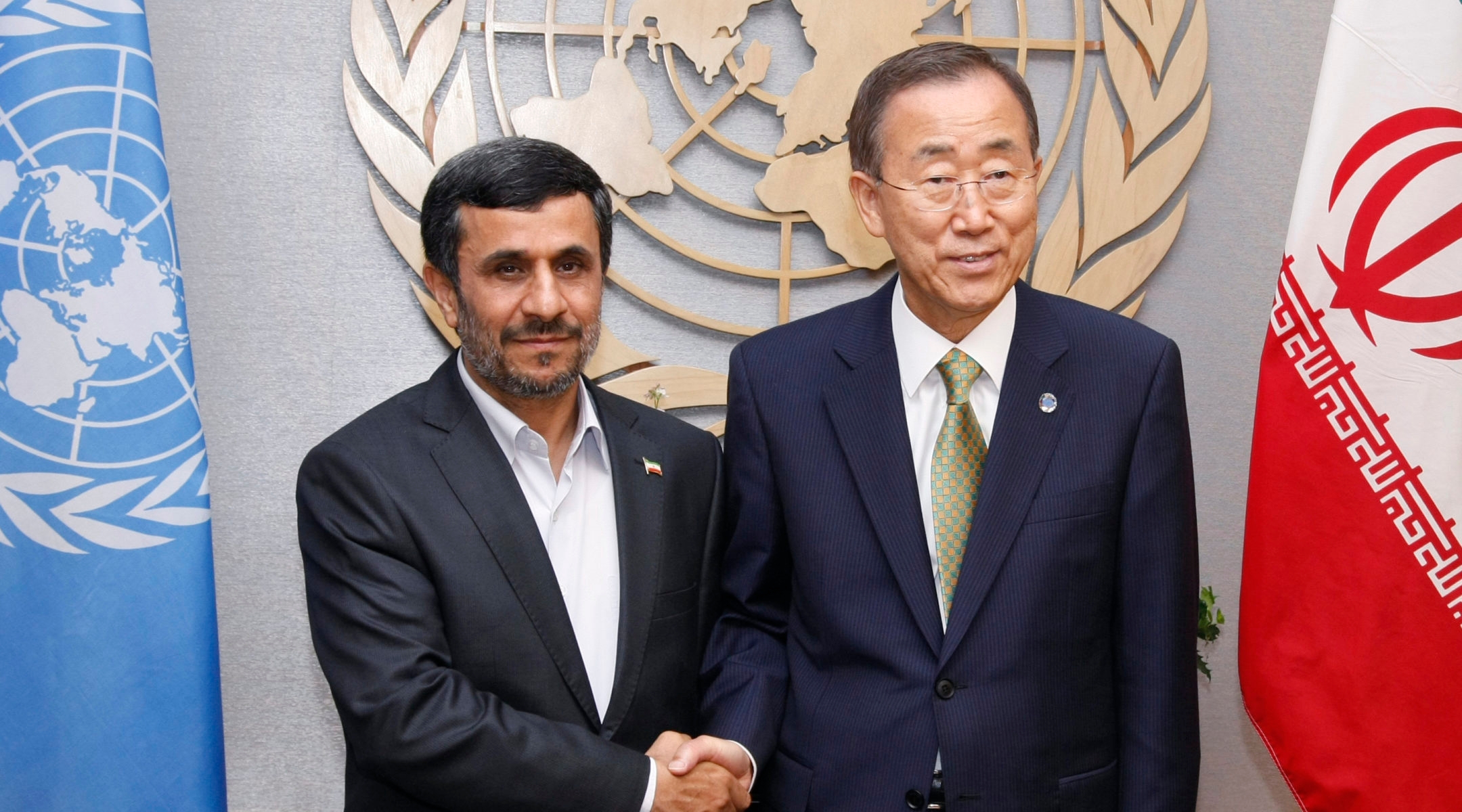 WASHINGTON (JTA) – As Iran gets set to host the Non-Aligned Movement triennial summit, Israel, the United States and a number of Jewish groups are worried that what happens in Tehran won’t stay there.

The decision Wednesday by Ban Ki-moon, the U.N. Secretary General, to attend the 16th triennial event from Aug. 29-31, has set off alarm bells in Washington and Jerusalem.

The U.S. State Department spokeswoman, Victoria Nuland, reiterated after Ban’s announcement “concerns that Iran is going to manipulate this opportunity and the attendees, to try to deflect attention from its own failings.”

U.S. Jewish groups that deal with the United Nations echoed that apprehension.

“For Iran the goal is quite clear,” David Harris, the director of the American Jewish Committee, who had released a web video urging Ban not to attend, told JTA. “Tell the United States and its friends not only are we not isolated, we are fully engaged. We are going to purport to speak on behalf of the non-aligned movement of 118 nations.

Israeli Prime Minister Benjamin Netanyahu on Aug. 12 urged Ban not to attend – and, in a rare diplomatic breach, made the plea public.

“Even if it is not your intention, your visit will grant legitimacy to a regime that is the greatest threat to world peace and security,” Netanyahu told Ban in the phone call, according to a statement from the prime minister’s office.

Israel and the West are locked in a diplomatic struggle with Iran to force the Islamic Republic to make more transparent a nuclear program it insists is peaceful but that Western intelligence agencies say is intended to produce a bomb.

The non-aligned summit sharpens tensions between Israel and western nations over whether diplomacy and sanctions have been played out; Netanyahu believes they have, and is pressing the Obama administration to make more specific the military consequences should Iran not comply. Obama administration officials are in turn pressing Israel to stand down from rhetoric that suggests an Israeli strike is imminent.

The non-aligned summit, planned long before the recent intensification of efforts to confront Iran, throws such tensions into the spotlight.

Which may seem odd, given the relative relevance – or lack of it  — of the movement.

The movement, a 1960s relic that once brought together nations seeking to resist cooption by either the United States or the Soviet Union, has struggled for definition since the end of the Cold War. With the summit, Iran assumes the rotating three-year presidency of it.

A measure of the movement’s declining significance – and of Iran’s isolation – is that just 30 leaders of about 120 member nations plan on attending the 16th triennial summit.

Still, expect the Iranian government to exploit the event for its symbolic value, said Alireza Nader, an analyst at the Rand Corporation, a think tank that often consults with the U.S. government.

“It’s a lot of posturing and photo-ops,” Nader said. “But the fact that Iran is hosting the summit and the fact that the U.N. Secretary General is going and especially that Egyptian President Mohamed Morsi is showing up are good public relations moves.”

The presence of Morsi, the Muslim Brotherhood leader recently elected president of Egypt, will likely be exploited by Iran as a signal that it is extending its influence in a region roiled by regime change, Nader said – although that would overstate the case.

“Iran has in recent months tried to boost relationships with Egypt, but Egyptians have been relatively standoffish. They haven’t embraced Iran, and that’s more important than whether a meeting will be held,” he said.

Already, Iranian officials were hyping the summit as a nexus for resistance to Western “hegemony.”

“In light of its focus on multilateral cooperation, disarmament, sustainable world peace, rights of nations and horizontal relations defying hegemonic structures, the Non-Aligned Movement is a major cross-regional group in the United Nations, and U.N. leaders have always participated in its summits,” Alireza Miryousefi, the Iranian envoy to the United Nations, wrote in an Aug. 21 letter to the Washington Post.

“By bringing dozens of world leaders together, the summit promises to make significant contributions to the movement’s lofty objectives.”

It is precisely the exploitation of such symbolism that concerns Jewish groups, said Michael Salberg, the director of international affairs for the Anti-Defamation League.

“Symbols matter, and when the symbol is represented by the secretary general of the United Nations it’s a neon light — and that makes it all the more troubling at a difficult time,” Salberg said.

The concern, said the AJC’s Harris, is that the gathering grants legitimacy to the Iranian leadership’s unvarnished and incessant anti-Semitism, as well as its oppression of its own people, its backing for terrorism and its role in the Syrian regime’s violent repression.

“The fact that an Iranian regime can support Syria’s barbarism before the world’s eyes, call for the annihilation of a U.N. member state and incite religious hatred and still be seen by some nations as a partner,” Harris said, “Does that validate Non Aligned Movement policies?”.

Nuland, the State Department spokeswoman, said that absent a boycott of the summit, reminding Iran of its obligations was the least it expected from those attending.

“We hope that those who have chosen to attend, including U.N. Secretary General Ban Ki-moon, will make very strong points to those Iranians that they meet about their international obligations, “ she said. “For them to begin to come clean on their nuclear program and to solve this particular issue diplomatically, and about all the other expectations that we all have of them.”

Ban suggested in his announcement that he got the message.

“With respect to the Islamic Republic of Iran, the Secretary-General will use the opportunity to convey the clear concerns and expectations of the international community on the issues for which cooperation and progress are urgent for both regional stability and the welfare of the Iranian people,” it said. “These include Iran’s nuclear program, terrorism, human rights and the crisis in Syria.”

Salberg said such caveats paled next to the symbolism of Ban’s participation.

“It says, you can act with impunity, you can say what you want and I’m still going to come, the embodiment of the international community,” he said.