Teaching Jewish history isn’t rocket science — or is it?

Ed. Note: Adapted from a presentation given at YouthCon 2012. Cross posted to JewPoint0, the Darim Online blog. 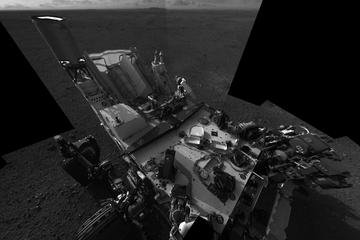 Can you guess what’s going on in this black and white photo?

It’s a self-portrait taken by a robot millions of miles away in the year 2012.

In 254 days, the Mars Curiosity rover made a whopping 354 million mile journey. When it landed on August 6, this robot transmitted live video of its arrival with a mere 14-minute tape delay for online audiences. (Comedians noted that the video coverage of the Olympics, which were being broadcast that same week from London to the United States, was provided on a 6-hour tape delay.) This photo, a composite of 20 images taken by Curiosity, was taken on August 8 and released by NASA on August 17.

With every new discovery about the red planet, NASA will share its findings via social media platforms like Twitter and Facebook. Like the recently defunct Space Shuttle missions before it, NASA is banking on these events — and the use of popular media to share them — to inspire future generations of scientists.

When do you suppose this next color photo is from? 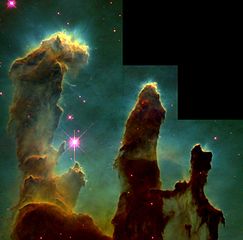 This photo of the Eagle nebula depicts the "Pillars of Creation" a collection of hydrogen gas and dust responsible for the birth of a myriad stars. It was snapped by the Hubble Telescope in 1995, but because the Eagle nebula is approximately 6,500 light years away, the events we see actually occurred more than six millennia ago. Although the content in this photo is thousands of years old, it is widely deemed one of the most breathtaking images of the known universe. Like the Mars Science Laboratory mission that launched Curiosity, photos like these can be shared to inspire the next generation of star-seekers.

"Digital breadcrumbs," a term coined by Jeff Pulver to describe multimedia clues about our present and past, exist across all disciplines.

Educators who teach the modern Jewish experience have several online resources at their disposal to visually enhance their curriculum. Whether from the Library of Congress, the Israel state photo archives or a search for creative commons images on Flickr or Wikimedia, images and videos of the not-too-distant past can make Jewish history come alive. Asking students to estimate the subject and time period depicted in these photos actively engages them in the scientific method and promotes inquiry based learning that can inspire independent research long after the bell rings. Depending on your particular classroom or school, teachers may even let students browse pre-approved collections of primary sources online in, say, a school computer lab. Local brick and mortar operations — Jewish genealogical and historical societies, public libraries and archives of jewish organizations– have both the materials and trained staff to facilitate the process of tracking down relevant materials. Library science programs incorporate advanced search methods, and teaching your students to think like librarians when they Google will serve them well for the rest of their classroom years.

Amazingly, the Eagle nebula’s "Pillars of Creation" reflect an ongoing story. In 2007, scientists found evidence that a supernova may have destroyed the iconic star generator. Alas, from our vantage point on Earth, we won’t be able to see that drama play out for thousands of years.

No matter what the future holds in store, educators should thank their lucky stars for the digital breadcrumbs of the past.

Adam Soclof writes and coordinates outreach for the JTA Digital Archive. Sign up for "This Week in Jewish History," JTA’s free Sunday email. Email Adam to arrange a presentation for your school or conference.