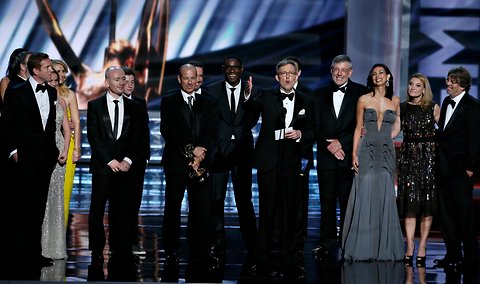 Last night’s 64th Primetime Emmy Awards revealed a new reality – the American viewer would much rather be scared by potential terrorists than sexist advertising agencies – as television show “Homeland” grabbed six Emmys and denounced “Mad Men” as the top drama on TV.

“Homeland” is based on the Israeli show “Hatufim” (Prisoners of War), and Gideon Raff, creator of the Israeli show, was part of the winning group for best writing. The Showtime show is entering its second season next week.

Jon Stewart and his “Daily Show” won the Emmys for Best Variety Series for the tenth time in a row. Yep, that’s 10 times. Even Stewart joked about it during his acceptance speech, saying, “Years from now when the earth is just a burning husk and aliens visit, they will find a box of these and they will know just how predictable these f—ing guys can be.”

Other Jewish nominees weren’t as successful – Lena Dunham did not win Outstanding Lead Actress in a Comedy Series for her role as Hannah Horvath on the HBO series “Girls.” The show also was nominated for Outstanding Comedy Series and was inspired by Dunham’s experiences as a Jewish young woman living in New York City.  Larry David did not win for his role as himself in the HBO series “Curb Your Enthusiasm,” which was also nominated for Outstanding Comedy and Mayim Bialik (“Big Bang Theory”) and Max Greenfield (“New Girl”) did not win the best supporting actress and actor in a comedy.