Making aliyah in their 80s, and just getting started 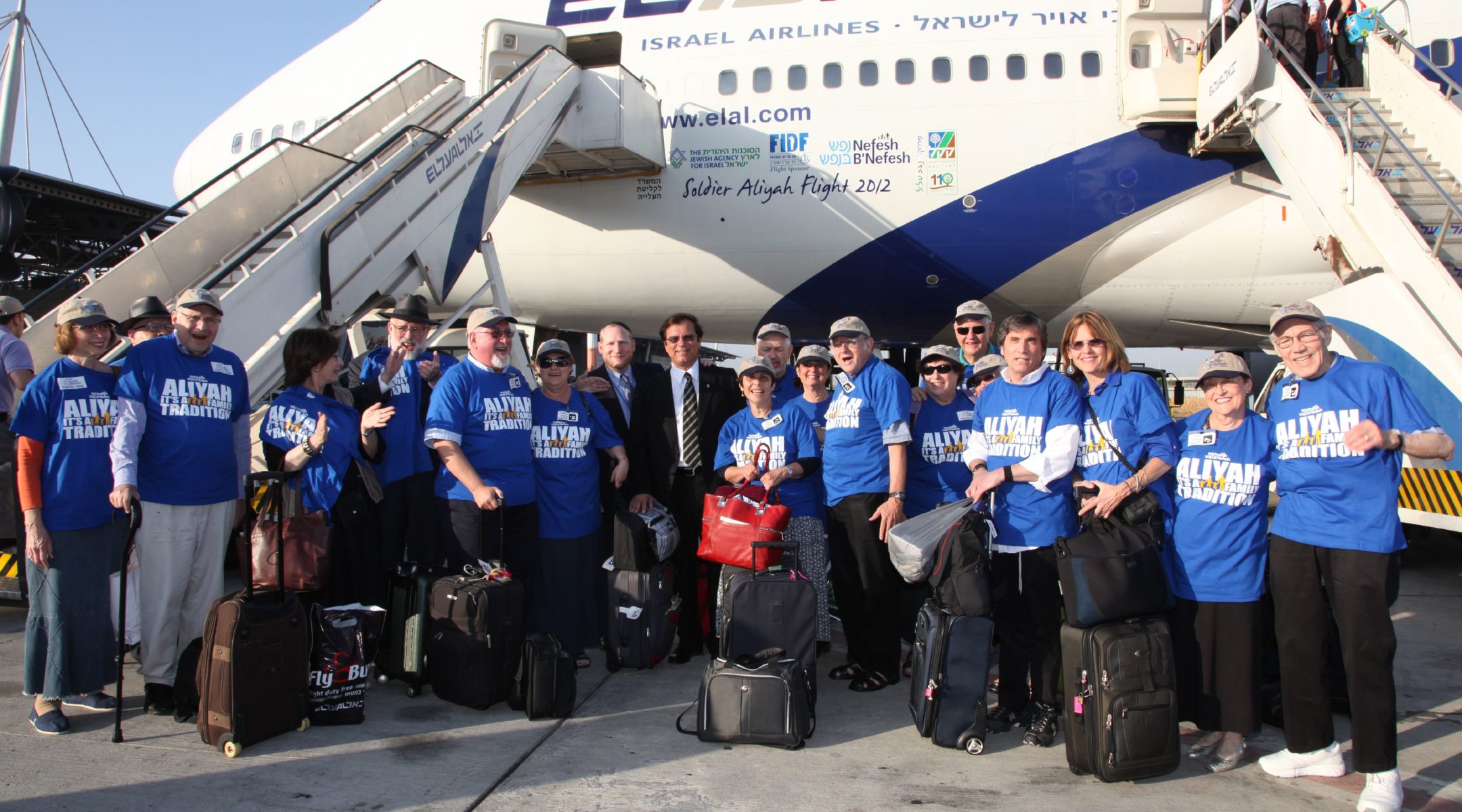 A group of retirees who made aliyah taking a photo shortly after landing in Israel with Rabbi Yehoshua Fass, center, co-founder of Nefesh B'Nefesh, and Effie Stenzler, right, the world chairman of KKL-JNF, August 2012. (Courtesy Nefesh B'Nefesh)
Advertisement

MODIIN, Israel (JTA) — Yakov and Moshet Pedagog’s living room, with its soft armchairs, air conditioning and panoramic view of central Israel’s hills, seems the perfect place for a couple in their 80s to exhale after long careers in education.

“We’re not planning to relax,” said the American-born Yakov, who immigrated to Israel with the aliyah organization Nefesh B’Nefesh in August with his wife of two years, moving to this Israeli city. As the former dean of a western Massachusetts community college, he and his wife, a physicist, hope to edit scientific papers jointly — all while learning Hebrew, staying active in the local Reform synagogue and working toward increased religious pluralism in Israel.

It would seem a tall order for Yakov, who in 1996 was living the American Jewish retiree’s dream: He and his first wife, who died seven years ago, had packed up their belongings in Massachusetts and moved to Boca Raton, Fla.

Pedagog had been active in Zionist groups such as the Zionist Organization of America since before the state’s founding, even participating in a clandestine meeting in “a smoke-filled room” in New York City with Abba Eban, the late Israeli ambassador to the United Nations.

Pedagog did not fly any of the planes, and his career kept him in the United States even as he remained passionately Zionistic. Then he met Moshet.

Soviet-born, at age 47, she had followed her son to America — although even at that time she wanted to make aliyah. “My motherly instincts won,” she said. “I said, ‘I don’t want to lose my son.’ ”

Growing up, Moshet says, her family was “proud of our Jewish heritage, singing Jewish and Yiddish songs, dancing Jewish dances, eating Jewish food. Many Jews were changing their names to Russify them, but I insisted that I am the daughter of Avraham,” her father’s given name.

An attempt at aliyah came when Moshet was a visiting scientist at the Weizmann Institute in the Tel Aviv suburb of Rehovot in 1985. She and her first husband, since deceased, decided to stay permanently, but then he returned to America for the High Holidays to work as a cantor.

At first, “he said he would come back for aliyah,” Moshet said. When he was slated to return, Moshet asked him, “ ‘When are you coming?’ And he said, ‘When are you coming [back to America]? I’m not coming.’ A second immigration was too much for him.”

More than 20 years later, Yakov, then living in Boca Raton, and Moshet, who was in Connecticut, met through the most modern of means: JDate. After a couple of trips up and down the East Coast, they decided to marry. The decision to make aliyah came soon afterward.

“When we met and got married we realized how we both felt about Israel,” Yakov said. “I said, ‘If not now, when?’”

They decided on Modiin after a November pilot trip. Yakov, who had become acquainted with Rabbi Nir Barkin of Yozma, Modiin’s Reform synagogue, when Barkin traveled to Boca Raton, is excited to become involved in the congregation now that he and Moshet are here. He also plans to advocate for religious pluralism initiatives championed by Israel’s Reform movement, such as the right of women to wear prayer shawls at the Western Wall.

“The future of Israel depends upon being able ultimately to really have a society that respects all people, that is an egalitarian society, which it obviously is not now,” Yakov said.

Although optimism fills the Pedagogs as they build a new life here, they differ from many elderly immigrants in that all of their children and grandchildren remain in the United States.

“You can’t come here as an older person without a support system,” said Harold Levine, 87, who made aliyah in 2009 and has two children here. “There are so many things you have to learn how to do.”

The Pedagogs are making do without such a support system by keeping busy. They still have to learn Hebrew, unpack their cardboard boxes and become accustomed to Israel’s banks and health care system, which Moshet says is “reminiscent of what was in Russia.” Yet the couple do not anticipate a difficult time here.

As a senior couple moving to Israel, they will receive more than $7,000 from the Israeli government divided into installments, in addition to discounts on services such as transportation.

Not all of their children and grandchildren are happy about the move. Yakov said his daughter “has accepted it,” while Moshet said that her children recognize her right to decide where she wants to live, even if it’s an ocean away.

“They think I’m a big girl, I know what I’m doing,” she said. “They know me as an outgoing person, a go-getter. It doesn’t occur to them to be happy or unhappy. Thus they accept that I’m entitled to make my decisions.