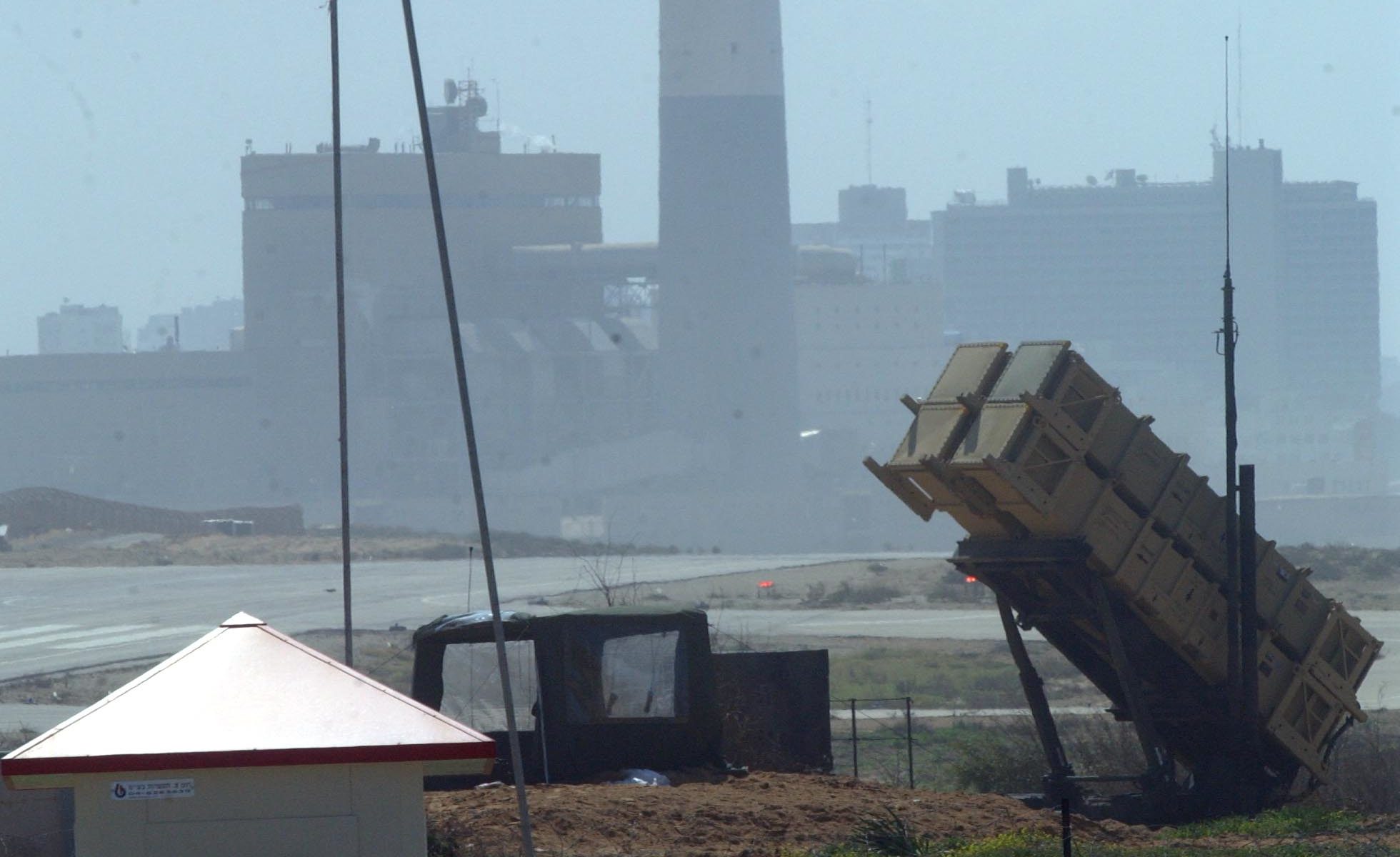 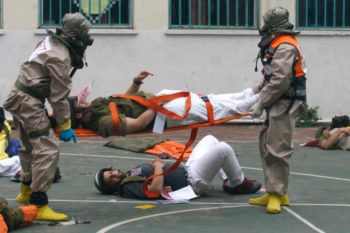 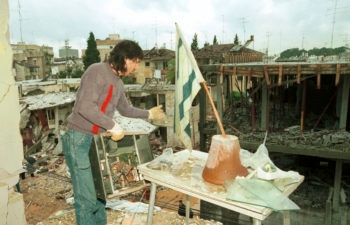 Ruins of houses in Ramat Gan, near Tel Aviv, caused by a Scud missile attack during the first Gulf War, Jan. 25, 1991. Nati Shohat/Flash90 ()

TEL AVIV (JTA) — On the seventh day of the Gulf War in January 1991, a Scud missile eluded American defenses and struck between two apartment buildings on Abba Hillel Street in Ramat Gan, a city that abuts Tel Aviv.

The missile, part of Saddam Hussein’s revenge for U.S. Operation Desert Storm, killed one woman and was one of many Scuds to hit Israel during the war.

Although Tel Aviv was a prime target for Palestinian suicide bombers in the 1990s and during the second intifada a decade ago, 1991 was the last time the city experienced missile attacks. Since 2006 it has gone through far less fighting than Israel’s northern and southern regions, which are adjacent, respectively, to the Lebanon and Gaza borders.

But Tel Aviv’s tranquility is not expected to last should war break out with Iran.

Iran and its proxy terrorist group, Hezbollah, now have missiles — Shababs and Fatah-110s — that can hit Israel’s largest metropolis. In a sign of Hezbollah strength, the group managed to fly a drone, financed by Iran, 35 miles into Israel on Oct. 6 before Israeli forces shot it down.

To prepare for the possibility of war, Tel Aviv has outfitted several mass underground parking lots to serve as bomb shelters. The city has about 350 shelters totaling more than 10 million square feet – enough to shelter about a million people. More than 400,000 people live in Tel Aviv, according to 2010 figures, with more than 3 million in its metropolitan area.

Tel Aviv’s Ichilov Hospital, like Rambam Hospital in Haifa, can mobilize an underground facility with 1,000 beds in the event of a war.

David Aharony, director of Tel Aviv’s emergency and security department, touts his city’s “daily preparedness all year.” Residents can look up bomb shelters on an interactive map provided by the municipality, and a recent citywide mailing advised residents about the shelter closest to their home. Some could require more than 10 minutes of walking, but Aharony says that’s good enough.

“In instances of war, in some situations you need to go to the safest place possible and then in later situations go to safer places,” he said. “In later stages, if someone wants to go to a bomb shelter, he will be able to find it.”

Israel also has been preparing for a potential attack since April by distributing gas masks to its citizens, with 40,000 new gas mask kits going out every month. Israelis first received gas masks to guard against chemical attacks during the ’91 Gulf War. Now the state has renewed distribution to guard against potential chemical attacks by Hezbollah, which could acquire the bombs from an unstable Syria or Iran. According to the Israeli military, slightly more than half of Israelis own gas masks.

Otherwise, Aharony said, the city will try to operate on its normal routine even during war.

Public transit is planned to continue as usual, excluding the immediate areas around missile explosions. Service may be less frequent than on a normal day, as the Israel Defense Forces will use some public buses to transport soldiers, but Transportation Ministry adviser Michal Kala predicts that fewer people will be traveling because “people aren’t going to wait at a bus stop when a missile could hit them.”

While Aharony said the municipality would wait until war’s end to repair any major damage to the electrical grid, the municipality will set up 30 spots around Tel Aviv where residents can access running water from reservoirs should the city’s plumbing system be damaged.

But Tel Aviv and Israel as a whole also place significant responsibility on citizens to prepare themselves for conflict. The IDF’s Home Front Command recommends that residents buy flashlights, radios, bottled water and a fire extinguisher to take with them in case of evacuation.

The millions of tourists who visit Tel Aviv each year can’t make those preparations. Aharony said the municipality will treat tourists “like any other resident in any way.”

Officially, the task of keeping tourists safe falls to the hotels and Israel’s Tourism Ministry, which in wartime attempts to evacuate foreign nationals to their home countries.

While the U.S. Embassy in Tel Aviv “does not foresee any call for an evacuation” in the near future, embassy spokesman Geoff Anisman said the embassy would contact Americans via text message and email in the event of a war.

Should evacuation be impossible, hotels have been asked to provide for guests and, if necessary, to serve as gathering spots for other tourists. Tel Aviv’s Dan Panorama has enough bomb shelters to hold all of its guests, and says it has enough food and water — and ways to obtain more — for an indefinite period of time.

The main challenge for Tel Aviv in the event of war would be psychological, said Eyal Zisser of Tel Aviv University’s Moshe Dayan Center for Middle East and African Studies. The city is referred to derisively as “the bubble,” and Israelis outside Tel Aviv often stereotype its residents as detached from the state’s security challenges.

Should war reach Tel Aviv, “there won’t be a lot of killing, but the question is whether the public will live with it” psychologically, Zisser said. “They haven’t been attacked. They haven’t experienced it.”

Reflecting that attitude, some shopkeepers on King George Street, a central artery in Tel Aviv, said they plan to keep their shops open even during a war.

“The government will take care,” said Matti Bismanovsky, who has run the Kef Li office supply store here for 30 years. “I’m not worried.”

But Ricky Danon, owner of the Bella Vintage clothing store, said that any war will feel immediate.

“I’m scared to death of war,” she said. “I don’t think I’ll sell clothes during a war. It’s disgusting to sell clothes when boys are dying. I’ll hide under my pillow and pray for it to end.”

Tel Avivis have been some of the most vocal opponents of a preemptive Israeli strike against Iran. In mid-August, hundreds gathered in front of the Tel Aviv apartment of Israeli Defense Minister Ehud Barak to protest a potential Israeli attack. Speaking at the rally, former Tel Aviv mayoral candidate Dov Khenin, a member of the Arab-Jewish Knesset party Hadash, said a strike on Iran would be “a terrible, horrible tragedy.”

Danon said that while many Israelis might imagine Tel Aviv residents relaxing as conflict looms, they are just as immersed in the country’s debates as any other Israelis.

“It’s not a bubble,” she said of Tel Aviv. “There are a lot of cafes here, but it’s only architecture. It looks like people don’t care, but they care. Everyone cares.”