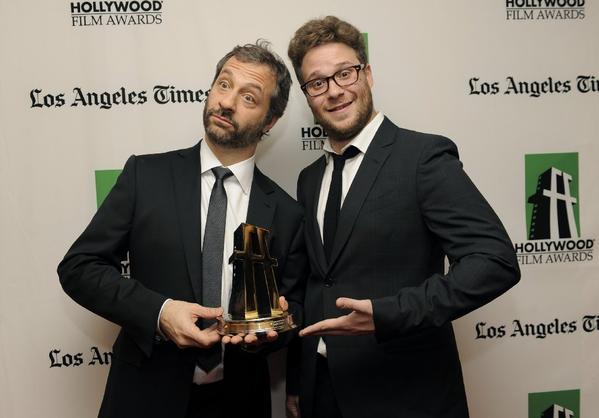 I mean, it’s late October and the Oscars and Golden Globes are not for months, but someone needs a reason to dress up, right?

Enter Monday’s 16th annual Hollywood Film Awards, perhaps the only award show that gives awards to movies that hasn’t been finished yet.

Here are some of his remarks:

“This is the first stop of the awards season. Or if you work in comedy, it’s known as the last stop of the awards season. This is it. This is all. We’ll lose to a musical at the Golden Globes. We all know that will happen. Les Mis just f—ed us all. The funniest movie of all time could come out and Les Mis will still win. It doesn’t matter. This is it. So you better enjoy it. People in comedy do wonder why we don’t get more awards recognition for our work. We think maybe it’s because we make it look so easy. It could be our gross overuse of the word scrotum. That could have something to do with it. But I think everyone knows the truth. It’s ugly and hard to admit but I’m going to say it — Hollywood hates Jewish people.”

Rogen continued with his rant:

“Perhaps the most amazing thing about this award show tonight is that none of these movies have come out yet. I think Quentin is still shooting Django if I’m not mistaken. I’ve never even heard of some of these movies yet. That’s how far out they are. They don’t even have trailers. What’s Rust and Bone? I don’t know what Rust and Bone is but apparently it’s amazing. That Chris Pine animated movie is still being animated. Katzenberg just rewrote the whole ending I heard.

Which brings me to my next question. Who voted for these things? I was told someone named Carlos or something like that. I picture Carlos the Jackal because all I know is his name is Carlos. It’s nice because it kind of feels like these are the new Golden Globes. Right? No one knows what it is. I don’t even get how they’re giving out these comedy awards. Zach Galifianakis won last year. He and Judd don’t even have the same job. Literally, they don’t do the same thing. All you need to do to win is have an amazing beard. That’s what I’ve learned.”

And finally he introduced Judd Apatow, who was honored with the Hollywood Comedy Award, with these comments:

But in all seriousness, it’s great that Judd is getting some recognition. He’s an incredible director. He’s not as good as Ben Affleck. I’m just going to say that. Ben Affleck is way better. [If Judd had] directed Argo, it would have been very unsuspenseful and I would have been in it. So let’s all take a walk down memory lane or into the future. I don’t know — they might show stuff from his new movie. Don’t get caught doping or they will strip you of this award in the future.”

Rogen has a point here. Also, as a true South Park fan I am truly against comedy awards (check the “Funnybot” episode) because it defies the purpose of comedy if you are series about it.

So is yet another award show worth it just for Rogen’s jokes?