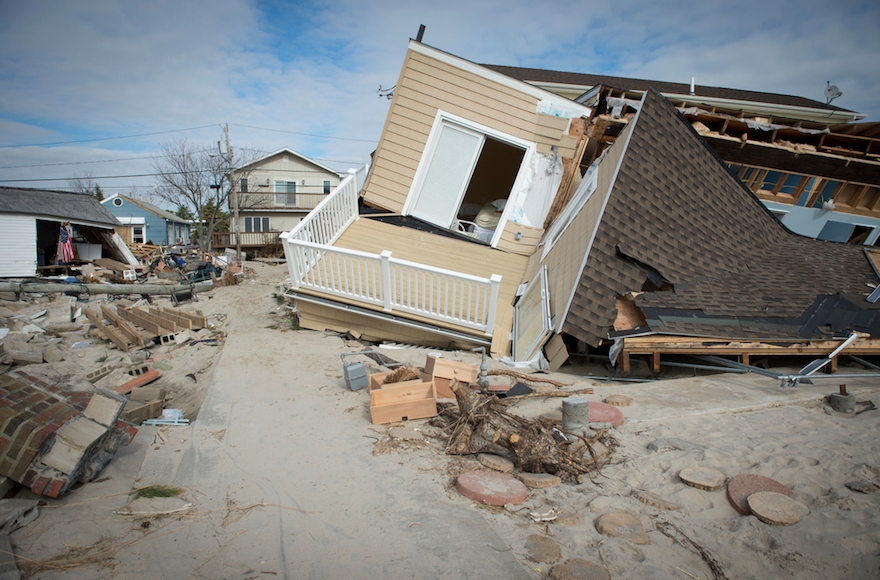 NEW YORK (Nov. 14, 2012) In the wake of Hurricane Sandy debris and destruction can be seen in and around the houses in Breezy Point, N.Y. Over 100 houses burned to the ground as floodwaters isolated the community from fireman. Hurricane Sandy was the largest Atlantic hurricane on record and caused the most damage in New York and New Jersey Oct. 29, 2012. (U.S. Navy photo by Chief Mass Communication Specialist Ryan J. Courtade/Released)
Advertisement

NEW YORK (JTA) — Less than a year into her job at North Shore Synagogue in Syosset, N.Y., Rabbi Debbie Bravo sounded remarkably poised as she and her community face one of their most powerful challenges together: Hurricane Sandy.

Bravo’s land line was dead. When she picked up her cell phone Tuesday, she had just returned from the local police station.

“I have a child who takes medication that has to be refrigerated,” she said calmly.

According to figures released by The Long Island Power Authority on Tuesday, more than 930,000 families — 90 percent of all island residents — are without power after Hurricane Sandy wrought havoc Monday night across the northeastern United States. Among those 930,000 are an estimated 139,000 Jewish househoolds.

Hurricane Sandy, which washed ashore Monday evening just south of Atlantic City, N.J., took dead aim at the most populous region of the country, home as well to the majority of the country’s Jews. In its wake, it left a trail of devastation that may take weeks to restore, if not longer.

“I went over to the synagogue a few hours ago, which is right next to a woodsy area,” Bravo said. “Ten plus trees are down, including a huge one down on the front law. Everyone’s saying this is a hundred times worse” than previous natural disasters that hit the island.

Early Tuesday afternoon, David Weisberg, executive director of the 120-year-old Isabella Freedman Retreat Center in Falls Village, Conn., posted a photo of a tree that literally sliced through the roof over the center’s main building.

“We’re looking in the short term how to work around that space and need to assess how long it will take to get that space repaired,” Weisberg said.

“It’s an amazingly precise cut,” he marvelled. “It fell at an angle perfectly perpendicular to the building, which will hopefully make the repair an easier one.”

Jewish communal organizations, whose offices, landlines and in some cases e-mail servers were closed or down on Tuesday, largely set up shop remotely as they set out to formulate a response.

Daroff noted that while watching the devastation unfold, social media was a source of comfort. “Compared to visuals from New York and the Long Island coast, having a support structure and literally thousands of friends acquired through Facebook and Twitter helped me feel less alone as my family sat shuttering with gusts of wind at 50 mph.”

For those without power on Long Island, finding alternative to landlines was critical.

“A lot of people are not getting cell phone service at home,” Bravo said. “For one congregant, the only time i could talk to her was when she left her house.”

As Bravo attempts to establish and maintain contact with the elderly and other congregants — including two with recent births — she also pondered the next moves for her synagogue’s two b’nai mizvah this weekend, which in all likelihood will be conducted without power.

“Truthfully in my mind, our options are try to use daylight,” she said.