Seeking Kin: The girl in the white dress 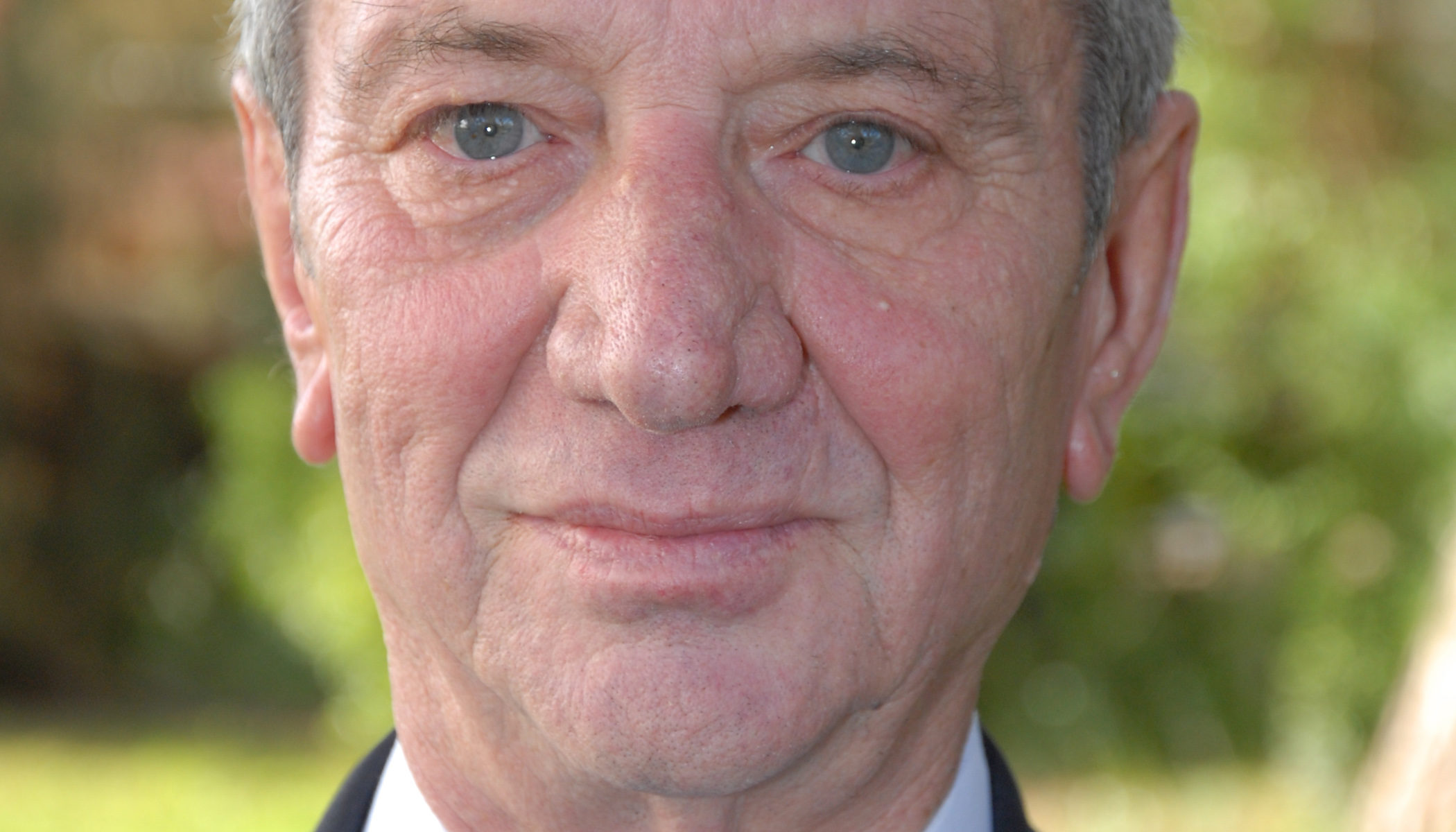 Eliezer Sheffer, now a 79-year-old great-grandfather, fondly recalls the little girl to whom he gave a ride home just after the Six-Day War ended. (Courtesy of Eliezer Sheffer)
Advertisement 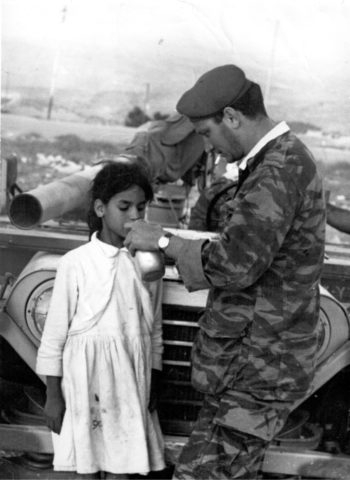 BALTIMORE (JTA) — For Eliezer Sheffer, serving as a sergeant in a paratrooper reserve unit during the Six-Day War remains an indelible memory. A bomb sapper, he fought in a battle that helped unite Jerusalem under Israeli rule and participated hours later in Mincha prayers on the Temple Mount — and for both experiences, Sheffer, an observant man, expresses pride to this day.

Yet another powerful association the now 79-year-old Jerusalemite carries from the war occurred after combat had ceased and he was heading home, when Sheffer crossed paths with a little girl named Basima Shafiq.

Their meeting would lead to a brief friendship with the girl’s Muslim family. Then, as life inevitably does, the connection gradually flitted, and it would drift from Sheffer’s mind in the ensuing decades.

But seeing a photograph last year that he hadn’t known existed rekindled Sheffer’s thoughts about the long-ago encounter and prompted him to wonder what’s become of the now middle-aged Basima. He has since searched for her, to no avail.

“I’d like to see her and to hear what her life has been like,” said Sheffer, a retired career guidance counselor for Israel’s Labor Ministry who lives in the capital’s Musrara neighborhood. “She made such an impression on me.”

For Sheffer, friendly relations with Muslims have always come naturally. Growing up in the then mixed city of Tiberias impressed upon him the value of good neighborliness. Sheffer’s father, a Karlin Hasid, had a Muslim business partner, and mutual visits by the families on their respective holidays were common. When Sheffer lived in Jerusalem’s Old City, he frequently gave his house key to a grocery store owner-friend named Muhammad for safekeeping.

“It’s part of my world view,” Sheffer, now a great-grandfather, said by telephone earlier this week.

The Jewish soldier and the Muslim child first met four days after Sheffer and his cohort from the 55th brigade, 28th battalion, were sent north following the Jerusalem battle to join the fighting on the Golan Heights. But when they got there, the war had ended. Three days later, they piled into a military truck to head back south.

Near Jericho, in a region that days earlier had belonged to Jordan, the truck passed Arab residents streaming home on foot after having fled the fighting. One person stood out: Basima, approximately 9 years old and wearing a white dress. Her water bottle was empty, and Sheffer offered her a drink.

Rather than guzzle the proffered water, Basima first washed her face with it before taking a sip. She asked another soldier for a comb and straightened her hair. Sheffer and his fellow soldiers offered Basima a ride back to her Jerusalem home.

During the drive, the Israeli soldiers — some natives of Iraq and other Arabic-speaking countries — chatted with the girl. Basima related that she and her uncle had sought to escape the war by heading for the east bank of the Jordan River. The two had reached the bridge near Jericho that spanned the narrow river but discovered that the structure had been destroyed in the fighting. While others reversed course, Basima’s uncle started across the shallow water. The girl hesitated and turned back with others. Her uncle continued to Jordan.

Once the military vehicle reached Basima’s home in Jerusalem’s Abu Tor neighborhood, close to the Augusta Victoria Hospital — scene of a pivotal battle on Jerusalem’s northeast slope days earlier — Sheffer hopped down and escorted her to the door. The girl’s parents hadn’t known the war was over and were concerned about the Israeli soldiers outside.

Eventually, the door opened, and Basima’s parents — her father was Ibrahim, but Sheffer does not recall the mother’s name — soon brought out fruit and coffee. Sheffer and his friend from the unit, Nissim Levy, sat at their table. Hosts and guests spoke for a while, then the soldiers returned to their homes and their civilian lives.

In the following weeks and years, Sheffer sometimes brought his wife, Esther, and their three children to visit the Shafiqs in Abu Tor. In July 1967, Sheffer’s friend, Zevulun Hammer, who would become a minister in several Israeli governments, came along, intrigued by the story of how the soldier and child had met.

In the 1970s, Sheffer ran into one of Basima’s brothers in Jerusalem’s Old City. The man told Sheffer that Basima had gotten married and moved to Kuwait.

That’s the last he heard of her until 2011. That was when Sheffer’s daughter, Smadar, mentioned that a friend had just found a photograph showing Sheffer giving Basima the canteen back in June 1967. The friend’s father, Aharon Zukerman, was a freelance news photographer and had taken the picture.

Small world, Sheffer thought. He set out to locate Basima.

Sheffer drove to the Abu Tor home but found that the block had been razed and rebuilt. He showed the Zukerman photograph to area residents and to Augusta Victoria employees. No one recognized the image or the names he mentioned. Sheffer also was interviewed on the Israeli radio program “Hamador L’chipus Krovim” (Searching for Relatives Bureau).

Speaking with JTA, Sheffer said that he was most impressed by Basima’s precocious self-assuredness in having turned back at the bridge and begun walking home alone, and by the dignity she exhibited in primping her face before drinking from his canteen.

“It was her behavior: It made an impression. This was a girl who was smart, who was ladylike, who had a nobility about her,” he said. “She was like a princess.”

Sheffer said that the friendship he enjoyed with Basima’s family, while short, should be the norm.

“For Jews in a sovereign Jewish state, the relationship with minorities must be just, moral and honorable. It’s a religious value — and I can prove it from rabbinical sources,” said Sheffer, who serves as chairman of the World Organization of Orthodox Communities and Synagogues in Israel and the Diaspora, which is based in Jerusalem’s Great Synagogue.

Israel’s ambassador to the United States, Michael Oren, said in an interview Tuesday that in researching his 2002 book “Six Days of War: June 1967 and the Making of the Modern Middle East,” he had not come across stories akin to this cross-national, let alone cross-generational, tale of friendship.

“It shows that divisions can be crossed — that the reuniting of Jerusalem wasn’t just a physical one, but a personal one as well,” Oren said. “Interpersonal relationships, friendships, between Israelis and Palestinians are only a positive thing and they can contribute to peace.”

Please email Hillel Kuttler at seekingkin@jta.org if you know of Basima’s whereabouts. If you would like “Seeking Kin” to write about your search for long-lost relatives and friends, please include the principal facts and your contact information in a brief email. “Seeking Kin” is sponsored by Bryna Shuchat and Joshua Landes and family in loving memory of their mother and grandmother, Miriam Shuchat, a lifelong uniter of the Jewish people.)