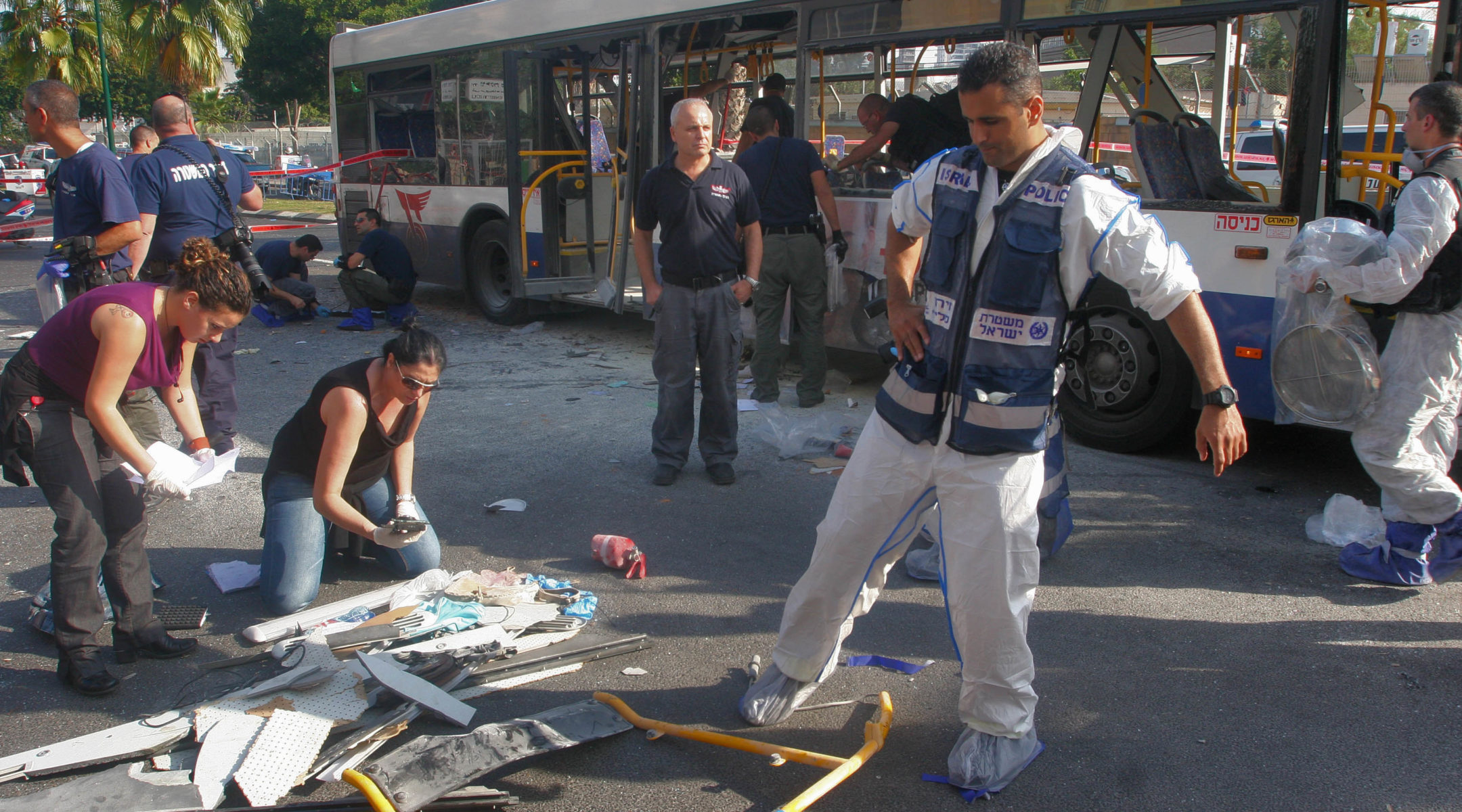 JERUSALEM (JTA) — A bus exploded in Tel Aviv in what police are describing as a terrorist attack.

At least 21 people were injured in Wednesday’s blast, according to a spokesman at the city’s Sourasky Medical Center-Ichilov Hospital, where the injured were taken.

The bus exploded at noon in the heart of Tel Aviv, near the central army base called the Kirya.

Israel police spokesman Micky Rosenfeld told reporters that police believe a bomb stuffed with ball bearings and screws was left on the bus by a terrorist who exited the bus shortly before it detonated. An eyewitness told Israel Radio that he saw someone throw a bag onto the bus when the doors were open shortly before it exploded.

As of Wednesday night, police were still searching for a man who fled the scene of the bus bombing. They also increased patrols throughout the city in order to prevent another attack.

Hamas had warned that it would strike back at Israel after its assassination last week of Hamas military chief Ahmed Jabari.

That killing marked the start of Israel’s Operation Pillar of Defense, meant to bring a halt to the rocket fire from Gaza.

Palestinians in Gaza City began celebrating in the streets when news of the bus attack became known, according to Israel’s Channel 1.

“Hamas blesses the attack in Tel Aviv and sees it as a natural response to the Israeli massacres … in Gaza,” Hamas spokesman Sami Abu Zuhri told Reuters.

The United States condemned what it called “the terrorist attack on a bus in Tel Aviv.”

“Our thoughts and prayers are with the families of those injured, and with the people of Israel,” White House spokesman James Carney said in a statement. “These attacks against innocent Israeli civilians are outrageous. The United States will stand with our Israeli allies, and provide whatever assistance is necessary to identify and bring to justice the perpetrators of this attack. The United States reaffirms our unshakeable commitment to Israel’s security and our deep friendship and solidarity with the Israeli people.”

U.S. Secretary of State Hillary Rodham Clinton reiterated in a statement after leaving Israel, where she met with Israeli Prime Minister Benjamin Netanyahu, that the U.S. “will provide any assistance that Israel requires.”

“As I arrive in Cairo, I am closely monitoring reports from Tel Aviv, and we will stay in close contact with Prime Minister Netanyahu’s team,” she said.