Studying abroad in a war zone, Americans in Israel are shaken but undeterred 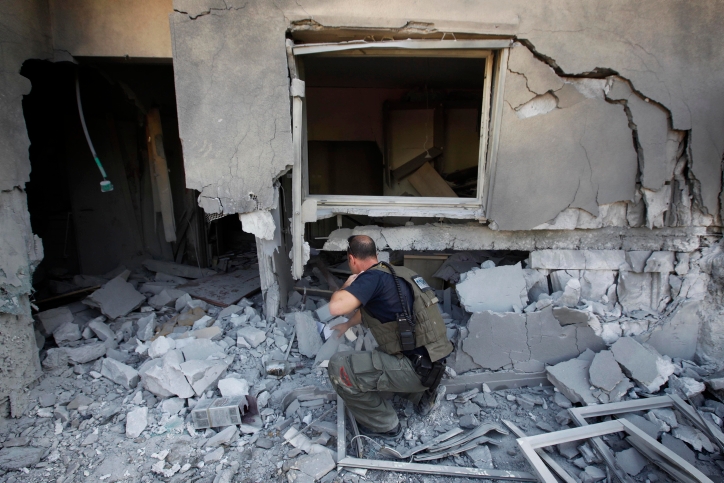 Israeli policeman inspecting a house that was hit by a rocket in the southern city of Beersheva, Nov. 20, 2012. (Miriam Alster/Flash90)
Advertisement

TEL AVIV (JTA) — When the first two sirens went off, Shoshana Leshaw ran from her second-floor bedroom down to the bomb shelter in the basement. By the time the third and fourth sirens wailed, she went no farther than the stairwell.

“It’s almost like you’re sick of the sirens interrupting your sleep,” Leshaw said. “You just want to get it over with and go back to what you’re doing.”

Fifteen air-raid sirens in total rang out in the southern Israeli city of Beersheva on the night of Nov. 14, the first night of Israel’s Operation Pillar of Defense aimed at bringing an end to Palestinian rocket fire from Gaza. The sirens repeatedly woke Leshaw, a junior at Queens College in New York, and most of the 25 other study-abroad students at Ben-Gurion University.

They were among the thousands of young Americans who come to Israel each year to study or work, but found themselves instead scurrying for cover last week as Hamas rained missiles on Israel.

Students said they never feared for their physical safety; they had been trained on how to react in the event of a missile strike. But many said that living in cities targeted by missiles gave them a new appreciation of the realities of life in Israel, and some found themselves quickly copying the casual approach to war that Israelis have cultivated over decades of living under military threat from their neighbors.

In Tel Aviv with Oranim-Israel Way, an internship program, Stephen Fox was surprised to find his Israeli co-workers joking about the missiles. After a while, though, he found himself thinking of the sirens as a fire drill. A few days after last week’s bus bombing in Tel Aviv, Fox, 23, boarded his bus to work without a second thought.

“Halfway through it I was like, ‘Should I be taking the bus?’ ” he said. “It didn’t even occur to me. The restaurants and bars were still going, people were out shopping. It was like normal.”

Oranim, which has a division in the southern city of Ashdod, brought all of its participants to Tel Aviv after fighting broke out. One participant left the program and four others returned home for two weeks with plans to come back. Michal Ben-Ari, Oranim’s Tel Aviv coordinator, said one of the week’s biggest challenges was reassuring parents that their children were safe.

“Parents told us, ‘I don’t see anything on the news, so I’m imagining the worst,’ ” Ben-Ari said.” As soon as we gave them information on what was going on in Tel Aviv, they felt a lot better.”

Other programs with students in southern Israel also took measures to remove them from the path of incoming rockets. The day after Pillar of Defense began, Ben-Gurion’s study-abroad program took students on a trip to Masada, then relocated them to Sde Boker, another Ben-Gurion campus out of rocket range. Program staff quickly arranged for students to continue coursework there — if necessary for the rest of the semester.

“You’re not just bored, but you feel like you can’t change things,” said Abby Worthen, a University of Pennsylvania student taking her junior year abroad. “We felt like there was nothing we could do, and that was hard.”

Worthen, like other students, was shaken the first time she heard a siren — a feeling she said separated the study-abroad students from their Israeli classmates, many of whom were reservists called to serve in the Israeli army.

“I’m almost jealous of Israelis,” Worthen said. “They have this way about them that’s calm and rational, and I don’t. On some level it’s a lot more intense for them because they have a stake in it, [but] it wasn’t as meaningful to them because this is sort of run of the mill.”

Even programs considered safely out of range were impacted by the fighting. Nativ, a Conservative post-high school program in Jerusalem, prohibited participants from traveling to Israel’s South or metropolitan Tel Aviv, both areas targeted by rockets. Oranim asked its participants to notify staff whenever they left Tel Aviv. Often stuck at home, the Americans turned to talking politics — too much, according to Fox.

“I definitely learned a lot more about Israel and the Gaza conflict, but talking about it 24-7, there wasn’t that much news that could sustain conversation,” he said. “So we found ourselves rehashing the same conversations, so it got a little exhausting.”

The intense focus on the fighting, though, reminded Worthen of the physical and emotional distance between Israel and the United States.

“It’s so hard listening when there are real things going on in the world, that Hostess is going out of business,” she said, referring to news last week of the snack maker’s demise. “I had to remember that there are other things in the world.”