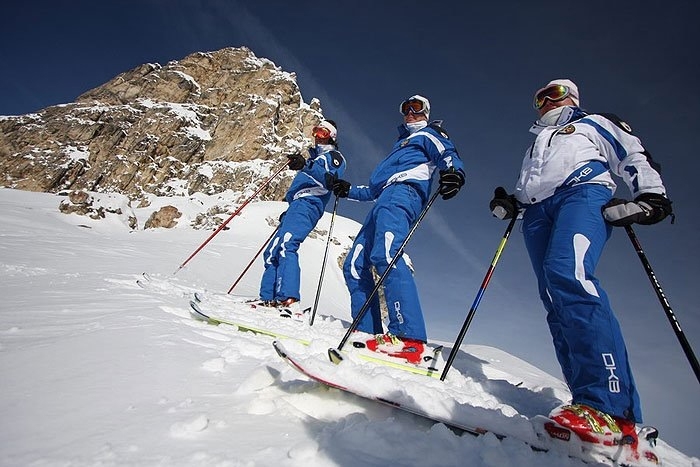 Kosher-keeping skiers now have an abundance of affordable options in the European Alps. (Courtesy of My One Hotel, Canazei) ()
Advertisement

AMSTERDAM (JTA) — Skiing has always been something of a rich man’s sport.

Between the costs of travel, accommodations, lift tickets and lessons, a family with children can easily drop upward of $6,000 for a few days on the slopes. If you keep kosher, the costs can be even higher.

No longer. Over the past decade, Jewish entrepreneurs have been crafting affordable alternatives to Europe’s handful of $250-per-night kosher ski lodges. The result is that nowadays, hundreds of observant middle-class families flock each winter to Europe’s Alpine slopes.

“With the financial crisis, few can afford a Jewish four-star hotel,” says Dolly Lellouche. She and her husband, Chlomo, run D’holydays, a travel agency that operates a two-star “kosherized” hotel — a regular hotel that is temporarily made kosher to accommodate an observant clientele. This year, D’holydays took over the Hotel Grand Aigle at Serre de Chevalier, a major resort in southeast France.

The newer, cheaper alternatives to all-year kosher hotels include kosherized hotels like the Grand Aigle, which are typically available to kosher travelers for just a week or two; do-it-yourself options, where agencies or groups of friends rent ski apartments and prepare food themselves; and discounted kosher trips run by Jewish nonprofits.

But nowhere are low-cost solutions and workarounds more abundant than in France, a country of more than 550,000 Jews and home to some of the largest ski resorts in the world.

Eli Club, a Nice-based kosher ski agency, will set you up at the Serre de Chevalier at Hotel La Belle Etoile, a three-star establishment, while Club J, another agency, will send you to Hotel La Ruade — both kosherized hotels. Toruman, a Belgium travel agency, and Maagalei Nofesh in Israel offer a range of hotels in which a family of four can expect to bid adieu to $3,000-$4,000 for a week of skiing, Jewish hospitality and certified glatt kosher cooking.

Though still a handsome sum, it is far less daunting than the $6,000-$8,000 price tag for a family of four to vacation at one of Europe’s four-star kosher ski hotels, like My One Kosher Hotel in Italy or Metropol Hotel Arosa in Switzerland.

That’s especially true considering that accommodation is only the beginning. Ski passes can cost an adult another $250 or more per week. Renting gear can pile on another $100 per person. Ski lessons for kids can cost $300. But there are ways to cut down on those costs as well.

“A good hotel should be able to get you a good discount on these expenses,” Lellouche said.

Still, no matter how many stars they have or what peripheral discounts they offer, kosher ski lodges tend to cost substantially more than their non-kosher equivalents, according to Pinchas Padwa, an Amsterdam-based rabbi who has been providing kosher certification to ski resorts in Europe for two decades.

“The overhead of running a kosher hotel in the Alps is overwhelming,” Padwa said. In Switzerland, where ritual slaughter is prohibited, all kosher meat and many other kosher products need to be imported. On top of that are kosher certification costs and special expenses associated with finding cooks capable of making Jewish foods.

To keep expenditures down, some skiers get together and rent non-kosher vacation units for a lower rate. The downside there is vacationers need to bring their own kitchen equipment and a taste for vegetarian home cooking, as they are likely to depend for their nourishment on the limited supply of certified kosher products available at the local supermarket.

“In renting an apartment or choosing a hotel, it’s important to check how close the locale is to the actual piste,” or slope, Lellouche said. Another complication to watch out for is that most ski apartments are rented for one week starting Saturday, an arrangement that deprives observant families of two skiing days.

Young adults or couples without children have more options — especially in Holland, where for the past two winters, Jewish organizations have subsidized a ski getaway organized by the Maccabi Skijar group for about 60 young Jews. Participants pay only $650 for flights from the Netherlands, food and accommodations for eight days in France’s Tarentaise Valley.

The Maccabi Skijar group is predominantly but not exclusively Dutch, with some participants coming from England and Israel, according to one of the group’s three leaders, Maxime van Gelder. This year, skiers will descend on two chalets, one reserved for kosher eaters.

Van Gelder plans to buy kosher meat in Lyon, some 50 miles away, and deliver it himself. “The idea is to help Jews be together and have fun together,” he says.

For Shabbat, the group will be joined by Rabbi Menachem Sebbag, the Dutch army’s top Jewish chaplain and rabbi of the popular AMOS shul near Amsterdam.

The Israeli organization Keneski runs a similar program for singles, but for more money ($1,000-$1,250, flight not included) and in more luxurious surroundings. This year the “Keneskiers” — an international group with a strong Israeli contingent — will stay at the kosherized four-star Royal Olympic Hotel in Pinzolo, Italy.

For the past two years, Keneski brought skiers to My One Kosher Hotel, a permanently kosher, four-star establishment in Canazei, Italy. The hotel owners, Avi and Belinda Netzer, opened their hotel four years ago.

“At first other hotel owners seriously resented us coming here,” Avi Netzer recalls. “They didn’t understand this kosher business and thought competition was fierce enough without our 50-room hotel. It took a while before they saw our hotel brought in clientele that would otherwise never come.”

Menachem Glik, an Israeli who participated in Keneski’s 2011 trip, said his vacation was filled with “suspense, emotions” and even “romance growing on the slopes and on the lift.” At the same time, he says, it was a chance to get in touch with “young people from all over the world, from different cultures and backgrounds and speaking different languages, but with one common denominator” — a love for skiing.