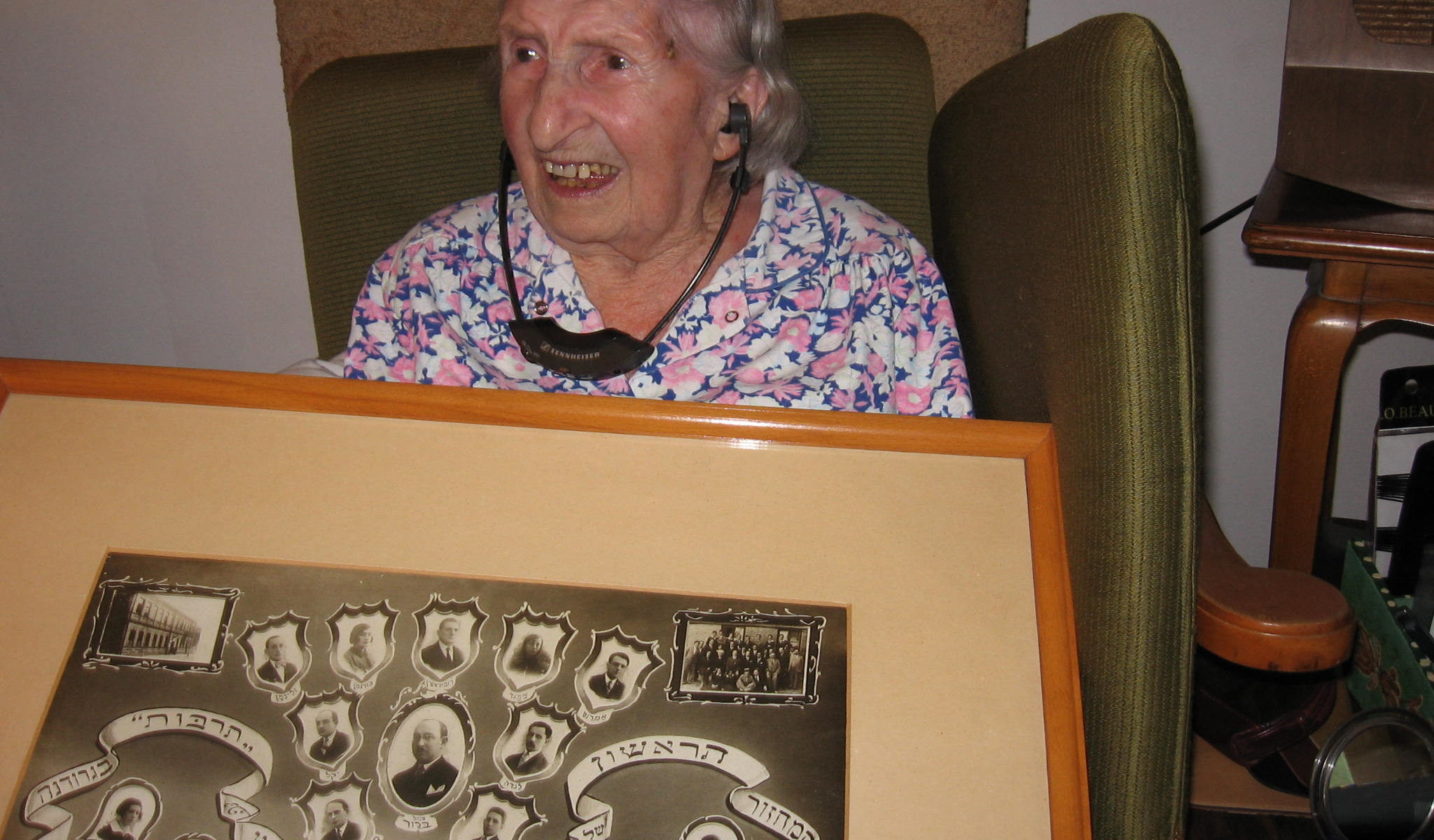 Devorah Lipschitz Kaplan, the last known surviving member of the Class of 1930 from Grodnoâ€™s Tarbut Gymnasium, holding a photograph of the class, March 2010. She died two months after the visit by Ruth Marcus. (Courtesy Ruth Marcus)
Advertisement 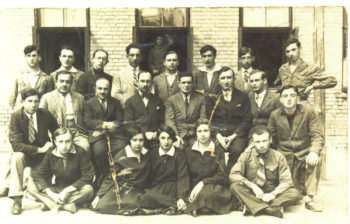 The fate of three of the 15 students in the first graduating class of Grodno’s Tarbut Gymnasium in 1930 (pictured with six of their teachers and the principal) remains a mystery. (Courtesy Ruth Marcus)

The fate of three of the 15 students in the first graduating class of Grodno’s Tarbut Gymnasium in 1930 remains a mystery. The three students, shown in the insets from left to right, are Velvel Poliak, Yitzhak Levin/Levine and Max Margolis. (Courtesy Ruth Marcus)

BALTIMORE (JTA) — In 2008, Ruth Marcus began looking ahead to 2010: the centennial of the birth of her late father, Yitzhak Eliasberg, and 80 years since Grodno’s Tarbut Gymnasium graduated its first class, Eliasberg included.

Marcus, a retired statistician who lives in the Tel Aviv suburb of Ramat Aviv, set out to research the fates of the 15 students, six teachers and the principal who were photographed in the school’s courtyard in June 1929, a year before graduation. She had the picture, but besides her father knew no one’s name.

Nearly five years later she has determined what became of all but three students in the photo. Marcus remains in contact with the relatives of her father’s classmates and of one teacher, and has become a repository of photos and information on other graduating classes in Tarbut Gymnasium’s brief existence.

In October, Marcus was the guest of honor when a Grodno university opened an exhibition on the history of the Jewish school. As Israel’s national anthem, “Hatikvah,” played at the ceremony, Marcus cried freely.

“It was one of the most emotional moments of my life,” she said. “I thought of my father: What would he think if he saw me there?”

The Tarbut Gymnasium was established in the late 1920s and functioned until the early 1940s, when the Soviets and then the Nazis invaded the city that then was in Poland and now is in Belarus. The 1930 class covered a range of ages, depending on when students entered. Eliasberg was 20 at graduation; some were as young as 17.

Tarbut occupied an entire brick building, with the school on the first floor and the school’s teacher-training institute on the second. The structure now serves as a music school, and Marcus has visited it on all five trips to Grodno in recent years. Her 12-year-old grandson, Daniel, wants to come along next time.

To gather information on the Tarbut students, Marcus interviewed people in Israel and scoured the archives at Yad Vashem, the country’s pre-eminent Holocaust research institution, and Kibbutz Kfar Menachem, the farming village established by immigrants from Grodno who like her father were members of the Hashomer Hatzair youth movement. Marcus also mentioned  the photograph on JewishGen.org’s special-interest group for Belarus, and her search caught the eye of “Seeking Kin.”

The three students whose fate remains unknown are Velvel Poliak, Max Margolis and a boy whose surname was Levin or Levine and whose first name may have been Yitzhak.

Poliak apparently moved to Montevideo, Uruguay, shortly after graduating Tarbut, so a Spanish-speaking friend is helping Marcus write to every Poliak household in that country. She heard that Margolis settled in the United States, became a doctor and worked for the United Nations. Of Levin or Levine she knows nothing.

One highlight of Marcus’ research was her meeting in March 2010 with Devorah Lipschitz Kaplan, one of only three females in the class.

“It was such an exciting moment,” Marcus said of seeing Kaplan, who then was 98 years old and quite alert, but would die two months later. “She was like the last of the Mohicans.”

Besides the woman herself, a treasure that Marcus encountered in Kaplan’s Rehovot home was a second photograph of the 1930 graduating class. In the style of the time, it consisted of individual portraits aligned across the page. A ribboned strip in Hebrew mentions the Jewish calendar year and reads “5690 — The first graduating class of the Tarbut Gymnasium of Grodno — 1929-30.

For Marcus’ purposes, the great value of the picture lay in the surnames written under each portrait. She now had more to go on.

Another stroke of luck occurred on a recent visit to Kfar Menachem, near Rehovot. In a folder in the kibbutz’s archives, Marcus found a portrait of a boy. Her jaw dropped. The portrait was of the same Poliak from the two class pictures. On the back of the portrait he had written his first name and an inscription in Yiddish.

The inscription indicated that Poliak had sent the picture in 1931 from Montevideo to his friend in Grodno, Yisrael Einstein. Finding the photograph was pure serendipity both because Einstein was not a member of Tarbut’s class of 1930 — he was in the class of 1931 — and because he lived on Kfar Menachem only a short time, yet left behind a plethora of photos.

For all Marcus knows, she said, Poliak returned from Montevideo to Grodno and was killed in the Holocaust. But she hopes he remained safe in Uruguay.

Perhaps because the school had a strong Zionist orientation and several students were members of Hashomer Hatzair, a good many of them departed shortly after graduation for prestate Israel and thereby avoided the Holocaust. Marcus’ father, for example, reached the country in 1932, lived briefly on various kibbutzim and settled in Tel Aviv, where he worked for a citrus-growing company. He died in 1982.

Six additional graduates immigrated to prestate Israel; three went to the United States, one of whom later moved to Israel; and Poliak went to Uruguay.

Three graduates remained in Grodno: One was killed in the Holocaust and two survived, with one of the survivors heading to the United States and the other, his first cousin, to Australia. Six of the seven faculty members shown in the picture were killed in the Holocaust; the only survivor was Shmuel Amarant, who taught history and psychology. He fought with the partisans and later reached Israel.

One person whom Marcus located was the son of Tarbut student Mordechai “Motl” Bass. Noah Bass, a physician in Pittsburgh, was easy for Marcus to find online because he was named for his paternal grandfather, who had co-founded the Tarbut school.

Motl Bass and his wife survived the Holocaust by escaping from the Grodno ghetto and hiding with a Polish family. They later settled in Atlanta, where their son was born. When Bass visits his son, Avi, who lives in Jerusalem, he makes sure to see Marcus, too.

“I was surprised that somebody was looking. … If she had found us when he was alive,” Bass said of his father, who died in 2002 at age 89, “it would have been very interesting for him to find out what happened to his classmates.”

(Please email Hillel Kuttler at seekingkin@jta.org if you know the whereabouts of the descendants of Velvel Poliak, Yitzhak Levin/Levine and Max Margolis. If you would like “Seeking Kin” to write about your search for long-lost relatives and friends, please include the principal facts and your contact information in a brief email. “Seeking Kin” is sponsored by Bryna Shuchat and Joshua Landes and family in loving memory of their mother and grandmother, Miriam Shuchat, a lifelong uniter of the Jewish people.)