Orly Bahat, center, principal of the Amirim Elementary school, sitting with six of her teachers during a faculty meeting. (Ben Sales)
Advertisement 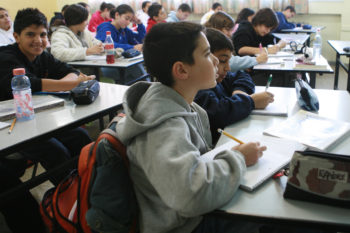 Israeli middle-schoolers, shown studying in a classroom in 2007, have scored better on international tests since that year. (Maya Levin / Flash90 )

HOLON, Israel (JTA) — Just before 1 o’clock on a sunny afternoon, students streamed out of the Amirim Public School and headed for home. But for their teachers, the workday was far from over.

Some would stay late to attend faculty meetings and prepare upcoming lessons. Others would help small groups of students in subjects like math and science, Hebrew and English.

The extended hours are but one aspect of sweeping changes instituted by the Israeli Ministry of Education in 2009 after the country’s students posted disappointing results in several international achievement tests in 2006 and 2007. Israeli fourth-graders had ranked 24th among some 60 countries in math, while eighth-graders came in 25th in science and 31st in reading comprehension.

In an effort to improve performance, the Education Ministry urged teachers to focus their classes on the international tests and develop precise lesson plans and curriculums. The education budget was upped by hundreds of millions of dollars — $100 million more was allocated in 2012 alone — and teachers were compensated for lesson planning time and teaching small-group enrichment classes.

“I’m happy that we have these resources,” said Orly Bahat, Amirim’s principal. “We never had a situation where, when the kids went home, we could stay here and they would pay us. The kids got this new help.”

The results have been significant, both across Israel and at Amirim.

In 2011, Israeli fourth-graders had improved to seventh place in the math section of the Trends in International Mathematics and Science Study test given to students in approximately 60 countries including the United States, China and several European countries. Eighth-graders came in 13th on the science portion of the test. Israelis also finished 18th in the 2011 Progress in International Reading Literacy Study, which tested students in about 40 countries.

At Amirim, students taking the math test moved up from an average grade of 64 percent in 2007 to 80 percent, placing them in the top 10 percent of Israeli schools. Its students also moved into the top fifth of Israeli students in Hebrew, an improvement of 10 percentile points.

“We had a clear measurable goal; every teacher and every employee knew what was expected of them,” said Dalit Shtauber, the director-general of the Education Ministry. “We [previously] talked about process and we [moved] to an emphasis on results at every level, from the general staff through individual schools.”

The improvement in test scores paints only a partial picture, at best, of Israeli education. Low-income students performed far worse than wealthier ones. Arabs lagged behind both Israeli Jews and the international average in math and reading. Class size in Israel, which is about 50 percent higher than the U.S. average of 24 students, remains a cause for concern. Haredi Orthodox students, who don’t learn the country’s core curriculum, did not take the test and thus were not factored into Israel’s averages.

Shtauber says that test scores in all socioeconomic sectors have improved since 2007, though the Education Ministry’s statistics show the gap in scores between rich and poor had shrunk only slightly in that period and have widened on the reading comprehension test.

But on the whole, the improvements have been dramatic. And Israeli teachers, who initially opposed the increased demands on their time, seem to have come around.

“We know what’s expected and we’re very precise,” said Orly Barel, a Hebrew teacher at Amirim who described the initial reaction of her colleagues as “antagonistic” to the new requirements.

Teachers are now expected to work longer hours, and they bemoan the size of Israeli class sizes, which range from 32 to 40 students per class. And like teachers in other countries where standardized testing has been made a crucial part of accountability in education, they resisted infringement on their classroom autonomy.

“The teachers need to adjust themselves to the system,” said Ran Erez, who heads Israel’s high school teachers union. “If you’re teaching one way for 20 years and they say to do it differently, it’s hard.”

The funding increases also have allowed schools to hire more teachers to teach specific subjects, as opposed to having one teacher teach several subjects.

“It’s just like when you break a leg, you go to an orthopedist, not a general practitioner,” Bahat said. “Parents and kids know they have expert teachers.”

“A lot of things have changed,” she said. “Now the teachers help kids more, listen to parents better. They help us help our kids at home.”

Amirim is one of Israel’s luckier schools, located in an upper-middle class neighborhood of Holon, a city of 184,000 south of Tel Aviv. The ministry hopes to close the achievement gaps between schools like Amirim and those in lower income areas in part by reducing class sizes and providing students more opportunities for small-group learning. Teachers who choose to work in low-income towns also receive financial incentives.

But Shtauber says the ministry “can’t solve the whole problem” of economic inequality.

“If a kid comes from a good home, he has a computer, his parents read,” Bahat said. “Parents with no time or money, their kids come from a tough background. Their upbringing isn’t the same.”