Yair Lapid, founder of the Yesh Atid party, at an economy conference in Tel Aviv on Dec. 25, 2012 presenting a graph similar to the “bomb” graph shown by Prime Minister Benjamin Netanyahu at the United Nations General Assembly three months earlier. The Lapid graph shows the difficulties of the middle class. (Yossi Zeliger/Flash90) 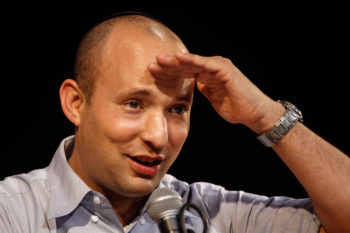 Naftali Bennett, leader of the Jewish Home party, speaking at a high-tech conference in Jerusalem for the haredi Orthodox, Jan. 15, 2013. (Uri Lenz/FLASH90)

TEL AVIV (JTA) — Uncertainty is an inherent condition of democratic politics, but one outcome is all but certain in next week’s Israeli elections: the right wing will win and the left wing will lose.

Almost every party acknowledges that the merged Likud and Yisrael Beiteinu factions will take the most seats and be the standard-bearer of the next coalition government. For the fifth straight election, the center-left Labor will likely lose as Likud or an offshoot runs the state.

Benjamin Netanyahu, Israel’s Likud prime minister, almost definitely will win another term. Likud-Beiteinu is expected to amass 33 to 38 seats in the 120-seat Knesset, nearly twice as many as the likely runner-up, Labor, which should receive 17 to 20.

The virtual certainty of this outcome, and the right-wing’s bold self-assurance in the face of it, has reduced a fragmented center-left to shambles. Labor and two new parties, Yesh Atid and Hatnua, have similar agendas focused largely on socioeconomic issues, yet every unification effort has ended in recriminations. And only Hatnua among the three parties has anything to say about the diplomatic future of the state, and it’s led by a former rising star of the right.

Netanyahu’s biggest challenge leading up to the Jan. 22 election has come not from his traditional sparring partners on the left but from the right, where the hawkish Jewish Home Party has enjoyed a meteoric rise in the polls.

The ascent of Jewish Home has been the biggest story of the campaign. When elections were called in October, pundits expected the religious Zionist party to win seven or eight seats. Now most polls have the number at 14 or 15 — on track to be the Knesset’s third-largest party.

Jewish Home Chairman Naftali Bennett, a newcomer to politics following a high-tech career and leadership positions in the settler movement, has engineered the gain by courting secular right-wing voters and adopting some progressive economic policies.

But Bennett is no moderate. He opposes the creation of a Palestinian state under any conditions and has said he would disobey a military command to dismantle settlements, though he later walked back from that position.

The party’s fortunes will depend on whether voters trust Bennett’s promises of tighter security and cheaper housing, or remain wary of a party that skews far right on certain national security and religious questions.

As the fortunes of Jewish Home have risen, those of Yesh Atid have declined. Expected to be a major story of the campaign when it launched in April, Yesh Atid was founded by Yair Lapid, a former television journalist and son of the late secularist politician Tommy Lapid. But its poll numbers have fallen due to infighting in the centrist camp and Lapid’s unwillingness to discuss diplomatic and security issues.

Polls now show the party taking about 10 seats, but if Yesh Atid gains 12 or 13, it will mean that Lapid’s economic message has struck a chord as Israel confronts a budget deficit of more than $10 billion.

If voters perceive Lapid as unprincipled or inexperienced, especially on matters of diplomacy and security, they may turn to the one centrist party focused on Israeli-Palestinian peace negotiations: Hatnua, which was founded and is led by Tzipi Livni, a former Kadima head and ex-Likud minister.

Livni has spent the entire campaign bashing Netanyahu for his alarmist and isolating rhetoric on national security. But she has not vowed to oppose his coalition and could give him cover to move forward on negotiating a peace agreement with the Palestinians if he chooses.

Hatnua has polled similar numbers to Yesh Atid. If it reaches the teens, it could indicate that a constituency still exists that supports peace negotiations. A mediocre Hatnua showing would confirm the perception of many Israelis that the conflict will not be resolved in the coming years.

What Livni really wants is a coalition without Netanyahu led by her or Labor chair Shelly Yachimovich. Seeking to harness the energy of 2011’s social protests here, Labor has presented itself as the alternative to Likud-Beiteinu. Yachimovich said recently that she would not join a Netanyahu-led coalition in a move that would seem to consign Labor to the opposition.

Labor has avoided discussing Israel’s diplomatic future, which seems to have disaffected some voters, and almost certainly will take fewer than 25 seats. That would be an improvement on last election’s 13 but still a decline for a party that once dominated Israeli politics.

As Livni, Lapid, Yachimovich and Bennett jockey for potential spots in a Likud-led Cabinet, one political bloc’s numbers will likely remain fairly stable: Haredi Orthodox parties have 15 seats now, a number that is expected to slightly increase. The haredi platform, however, has become increasingly unpopular, as more and more Israelis oppose full-time yeshiva students receiving government stipends while avoiding the nation’s mandatory military conscription — concerns that have animated Yesh Atid’s campaign, among others.

A sliver of hope does exist for a centrist victory, with Livni and Yachimovich still campaigning as if they have a shot at the premiership. According to two polls, approximately 20 percent of voters remain undecided. If they all go to centrist parties, the centrists may be able to cobble together a governing coalition.

At this point, though, it looks like a fantasy for Labor, which leaves it in the same place it’s been since 2001: figuring out how to fit into a Knesset where the right runs the show.