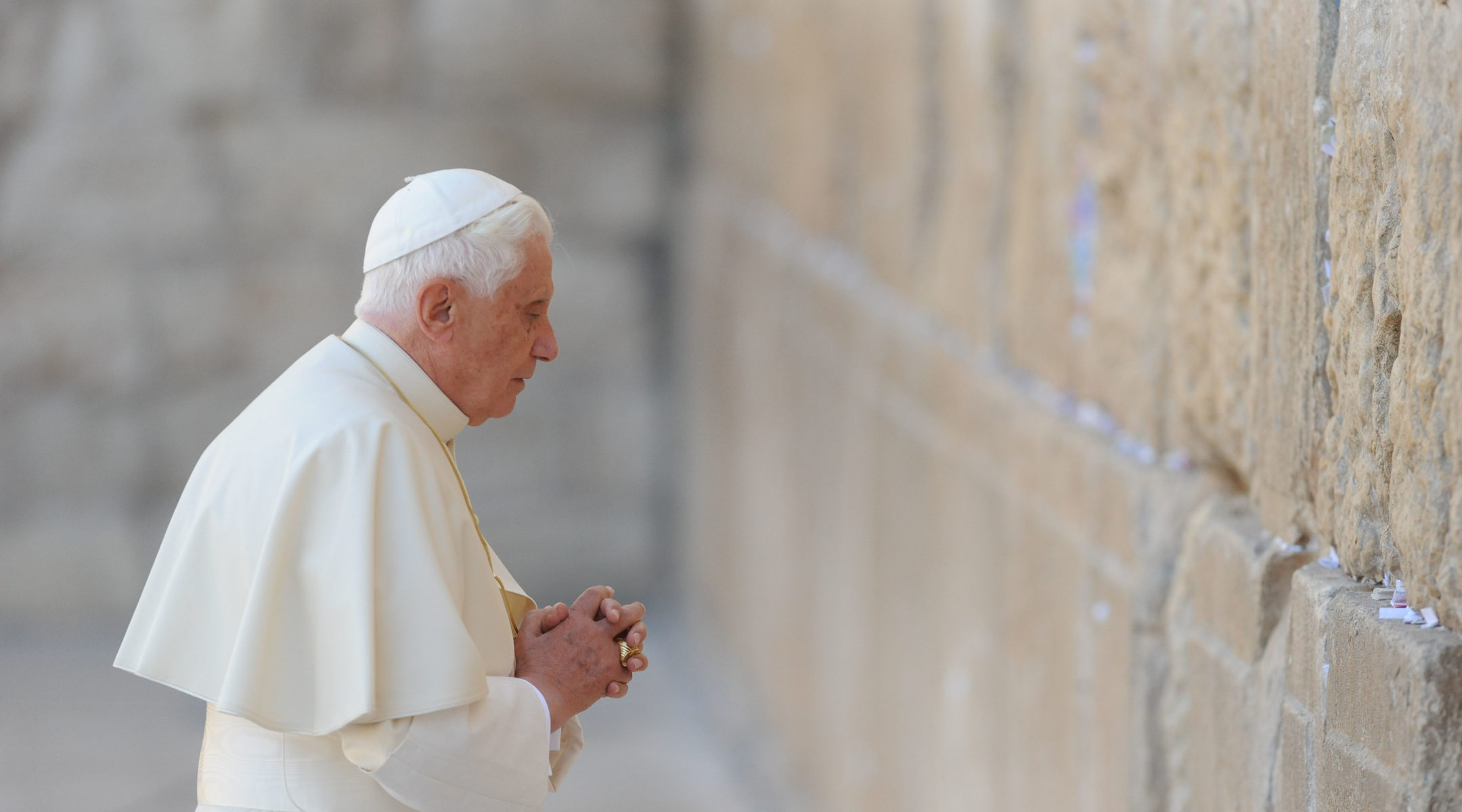 Pope Benedict XVI praying at the Western Wall in Jerusalem, May 12, 2009. (Flash90)
Advertisement

ROME (JTA) — Pope Benedict XVI’s eight-year reign as head of the world’s 1 billion Catholics sometimes was a bumpy one for the Vatican’s relations with Israel and the wider Jewish community. But it was also a period in which relations were consolidated and fervent pledges made to continue interfaith dialogue and bilateral cooperation.

Both elements were evident in the tributes that flowed from Jewish leaders following the surprise announcement Monday that due to his advanced age and weakening health, Benedict would step down on Feb. 28.

“There were bumps in the road during this papacy,” Anti-Defamation League National Director Abraham Foxman said in a statement. “But he listened to our concerns and tried to address them, which shows how close our two communities have become in the last half century and how much more work we need to do together to help repair a broken world.”

The German-born Benedict, 85, is the first pope to resign since the 15th century. He announced his decision at a meeting of cardinals at the Vatican.

“In today’s world,” he declared in Latin, “subject to so many rapid changes and shaken by questions of deep relevance for the life of faith, in order to govern the bark of Saint Peter and proclaim the Gospel, both strength of mind and body are necessary, strength which in the last few months has deteriorated in me to the extent that I have had to recognize my incapacity to adequately fulfill the ministry entrusted to me.”

The pope’s brother told the German news agency DPA that Benedict had been weighing the decision for months. Still, his resignation came as a shock.

“There were moments of divergence, inevitable because of the essential and irreconcilable differences between the two worlds,” said Riccardo Di Segni, the chief rabbi of Rome. “But there was always a positive will to compare and construct.”

Under Benedict’s leadership, the Vatican “has been a clear voice against racism and anti-Semitism and a clear voice for peace,” Israeli President Shimon Peres said in a statement. “Relations between Israel and the Vatican are the best they have ever been, and the positive dialogue between the Catholic Church and the Jewish people is a testament to his belief in dialogue and cooperation.”

Less than two weeks earlier, in fact, Israel’s deputy foreign minister, Danny Ayalon, had said that after years of fitful negotiations, Israel and the Vatican were “on the verge” of resolving outstanding bilateral issues and finalizing the Fundamental Agreement governing relations between the two states.

Benedict was elected pontiff in April 2005 following the death of Polish-born Pope John Paul II. As Cardinal Joseph Ratzinger, he had been a close friend and adviser to the charismatic John Paul II, who had made fostering better relations with the Jews a cornerstone of his nearly 27-year papacy.

“For Jews and Israel, Benedict’s papacy has meant a consolidation and confirmation of the developments and achievements during John Paul II’s papacy,” Rabbi David Rosen, the American Jewish Committee’s international director of interreligious affairs, told JTA.

Benedict’s own personal history also helped shape this commitment. Born in Bavaria, he grew up in an anti-Nazi Catholic family but, like all teenagers, was obligated to join the Hitler Youth organization and was conscripted into the German army. Eventually he deserted.

As pope, Benedict met frequently with Jewish groups and visited synagogues in several countries. His first trip abroad as the pontiff was to his native Germany, where he made it a point to visit the synagogue in Cologne and issued a strong condemnation of anti-Semitism and “the insane racist ideology” that led to the Holocaust. The visit marked only the second time a pope had visited a synagogue. Benedict later visited synagogues in Rome and New York.

He also confronted his troubled past in Poland in 2006 when he visited Auschwitz and, declaring himself “a son of Germany,” prayed for victims of the Holocaust, as well as on a pilgrimage to the Holy Land in 2009 when he visited Yad Vashem in Jerusalem and met with Holocaust survivors.

As a young theologian in the 1960s, Benedict attended the Second Vatican Council, which aimed to liberalize the Church. In 1965, the council promulgated the Nostra Aetate declaration that opened the way to Catholic-Jewish dialogue. Benedict repeatedly reaffirmed commitment to Nostra Aetate’s teachings. Still, several issues that emerged during his tenure called that commitment into question, casting a shadow over Catholic-Jewish relations.

These included the revival of a pre-Vatican II Good Friday Latin prayer that called for the conversion of Jews, moving the Holocaust-era Pope Pius XII one step closer to sainthood and reaching out to a breakaway ultratraditionalist group, the Society of St. Pius X, in an effort to bring it back into the mainstream Catholic fold. In doing so, Benedict revoked the excommunication of four of the movement’s bishops, one of whom turned out to be a Holocaust denier.

Vatican officials said a conclave of cardinals will be convened in March to elect a new pope. But there is no clear indication as to who might be picked, or from what country or continent he might come. Vatican observers said that since all the cardinals eligible to vote for a new pope had been appointed either by John Paul II or Benedict, whoever is elected would probably follow similar overall policies.

“History will view Benedict as the last of the traditional European pontiffs, the last pope who personally experienced World War II and the Holocaust, and one of the last Catholic leaders to have participated in the historic Second Vatican Council,” said Rabbi James Rudin, the AJC’s senior interreligious adviser, who first met Ratzinger in the 1970s.

The next pope will have to deal with fallout from scandals that tainted Benedict’s reign, from continuing accusations of sex abuse by priests to a security breach that saw Benedict’s butler leaking the pope’s private papers to a reporter. It remains to be seen, however, whether fostering Jewish-Catholic relations will receive less attention under a younger and possibly non-European pope without the historic memory of the Holocaust and Vatican II.

“Doctrinally this will never happen, but in terms of visibility and engagement that may happen if he is from a place where there is no significant Jewish community present today or in the very recent past,” Rosen said.

Rosen added, however, a non-European pope might be less encumbered by the burdens of the past.

“Past tragedy and past failure are not the best basis for a long-term future relationship,” Rosen said. “This has to be based upon nurturing the sense of common patrimony, roots. Some African cardinals are better in this regard than many European ones.”