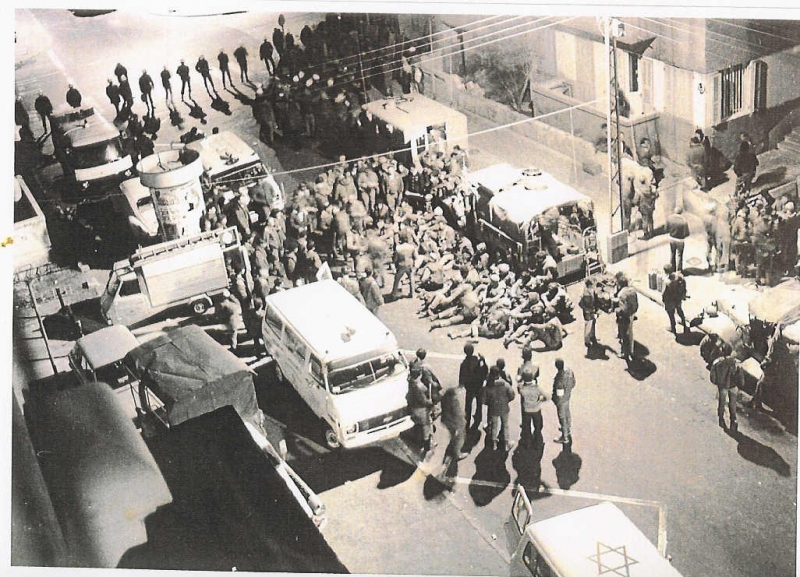 “The staccato of automatic gunfire abruptly ended a quiet evening this correspondent was spending with friends in their flat near the Tel Aviv beachfront last night,” JTA’s Yitzhak Shargil wrote on Mar. 6, 1975.

The 1970s were fraught with Arab terrorist attacks against Israeli targets.

The Savoy Hotel attack was among the worst such attacks of that decade to occur on Israeli soil.

On Mar. 5, 1975 at around 11:30 p.m., two rubber dinghy boats filled with eight trained terrorists from El Fatah, a PLO-affiliated group, quietly docked along the Tel Aviv beach and opened fire on Geula Street with an arsenal of weapons. (In the aftermath of the 2008 Mumbai attacks, website India Today noted the similarities between the Mumbai attackers’ modus operandi and the perpetrators of the Savoy Hotel attack.)

After opening fire on the street, the terrorists proceeded to the Savoy Hotel, where they barricaded themselves, took hostages and detonated an explosive charge that caused part of the building to collapse. A team of IDF soldiers was sent to free the hostages. A total of 18 were killed that night, including three Israeli soldiers, eight guests of the hotel and seven of the terrorists. The last terrorist was tried and in a rare occurence in Israel, was sentenced to death [http://archive.jta.org/article/1976/06/18/2975800/death-sentence-for-terrorist] in 1976.

On the night of the attack, Yitzhak Shargil was minutes from the scene. His eyewitness account was published in the JTA Jewish Daily Bulletin on Friday, Mar. 7, 1975:

When I went into the street, I saw a night-marish spectacle. Red tracer bullets streaked through the night air. The four-story Savoy Hotel, illuminated by floodlights, was surrounded by troops, local police and border police in full battle regalia. Military vehicles, armored cars and personnel carriers clogged the surrounding streets. Red Mogen David ambulance crews were administering first aid to wounded civilians on the sidewalks and gutters. Looking out to sea, the blinding light of magnesium flares revealed naval patrol boats cruising just off the beach.

The entire neighborhood was cordoned off but hundreds of people pressed against police barriers to watch what was transpiring. Sara Najaj, 21, who was being treated for a bullet wound in the leg, had just been married in a small wedding hall next to the Savoy Hotel. The sound of gunfire sent her, her groom and guests into the streets.

She said that her husband, a reserve paratrooper raced off to join a police unit firing at the terrorists. "I screamed at him and ran after him. The next thing I knew I was struck by something. I fell and kept shouting," Mrs., Najaj said. "My husband was ahead of me. He saw me fall and came back. He picked me up and carried me to an ambulance. I haven’t seen him since." She added: "This is a night I won’t forget. At least it happened after we were married.