Barbara Walters returns to The View 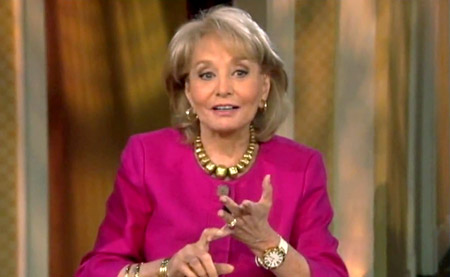 After taking time off since January to get over the chicken pox, Jewish TV personality Barbara Walters finally returned to her ABC morning show, “The View.”

“Today after a lot of scratching and rest, I am fine and I am healthy,” Walters said this morning, showing her scars off to the audience. “People have said I should have my head examined. I did and I’m fine.”

Walters fainted and hit her head in London during President Obama’s inauguration in January: she told the audience she cut her temple on the marble floor and was rushed to the hospital for stitches, where she was then told she caught the chicken pox.

“I got an email from Chelsea Clinton saying she was going to buy her mother and me matching helmets,” said Walters, 83. “The only cure for concussion was rest. The pox came and went weeks ago. The head injury took longer.”

New York Mayor Michael Bloomberg appeared on the show to bring Walters flowers– and to apply for a spot on the show when his term as mayor arrives. Other celebs like Ali Wentworth and Joan and Melissa Rivers taped cute messages for Walters.