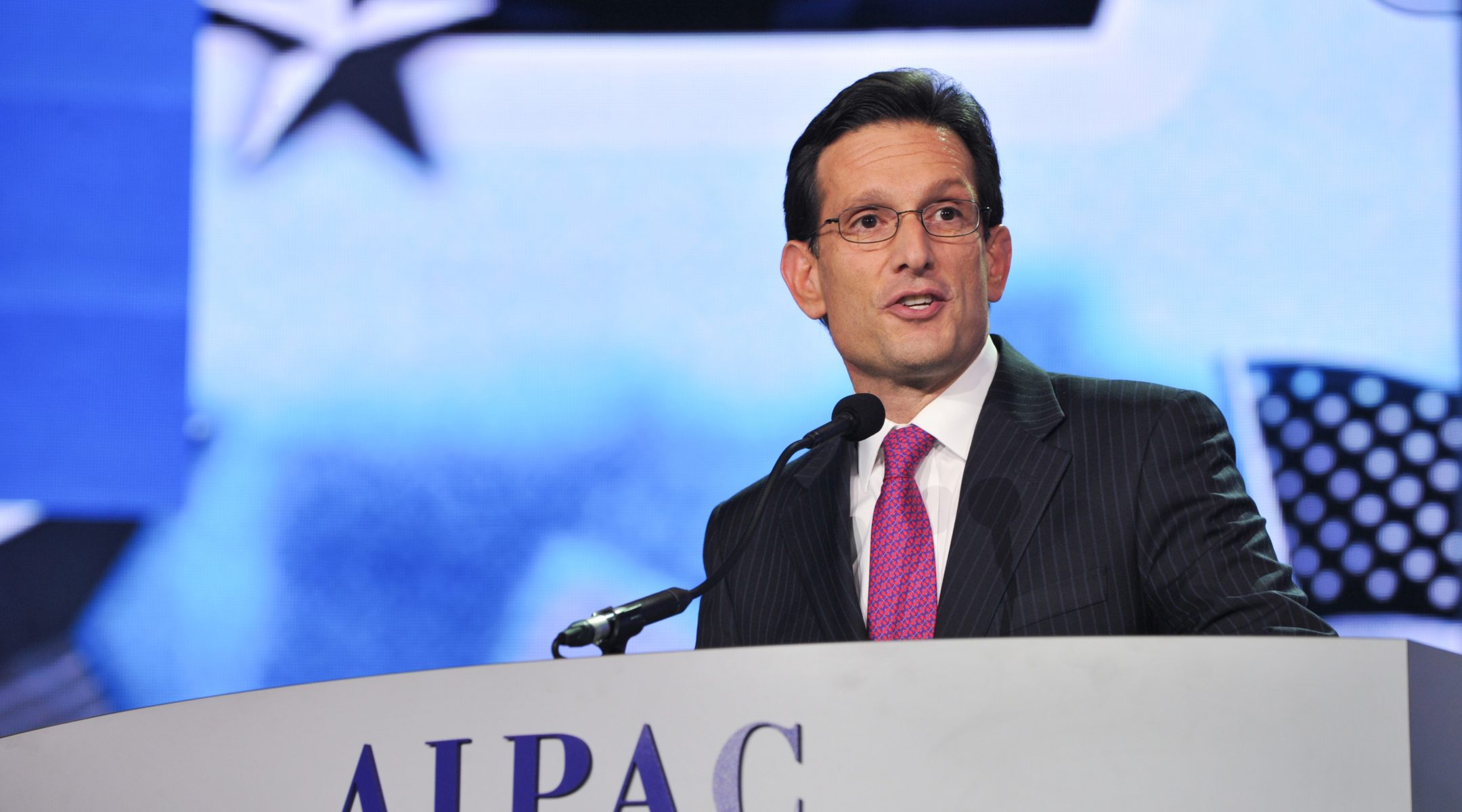 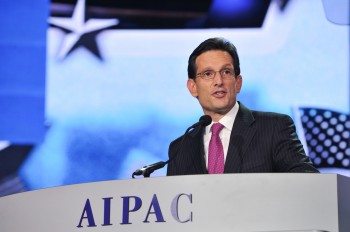 Eric Cantor, the House majority leader, has been a prime figure in negotiations to avoid the sequester, which pro-Israel advocates worry could imperil the security of the Jewish state. (Courtesy AIPAC)

WASHINGTON (JTA) — Imminent threats threading through the rhetoric at AIPAC conferences is hardly new, but this year’s alarm raising had a unique wrinkle: In addition to the prospect of a nuclear Iran, the other danger targeted by the pro-Israel lobby was domestic — sequestration.

The message hammered home throughout the American Israel Public Affairs Committee Policy Conference Sunday through Tuesday was that looming spending cuts mandated by the 2011 sequester could endanger Israel and America’s leadership throughout the world.

The showcase for the message was legislation introduced Monday night in the House of Representatives by two Florida lawmakers — Reps. Ileana Ros-Lehtinen, a Republican, and Ted Deutch, a Democrat — that would designate Israel a “major strategic ally,” a one-of-a-kind label.

One of two initiatives that AIPAC’s 13,000 activists are taking with them Tuesday for lobbying on Capitol Hill, the legislation enshrines much that is already in existence, including $3.1 billion in annual defense assistance to Israel and missile cooperation programs. But the redundancy is precisely the point.

At a time when the president and Congress are considering how best to distribute across-the-board 8.5 percent spending cuts, AIPAC wants Congress to keep its funding for Israel as is.

Ester Kurz, AIPAC’s top congressional lobbyist, told the activists just before they headed for the Hill that “despite growing budget pressure, it is critical that Congress fully funds this aid.” She cited “the growing instability in the region and the mounting threats on Israel’s borders.”

AIPAC Executive Director Howard Kohr in his traditional Tuesday morning pep talk cast the funding as a matter of life and death.

“You see, when in a few moments we depart this convention center and make our way to Capitol Hill, it is vital that we carry with us these stories,” he said, referring to a battery of presentations on how Israeli innovation is improving lives worldwide and how American funding for missile defense has allowed Israel to flourish. “We must understand that we are not lobbying today for legislation. We are lobbying for life."

A senior staffer on the U.S. House of Representatives Armed Services Committee told JTA the cuts would amount to 5 percent of the annual allocation, or $155 million, an amount confirmed by a pro-Israel official. The House staffer said funding for missile defense programs also would be affected.

The other legislation backed by AIPAC would sharpen Iran sanctions and call on the president to back Israel should it feel "compelled" to attack Iran to prevent it from acquiring nuclear weapons capability.

AIPAC’s effort to maintain current levels of foreign assistance comes after weeks in which Republicans and Democrats, caught up in marathon budget negotiations, have made Israel and the Iran threat a talking point. John Kerry, in one of his first acts as secretary of state, warned Senate appropriators that aid to Israel could be affected by the sequester.

On Feb. 27, freshman Jewish Sen. Brian Schatz (D-Hawaii), attending what was supposed to be a bipartisan tribute to the Iron Dome missile defense system, made an urgent appeal to the Jewish leaders assembled in the stately Russell Building conference room.

“With the sequester looming and deep defense cuts coming, Congress must act,” he said. “My colleagues must come together once again and protect funding for critical programs such as this.”

It’s a message that has resonated in Israel, where Finance Minister Yuval Steinitz said at Sunday’s Cabinet meeting that potential cuts had him “very worried.”

Republicans have cited the Iran threat in charging the Obama administration with reckless defense cuts in the name of the sequester; Sen. John McCain (R-Ariz.) called last month’s recall of an aircraft carrier from the Persian Gulf “catastrophic.”

Amos Yadlin, a former Israeli military defense chief, said at the conference that he was “quite concerned” that the carrier’s removal reduced the credible threat of a military strike should Iran advance toward a nuclear weapon.

Dan Meridor, a deputy prime minister in the outgoing Israeli government, said the cuts constituted just one aspect of growing anxiety in Israel about the American posture in the region.

"There is a larger issue here, the role of America and the shaping of America in the Middle East," Meridor said Tuesday in a conference call organized by the Israel Policy Forum. "The specter of the Arab Spring and the Iranian threat is a major issue not only for us, but for the Arab countries."

In an interview, a top congressional Republican aide said that such politicking was par for the course and would not affect AIPAC’s profile on the Hill. Lobbies advocate for their cause and are not expected to take into account Democratic arguments for increased taxes and Republican arguments for spending cuts.

“Both sides can list off the bad things that come from sequestration,” the aide said. “Throwing Israel into it is a red herring.”